Review: “Wig Out!” at Studio Theatre

Tarell Alvin McCraney’s Wig Out! (★★★★) should hit close to home for those living, or living for, black LGBTQ underground ball and drag culture. The Ovid-inspired, music-filled romantic drama might appear to take place in some Oz-adjacent land where Jay-Z is the Wizard, Bey is the Good Witch of the South, realness means well-faked, and worthy queens are blessed by ever-billowing wind machines. But aren’t we all worthy?

Not always, as the Fates might remind us. The dazzling trio — Faith (Dane Figueroa Edidi), Fate (Melissa Victor), and Fay (Ysabel Jasa) — are the singing, dancing chorus that chime in with just the right tune, be it SWV, Xscape or N.E., on cue with each significant turn of the plot, which follows drag queen Ms. Nina, played with tender strength and self-assurance by Michael Rishawn, as she embarks on a halting courtship with Eric (Jaysen Wright), a cute boy she meets on the subway.

Attracted yet reticent, Eric explains that he likes his men masculine, so Nina obliges, introducing him to her boy side, Wilson. Played for the light humor of the quick switcheroo, director Kent Gash’s nimble staging of Nina/Wilson and Eric’s first meeting captures the profound statement of this gay man’s emphatic expression of both feminine and masculine identity.

Nina, fortunately, has found in the ball culture a community that feeds her confidence, and, estranged from her own family, has found a new one in the House of Light, run with a firm hand by house Father Lucian (Michael Kevin Darnall). He leads beside house Mother, drag queen Rey-Rey (Jamyl Dobson), who is recognized as Legendary among all the houses, although her status has of late come into question.

At a ball, unworthy gets chopped, or dismissed. But in life, defining who’s worthy can be a far greater dilemma than deciding who slayed on the ballroom floor. The ensemble has a good time working that floor to the crowd’s delight, while McCraney’s drama plumbs the thorny mess of emotions and notions, external pressure and internalized prejudice, that affect whether two people decide to stick it out, or move on for the sake of their happiness and self-respect. Bound up in those decisions are the expectations Nina, Eric, Lucian, and Rey-Rey have for themselves, or have to live up to, as gay men, friends, and family. For every amorous pair in Wig Out!, who’s on top is a matter not to be determined just by gender traits or presentation.

While occasionally melodramatic in its presentation, the production never stops serving glamour, fashion, sexiness, humor, and insight. Set designer Jason Sherwood, building naturally around a narrow runway, has crafted a space decorated as an ode to gay history and black fabulousness, the walls busily adorned with photos and mementoes representing icons from Angela Davis to Frank Ocean, and acknowledging the struggle against HIV/AIDS.

Also engaging in flights of fancy — like Eric’s drag-infused dream sequence resembling something from American Horror Story: Butch Queen — the show throws a breathlessly entertaining house ball for much of the second act. The talented company delivers voguing, gowns, smoke, mirrors, a drum-tight lip sync by Serena (Frank Britton), Mother of the House of Di’Abolique, and a well-timed use of Stravinsky’s “Firebird.” And the Fates are the jukebox that keeps on giving, jubilantly spinning through Destiny’s Child, Dreamgirls, and even hits like “I Don’t Want to be Alone Tonight,” an underrated girl-group jam from Spike Lee’s School Daze.

McCraney ponders gender and sexuality from a transgressive point-of-view, adding the audacious twist of Nina feeling at times as confined by her femme identity as her alter-ego Wilson is by the conventions of black masculinity. Rishawn is persuasive in depicting every facet of the character’s persona. Wright, meanwhile, conveys a puppy dog curiosity that endears. Future productions will labor to find any actor who so adorably puts forth Eric’s naiveté, along with the sex appeal of a boy who’s not that innocent.

Wig Out! at Studio Theatre 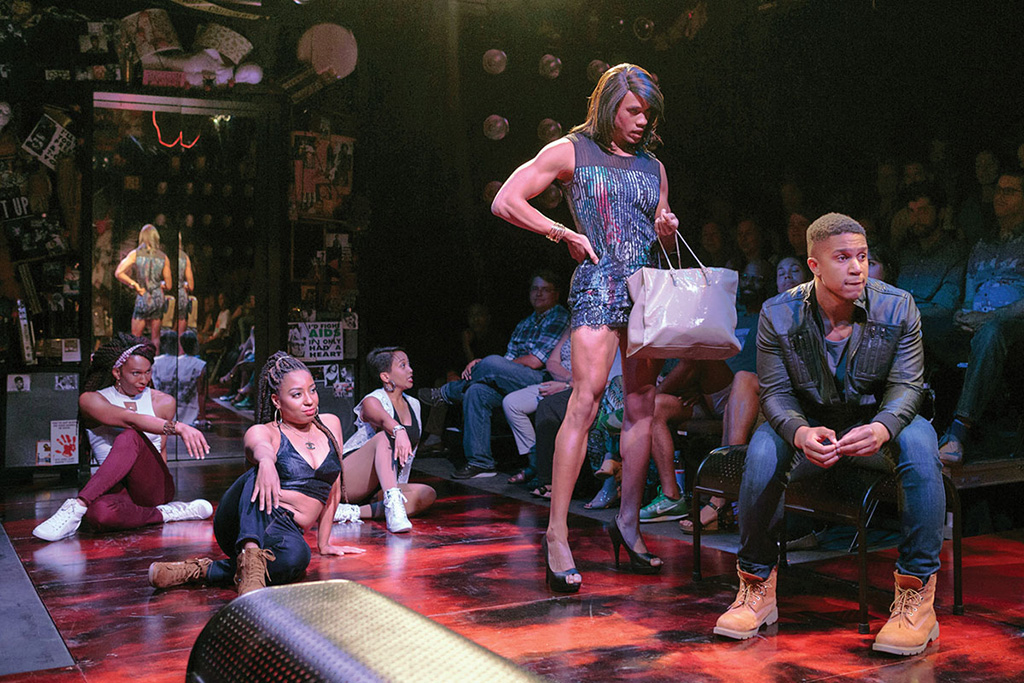 André Hereford covers arts and entertainment for Metro Weekly. He can be reached at ahereford@metroweekly.com. Follow him on Twitter at @here4andre.
← Previous Story Review: “Cabaret” at the Kennedy Center
Next Story → Review: The King and I at Kennedy Center