By John Riley on August 3, 2017 @JohnAndresRiley 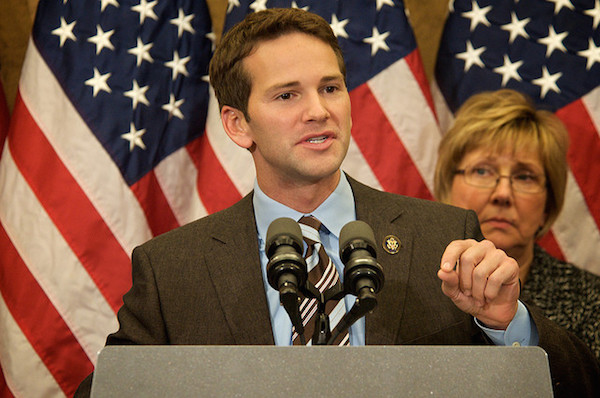 Lawyers for former U.S. Rep. Aaron Schock (R-Ill.) are accusing federal investigators of prosecutorial misconduct, alleging that they have improperly probed into personal details of Schock’s life by asking witnesses about his sex life and if he is gay.

Schock was indicted in November on 24 counts of wire fraud, mail fraud, theft of government funds, making false statements, filing false reports with federal election officials, and six counts of filing false tax returns. He has been under investigation since resigning from Congress in March 2015 following questions over whether he had violated spending and ethics rules.

In the course of that investigation, other red flags were raised regarding Schock’s spending decisions, including expensive trips abroad with a private photographer, tickets to concerts and sporting events, and the redecoration of his congressional office that was reportedly based on the PBS drama Downton Abbey.

But now Schock’s lawyers are crying foul, alleging that federal investigators have probed into personal details of his life that are not germane to the charges against him or his spending habits, reports the Chicago Sun-Times.

In a memo filed in federal court, Schock’s legal team alleges that the “prosecutor and agents have dug into every aspect of Mr. Shock’s life by any means necessary. No topic has been off limits. The federal government has even delved, repeatedly, into the most intimate details of his life, including repeated inquiries to witnesses into who he has slept with and whether he is gay.

“The prosecutor and federal agents have repeatedly asked irrelevant and highly invasive questions about Mr. Schock’s sexual orientation and relationships,” his lawyers write. “The government has investigated nearly every facet of Mr. Schock’s professional, political, and personal life. This even includes his sex life.

“It is no secret that there has long been speculative gossip in the media about Mr. Schock’s sexual orientation. For no apparent reason, the government has felt itself compelled to investigate this too. Indeed, from the very inception of this investigation, the government has discussed with witnesses whether Mr. Schock is gay, whether he really ‘dated’ his ex-girlfriend (a highly accomplished diplomat and attorney), and whether he spent the night or shared hotel rooms with her.

“The government’s inquiries into Mr. Schock’s sexuality and romantic relationships were not just distasteful and offensive. They were prejudicial.”

Prosecutors have never said that Schock’s sexual predilections were related to any of the charges against him. A spokeswoman for the U.S. Attorney for the Central District of Illinois, which is prosecuting Schock, has declined to comment on the allegations.

Schock’s trial is scheduled for January 2018 before a federal court judge in Urbana, Ill. His lawyers contend that the prosecution intimidated witnesses and exposed them to “false information” about Schock. They also allege that federal investigators improperly turned a junior staffer in Schock’s Peoria office into a “confidential informant” who secretly recorded him and stole documents. As such, they argue, the judge should throw out any evidence against Schock that the staffer provided to the government.

John Riley is the local news reporter for Metro Weekly. He can be reached at jriley@metroweekly.com
← Previous Story American Muslims more accepting of homosexuality than white evangelicals
Next Story → Calls to suicide hotline spike after introduction of trans military ban and Texas bathroom bill