It's torture being married to an artist in Darren Aronofsky's wacky psychological horror spectacle "Mother!"

Among mainstream filmmakers, few proceed with as much confidence as writer-director Darren Aronofsky in the conviction that a film can confound the audience yet still keep them riveted to the action. Prepare to be confounded.

The question that so often arises in Aronofsky’s movies presents itself early in his latest, Mother! (★★★) — is this even taking place in the “real world,” or is it the fevered dream of a drug addict? Maybe it’s the paranoid mind of a math genius or a deranged ballerina? Wait, did Jennifer Connelly just sprout a demon tail, or is that a sex toy?

Friction between real versus imagined worlds added poignancy to Aronofsky’s bleak, hallucinatory drama Requiem for a Dream, and ignited his Oscar-winning thriller, Black Swan. But what in the ever-living fuck is going on in this latest allegorical horror puzzlement?

Set entirely within a voluminous, old Victorian fixer-upper planted squarely in a field of golden grasses, the film stars Jennifer Lawrence as Mother. It’s a champion bull-rider performance, as the actress saddles up for this weirdness and hangs on for dear life.

Mother (neither she nor any other characters are named on-screen) is a muse in white gossamer gowns to her beloved poet husband, Him, played with alternating brightness and brutishness by Javier Bardem. While husband tries to recapture the inspiration that produced his most celebrated work, Mother, seemingly more devoted to his creativity than to her own, nevertheless paints, plumbs, and repairs their gorgeous, covetable home.

Clearly, Mother is as much of an artist, or at least as creative, but in her delicate, feminine way, she defers to her husband’s need to write above all other things. There’s a streak of The Shining‘s Jack and Wendy Torrance in the couple, particularly as empty pages make it apparent that the poet’s great light has dimmed, and unexplained patches of blood throughout the vast house suggest a supernatural presence. Mother herself convulses with visions of a burnt, beating heart buried inside the walls.

Lawrence carries the burden of conveying the film’s heart — and its terror. Longtime Aronofsky cinematographer Matthew Libatique’s camera caresses Mother’s wide, alert eyes and womanly curves, as she confronts the same questions that, no doubt, will puzzle audience members.

What issues are so plaguing this couple’s marriage that any time Mother wakes to find Him out of bed, she must immediately jump up to search the house for him? How is she getting any painting done with such an extremely deliberate process? Who keeps fresh linens in a trunk in the cellar? And how does anyone arrive at this house in the middle of a field?

On that count, the director cheats by never showing the house’s full exterior. But guests do arrive. The first knock at the door is a Man (Ed Harris), who claims to be just a boring orthopedic surgeon visiting a local hospital. Rashly, without any consent from Mother, the husband invites the Man to stay with them in their remote, empty, out-of-cellphone-range house in a field. Rightly upset, Mother becomes downright fearful when she learns that the man is not who he claimed to be.

As a horror film, Mother! earns points by defying certain genre expectations, and plowing head-on into others, like the consistently unnerving way Mother’s husband and this stranger don’t acknowledge the increasingly bizarre turn of events. Case in point, the Man’s wife (Michelle Pfeiffer) shows up, and not only makes no effort to ingratiate herself with her hostess, but openly disdains Mother, a provocation that draws little commiseration or concern from Him. Who are these people?

For starters, the Man and Woman are horrible houseguests — messy, rude, and utterly disrespectful of Mother and Him’s rules. They plop their dirty laundry onto this couple’s floor, and into their lives. It’s surprising how quickly an invasion of strange guests leads to bloody murder.

What begins as merely a stunning imposition begets an onslaught of fanatical interlopers, that erupts into unimaginably outlandish domestic chaos. Crazed autograph hounds, rapists, thieves, and more (and more!) victimize Mother and Him in their home, although she most definitely bears the brunt of victimhood. Mother is beaten, and endures a host’s nightmare: cretins who shovel into your quiches and make out on your un-braced countertops.

It’s hilarious, and horrifying, and preposterous all at once. No less so is the wild scene depicting Him’s poetry as the quintessence of creation, tear-inducing word magic that literally brings life and color to the world. Many viewers might check out before then. However, those entranced by the lush imagery and creepy, creaky sound design might arrive at the film’s late-act hints that tip this from over-the-top thriller towards a knowingly meta vision of what hell it might be to live with a famous and celebrated artist. 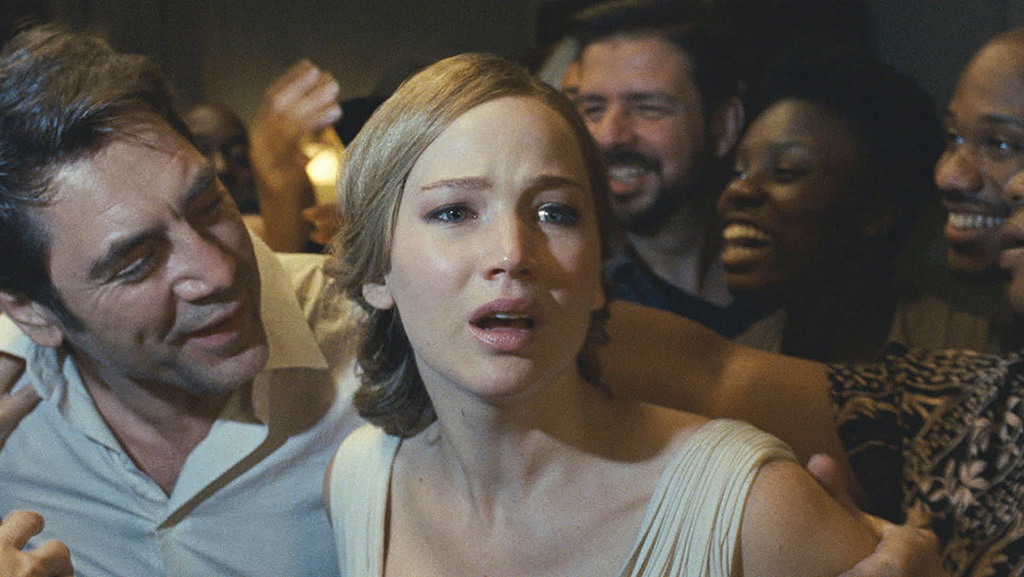 André Hereford covers arts and entertainment for Metro Weekly. He can be reached at ahereford@metroweekly.com. Follow him on Twitter at @here4andre.
← Previous Story DC Shorts Film Festival kicks off September 7
Next Story → An Evening With Bernard-Henri Lévy at Washington Jewish Film Festival