Even if people hypothetically support the "right of refusal," they still oppose denying service to gay and lesbian couples

By John Riley on September 26, 2017 @JohnAndresRiley 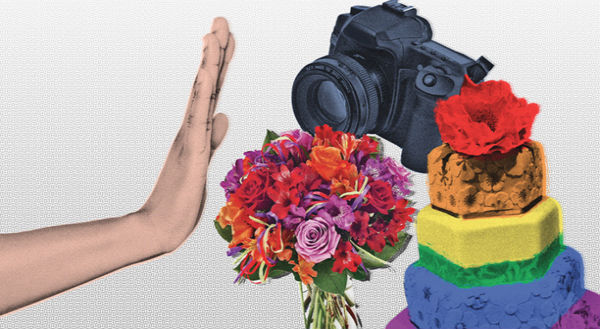 An online survey finds that a majority of Americans, and an even higher number of wedding professionals, do not support allowing wedding-related businesses to refuse service to same-sex couples.

The survey, conducted by MBKInsights, polled more than 1200 adults from across the nation and 197 wedding industry professionals about their opinions on the right of wedding-related businesses to refuse service to same-sex couples. According to its findings, 60% of Americans believe that professionals, like photographers, wedding planners, and florists, should not be allowed to refuse service to same-sex couples, while 64% percent of wedding professionals oppose such discrimination.

Kathryn Hamm, the publisher of GayWeddings and Education Expert for WeddingWire, notes that she was particularly surprised by a trend revealed in the study: that nearly all respondents, even those who support the concept of refusing service, felt compelled to add that businesses shouldn’t discriminate against same-sex couples.

“To me, this is a positive sign that same-sex couples can expect even more support from the public and within the wedding industry than research reveals at first glance,” Hamm said in a statement.

The survey’s other findings show that 73% of self-identified LGBTQ individuals are more likely to oppose refusals of same-sex couples than heterosexuals, only 57% of whom oppose such discrimination.

Regionally, New England is the most progressive region, with 69% of people opposing service refusal, with support hovering around or just under 60% in the Mid-Atlantic, South Atlantic, Mountain, and Pacific regions. Unsurprisingly, respondents from the East North Central (covering the Rust Belt), East South Central (Kentucky, Tennessee, Alabama and Mississippi), and West South Central (Texas, Oklahoma) regions were more closely divided on the issue. However, there was no region in which those who support refusing service to gay couples outnumbered those who oppose it.

Specifically, for the D.C. area, 65% of respondents from Virginia, Maryland and the District thought wedding professionals should not be allowed to refuse service to same-sex couples, while only 19% thought they should.

Majorities of every racial group and age group were opposed to refusals, with Caucasians and millennials, respectively, topping the list of those leading the opposition.

The findings among those wedding professionals surveyed match up with a 2016 survey by WeddingWire that found that 89% of wedding correspondents said they were “ready, willing and able” to serve same-sex couples. Thus, even if they support the concept of religious-based refusals in theory, many florists, photographers, bakers, caterers, or others in the wedding industry have no problem serving same-sex couples themselves.

The survey comes just as the Supreme Court prepares to hear the case of Jack Phillips, owner of Masterpiece Cakeshop in Lakewood, Colo., who is challenging his state’s law prohibiting discrimination based on sexual orientation by arguing that forcing him and other “creative professionals” to provide services for same-sex weddings violates their First Amendment rights to free speech and freedom of artistic expression.

Yet ADF’s legal rationale seems not to hold water when placed under public scrutiny. When asked what reasons were acceptable when it comes to allowing wedding professionals to refuse service to gay and lesbian couples, only 10% of the general public thought that  either “freedom of speech” or “freedom of artistic expression” were legitimate reasons for refusals. That combined percentage rises to 22% among wedding professionals, but is still a minority viewpoint even among those who work in the wedding industry.

“This question of what the wedding industry as a whole thinks about service refusal has been completely overlooked in favor of the stories of wedding professionals like Jack Phillips (of Masterpiece Cakeshop) and Barronelle Stutzman (of Arlene’s Flowers),” Hamm said in a statement.

“The question of where the freedom of religion or speech of one person ends and the civil rights of another begins is certainly an important one to be resolved and will have its day in court this fall,” she added. “But the debate shouldn’t eclipse the fact that the vast majority of the wedding industry has been open and ready to serve same-sex couples for many years.”