Shirine Babb rules all in "Antony and Cleopatra"

The whip end of the doomed love affair between two of history’s most iconic figures, Shakespeare’s Antony and Cleopatra (★★★) is an interesting animal. Not quite historical drama, not quite lover’s tragedy, it nevertheless has something for pretty much everyone: a lusty romance, arguing Romans, unloved wives, the suggestion of land and sea battles, and the awesomely creepy idea of suicide by viper. What’s not to love?

Plenty, if it’s produced without vision. Because with so much in play here, a production can quickly feel more like the cataloguing of a lot of comings and goings instead of what it should be — an epically tragic love affair straddling two uneasy empires. Grasping the nettle of this dilemma, the already small Folger Theatre goes super-intimate by staging the production in-the-round. With a much closer audience, this is the place for something crucial to this particular play: personality. Offering a believably compelling Antony and Cleopatra is the only way to keep their bond passionate and immediate amid the many interludes for battle and discourse in Rome.

Here, in director Robert Richmond’s cozy circle, creatively lit by Andrew F. Griffin, are a real Antony and Cleopatra. They may deliver grand and beautiful language, they may go to war or die by asp, but they are without question, living, breathing people who smirk, cuddle, and lose their tempers.

A magnificent Cleopatra, Shirine Babb exudes the necessary countenance in the gorgeous garb of Mariah Hale. But she is never aloof, never removed, and always warm to the touch. She may pronounce or demand, but she is deeply human — she strokes, she cries and she shows the vulnerability in her anger. Her command of the language is pure magic. Indeed, Babb is the reason to see this production. The only regret is that the revolving stage is not activated during her death scene so that more of the audience can see her expressive face as she chooses her fate.

Of course, Cleopatra’s chemistry with Antony is pivotal and one gets the idea here of why these near-opposites would attract, even if, despite a lot of enthusiasm, things never quite ignite. Still, this is an interesting Antony. Like Cleopatra, Cody Nickell plays his Roman for personality in a venue where it counts. He is an ironic, playful and quick-tempered leader and it does much to explain why he would eschew his duties to spend his time with this fascinating foreign queen. Though a tad more nuance on his delivery wouldn’t hurt, Nickell is, without doubt, a prime example of how to keep Antony from being woodenly earnest. No small feat.

A standout is Nigel Gore, whose quietly electric presence and appealingly working-class — but beautifully issued — Shakespeare makes for a stellar Enobarbus, Antony’s trusted friend. Chris Genebach is a gratifyingly forceful Agrippa, while Anthony Michael Martinez gives his Soothsayer some attractive edge. As Octavius Caesar, Dylan Paul is a nicely-balancing presence, but (and this is not on him) the twenty-first century “bro” hair is a distraction.

Finally, in a production so attuned to the music of its creator, it is rather jarring to end on a voice that is less Valley of the Kings than Valley Girl, no matter how touchingly expressed.

Antony and Cleopatra at Folger Theatre 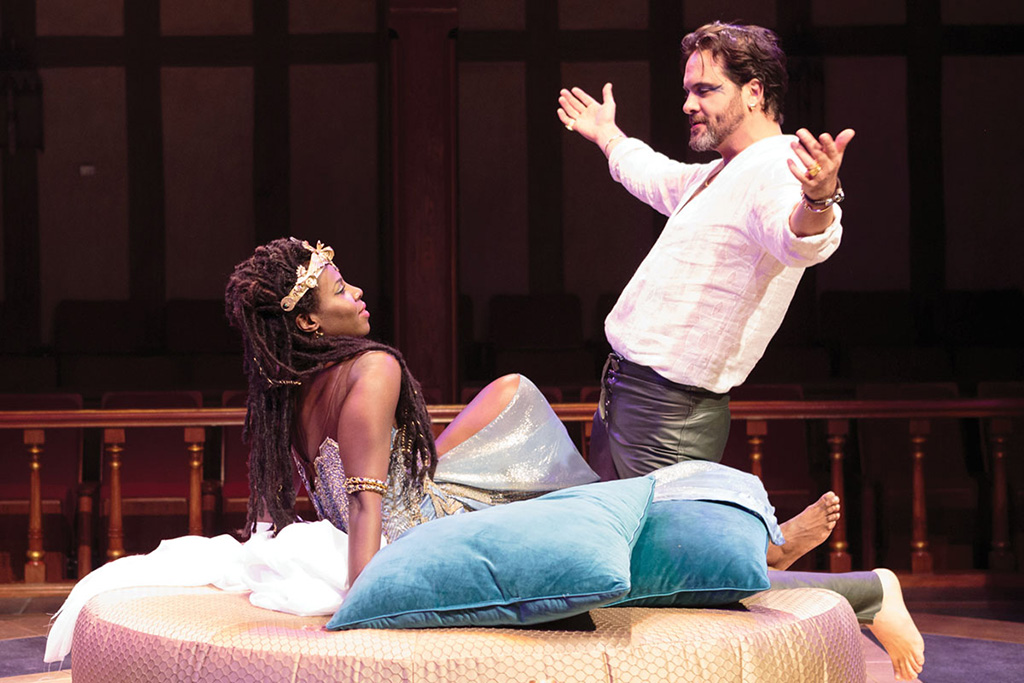 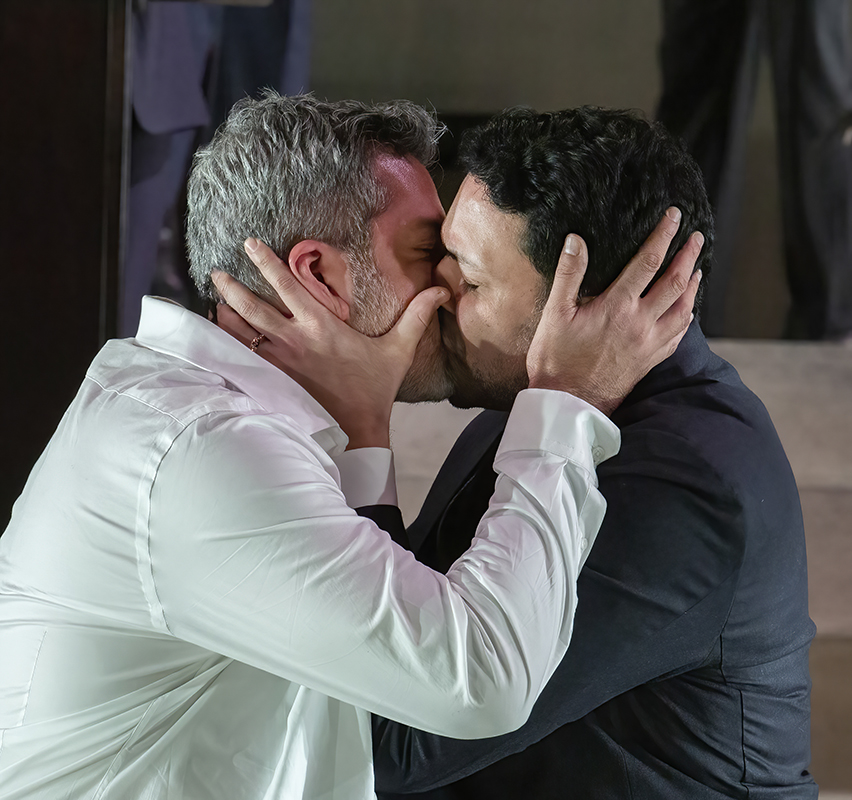 Shakespeare might have left it open for debate whether Antonio and Bassanio in The Merchant of Venice share an affection like friends, like father and son, or like "bosom lovers," but the play leaves no question that, for Antonio, Bassanio's happiness is worth risking riches, reputation, and a pound of flesh.

The script implies much in the pair's intense devotion, and director Arin Arbus' boldly queer production of The Merchant of Venice (★★★★☆) at the Shakespeare Theatre Company merely makes their attraction plain. Alfredo Narciso as Antonio and Sanjit De Silva as Bassanio cast a riveting spell as paramours who have reached a crossroads, now that Bassanio yearns to marry the heiress Portia (Isabel Arraiza).