Review: Harold Pinter’s “The Lover” and “The Collection”

Don’t let Harold Pinter’s labels put you off. Yes, he hails from Absurdist roots, and yes, his plays tend towards the avant-garde, but see the Shakespeare Theatre Company’s The Lover and The Collection (★★★★) with an open mind, and it will be quietly, wonderfully blown.

The two short plays, each set in a defining moment of coupledom, are ruthless, delicious displays of the not-so-subterranean complexities of marriage. Far more than the usual battle of wills, both dramas describe the deeper torsions of monogamy. If they are exaggerated and mannered (and sometimes very funny), they are not here to explain, but to stimulate. As such, they raise as many questions as they answer. If you can simply go with it, they deliver on the fundamental tension of the love relationship: the never-quite-settled see-saw between the amorphous “we” and the secret needs and insecurities of the “me.” If you have ever truly committed to another person — and are utterly honest with yourself — these plays will resonate on one level or another.

But Pinter is tricky to stage. His absurdist constructs — conventional couples allowing themselves into ever-deeper ambiguity — will fail for silliness in the wrong hands. And the stark poetry of Pinter’s language, in which the silences and mundanities are loaded with meaning, will also perish without mastery. It is all far easier said than done. Which makes seeing these two productions, performed back-to-back, so imperative an experience. This is Pinter done well, and in the case of The Lover, brilliantly. It is a rare opportunity.

The joy in the productions is in director Michael Kahn’s exquisite sensibility: it’s Pinter delivered with orchestral passion. Every word, every movement, every look counts. Kahn’s highly-flavored vision begins with his choice to keep the plays in the time and place in which they were written — early 1960s England. This is not the Spy Who Shagged Me London, this is the far more sedate reality of a still post-war Britain. Despite signs of a sleek new aesthetic, the colors are demure, the buildings old, the wattage low. The strong sense of place is beautifully suggested in Debra Booth’s MCM sets and the temperate lighting of Mary Louise Geiger. The mood intrigues; it is both cozy and alien, familiar and foreign — much like Pinter’s puzzles.

The stronger of the two productions, The Lover, offers Sarah and Richard, a seemingly conventional couple married for ten years. Within moments, however, we learn that Sarah will be entertaining her lover while Richard is at work. And so the questions begin: Why doesn’t Richard seem to mind? Or does he? Is Sarah at the vanguard of the swinging sixties, or is there something else driving her? When Sarah’s lover arrives, the questions compound — and so do the complexities. There is a chess game of needs and wants here, but, as in any relationship, the definition of what it means to win is almost completely subjective.

The show-stopper is Lisa Dwan as Sarah, a woman whose inscrutability masks a world of wants. Dwan couldn’t be more simpatico with Pinter. She captures Sarah’s devotion to her (often comical) veneers: the pointless tidying of the bourgeois housewife, the preening of the bombshell adulteress. But Dwan truly amazes in her ability to move seamlessly between these surfaces and the deep ambiguities of Pinter’s subterranean world. Absurdly nonchalant one minute, agitated with insecurity and anger the next, she embodies the need at the heart of the piece. Her voice is an extraordinary instrument and she uses it to “play” Pinter with much nuance.

As Sarah’s husband Richard, Patrick Kennedy is a good match. His frustration with his wife’s needs is credible, his ambivalence effectively unsettling. Both Kennedy and Dwan serve the piece well by playing it straight when it counts, and thus turning the (fully intended) confusion into a powerful component.

Though delivered in another equally evocative set, The Collection has more narrative but ultimately a tad less power. When James believes wife Stella has been unfaithful on a business trip, he goes in search of the other man. He finds Bill in residence with the much older and wealthier Harry and thus emerges a quadrangle of deceptions, self and otherwise. In the role of Stella, Dwan’s accent is less defining (compared to her Sarah, where it works to such excellent effect) and her expressiveness slightly less attuned, but she is nevertheless riveting. As husband James, Kennedy again carries the man well and is convincing as the passive-aggressive sometime-cuckold.

In the role of the older man, Harry, Jack Koenig delivers a credible establishment figure, capturing his vulnerability but also his implied threat. Least in sync is Patrick Ball as Bill, the young man at the center of the mysterious events. Bill is a tough character to pull off, not least because he is often silent. He plays games — sometimes self-destructive ones — and he must suggest this subtle kind of doomed canniness. Despite some great charisma, Ball lands just slightly too much on the self-conscious side of Pinter’s mannered characterization (a less than stellar accent doesn’t help) and it is hard to read in quite enough subtext.

Such quibbles aside, this is Pinter delivered with wit, clarity and mid-century style. The one-acts, originally written for British television, are rarely staged theatrically, making this even more of a once-in-a-lifetime opportunity you don’t want to miss.

The Lover and The Collection by Shakespeare Theatre Company 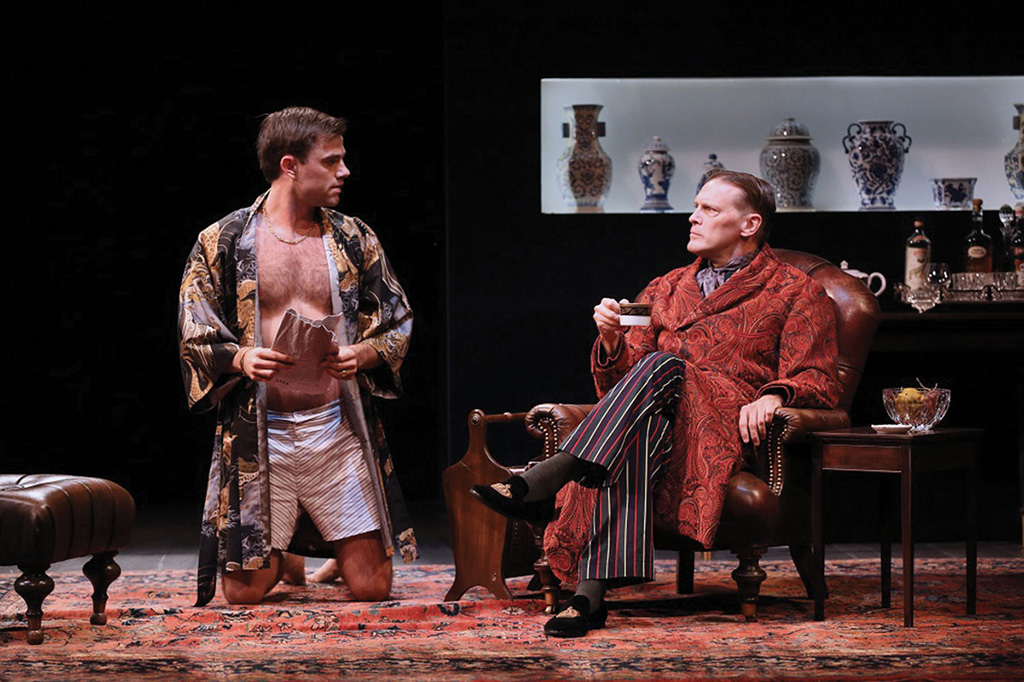