Civil rights advocates alarmed by nomination of Gregory Katsas to the D.C. Circuit Court of Appeals

By John Riley on November 9, 2017 @JohnAndresRiley 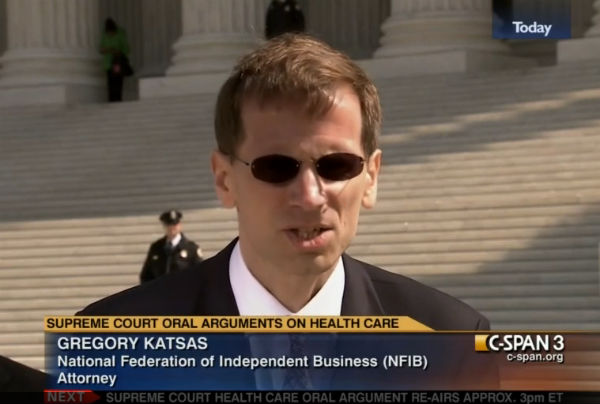 On Thursday, the Senate Judiciary Committee advanced the nomination of Gregory Katsas to be a judge on the U.S. Court of Appeals for the D.C. Circuit, alarming LGBTQ groups concerned over Katsas’ anti-LGBTQ views.

Katsas currently serves as White House Deputy Council under President Trump, and previously worked as a former Assistant U.S. Attorney General under the George W. Bush administration. He also specialized in civil and appellate litigation at the conservative Washington firm Jones Day. He is a longtime member of the Federalist Society, a right-wing legal organization whose members believe in an “originalist” approach to the law, meaning adhering to a strict, literal interpretation of various statutes.

Throughout his career, Katsas has amassed a record of arguing against LGBTQ rights and protections, having previously defended the Defense of Marriage Act multiple times in court. He has argued that there were legal arguments for why the law, which banned same-sex couples from getting married, should be considered constitutional — the opposite of what the Supreme Court found when it heard Edie Windsor’s challenge to the law in 2013.

Katsas has also been quoted as saying it is “self-evident” that “the best arrangement for a child is to be raised by both of the child’s biological parents,” and has criticized the Supreme Court’s decision in the 2015 Obergefell case that legalized marriage equality. He has also responded to inquiries from Democrats on the Judiciary Committee about his objection to laws prohibiting discrimination in public accommodations, which he feels is an example of the government “seek[ing] to compel individuals opposed to same-sex marriage on religious grounds to provide some degree of affirmative support to the practice.”

Notably, Katsas, in his role as Deputy Counsel for the White House, has admitted to working with the Trump administration to push forward a ban on allowing transgender individuals to serve in the U.S. military and on guidance to rescind Title IX protections for transgender students in public schools.

LGBTQ and civil rights groups have previously come out in opposition to Katsas’ nomination.

“With the nomination of Gregory Katsas, President Trump and his administration are working to stack the courts with judges seeking to solidify their dangerous anti-LGBTQ agenda into law,” Sarah Kate Ellis, the president and CEO of GLAAD, said in a statement.

“Katsas has admitted to working behind the scenes with Trump on his plan to purge qualified service members who happen to be transgender from the U.S. military and reversing nondiscrimination protections for trans youth at school,” Ellis continued. “These deeply troubling actions only scratch the surface of Katsas’ anti-LGBTQ record, all of which must be taken in full account by the United States Senate as reason to reject his advancement to the circuit court bench.”

Ellis noted that the confirmation of judges like Katsas could have a detrimental impact on the future of LGBTQ rights in the courts. Since taking office, President Trump has sought recommendations from conservative think tanks or interest groups, like the Federalist Society, for the names of judicial nominees with conservative bona fides who can be appointed to 114 federal court vacancies.

Ellis’ charge that President Trump is seeking to stack the courts with judges who will uphold the administration’s policies has also been alleged by the Leadership Conference on Civil and Human Rights, which has spoken out against other Trump judicial nominees that have a record of hostility towards the LGBTQ community.

Vanita Gupta, the CEO of the Leadership Conference on Civil and Human Rights, previously wrote a letter to senators outlining the reasons for why they should reject Katsas’ nomination.

“Mr. Katsas has advanced an agenda to restrict voting rights, LGBT rights, and access to women’s health,” Gupta wrote in her letter. “He has also worked to expand executive power at the expense of civil liberties. A longtime member of the Federalist Society and former law clerk to Supreme Court Justice Clarence Thomas, Mr. Katsas has advanced his ultraconservative agenda in high level positions in both the Trump administration and Bush administration. He has not demonstrated the necessary independence and fair-mindedness needed to serve in a lifetime appointment on the powerful D.C. Circuit.

“In his Senate questionnaire, Mr. Katsas indicated that he is involved in ‘interviewing and recommending candidates for various executive and judicial appointments,'” Gupta continued. “President Trump has nominated a long list of extreme nominees who were interviewed and vetted by Mr. Katsas. Confirming him would be a continuation of this ongoing effort to remake the federal judiciary so that President Trump’s extreme policies will have a more receptive audience when challenged in court.”

John Riley is the local news reporter for Metro Weekly. He can be reached at jriley@metroweekly.com
← Previous Story Federal court hears arguments over injunction to stop transgender military ban
Next Story → USDA will allow employees to be openly anti-gay at work