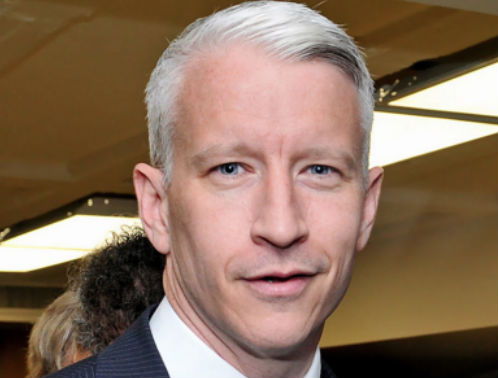 CNN host Anderson Cooper has claimed his Twitter count was hacked, after a tweet was sent to Donald Trump calling him “a pathetic loser.”

Trump tweeted that the “deck was stacked” against Roy Moore in the Alabama special election — which Moore lost — and claimed he said that Moore would “not be able to win the General Election.”

The President previously threw his support behind Moore, who has a history of homophobia, transphobia and racism and whose campaign was dogged by accusations of child molestation, urging Alabama voters to help maintain the Republican Party’s narrow majority in the Senate.

Cooper’s account responded to Trump’s claim he was “right” that Moore wouldn’t win, saying, “Oh Really? You endorsed him you tool! Pathetic loser.” 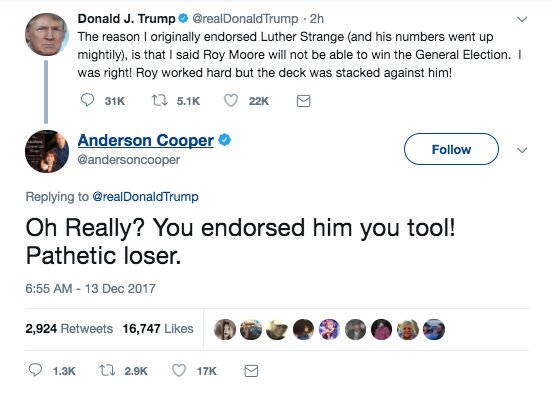 That didn’t stop a number of users responding in support of the tweet, with Holly O’Reilly saying, “Dude, it was epic. You should have just left it,” and Lori Sirianni adding that what the tweet said “wasn’t offensive to most of us.”

Some were less inclined to believe the “hacked” explanation, with @BrandoLauren tweeting, “We all know you were drunk tweeting Trump, happens to the best of us.”

The interaction between Cooper’s account and Trump’s came after Alabama rejected Moore in Tuesday’s special election.

Democrat Doug Jones bested the Republican Moore, who was beset allegations that he had molested a 14-year-old girl and repeatedly dated teenagers while he was in his 30s.

It represented a stunning upset in the predominantly conservative and Republican state, which overwhelmingly voted for Donald Trump in 2016.

In his victory speech, Jones alluded to Moore’s beleaguered campaign.