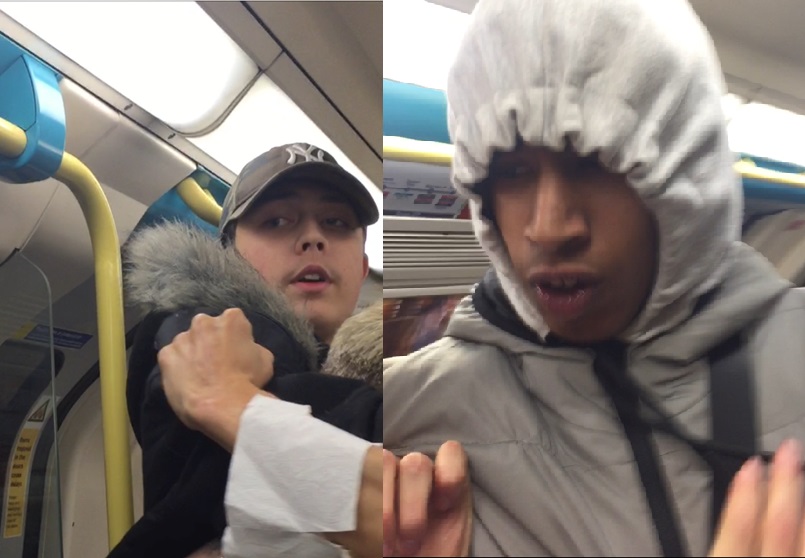 Images released of the attackers by British Transport Police

A 19-year-old British man was strangled and forced to “apologize for being gay” in an apparent hate crime on London’s Underground railway.

The incident took place in October this year, but British Transport Police (BTP) have now released images of two youths who carried out the attack in an attempt to find them.

The victim was traveling with friends to a fancy dress event when the youths boarded the train and began subjecting him to homophobic abuse.

According to police, the victim challenged the youths, which caused them to become “more aggressive.” One of the youths then “pulled the victim from his seat into a headlock, strangling him,” while the other stole his phone and threatened to stab him.

“They demanded the victim apologise for being gay which eventually the victim did as he was struggling to breathe,” BTP said. “They then let him go and handed back his phone and a fight ensued between the victim’s friends and the offenders.”

A 25-year-old woman was “punched and pushed to the ground” in the fight. She sustained bruising, while the victim escaped without any physical injuries.

“Hate crime will not be tolerated,” BTP said. “We believe everyone has the right to travel safely. We won’t tolerate behaviour where someone is targeted because they are perceived to be different, or made to feel uncomfortable on their journey.”

Britain has hate crime laws covering gender identity, sexuality, disability, race, and religion, and include threatening behavior, harassment, and assault among other factors.

According to British LGBTQ charity Stonewall, one in five LGBTQ people in Britain have experienced a hate crime or incident because of their sexual orientation or gender identity in the last 12 months.

And, while this particular incident is being actively investigated, four in five anti-LGBTQ hate crimes apparently go unreported, with younger LGBTQ people being “particularly reluctant to go to the police,” the charity says.