Review: “The Humans” at the Kennedy Center

Stephen Karam's "The Humans" is a gritty, affecting night to remember.

A finely crafted “fly on the wall” view of a family’s Thanksgiving dinner, Stephen Karam’s The Humans (★★★), now at the Kennedy Center Eisenhower Theater, is the kind of play that lets an audience settle in before the fault lines begin to show. To his credit, Karam almost, if not completely, avoids over-egging the batter. There are no crisis hotline topics here, just the slings and arrows of life in the mediocre middle lane. It is about the ache of arthritis, the drag of colitis, unfair layoffs and interminable interim jobs. The art here is in how stealthily close to the bone Karam cuts. At the heart of this family’s personal fray are the truths that affect us all: the little frailties of body, spirit and mind that shape a life and how it ends.

Yet as good as Karam’s exploration is, there is something just a tad — how else to put it — mechanical in his process that tempers the emotional power. Like the almost-perfect humanoid robot, there is an unmistakable sense of the coding behind the eyes. It appears in the forced family sing-along, the revelations that come along like clockwork, and in the final inner crisis of the most emotionally reticent of his characters. If Karam’s dialogue is charmingly realistic with jumbled interruptions, these, too (and despite the casts’ mastery) feel ever-so-slightly calculated.

The play itself aside, the 2016 Tony-winning production, under the hand of director Joe Mantello, has an extraordinariness all its own. It’s not often that sets and sound speak as loudly as the characters, but David Zinn’s evocation of a dingy basement apartment in New York’s Chinatown and Fitz Patton’s evocation of the sounds of an old building are hauntingly authentic. Anyone who has spent a tense first night discovering the unfamiliar noises of neighbors and their activities will shudder with recognition. It is this beautifully conjured, wholly dismal, space that lays so much bear. Away from the trappings of the familiar, life feels fragile, connections unsettled. Everything is grittier in an unloved space with a dirty security door.

But of all the vulnerabilities and old wounds that surface, the plight of Fiona Blake, aka “Momo,” the grandmother with dementia, is by far the most poignant. Though Karam creates the possibilities, it is Lauren Klein’s portrayal that makes this lost soul phenomenally credible. Understated until she is finally gut-wrenching, Klein’s volatile, nonsensical woman speaks to the shadow that lurks in every family. Grandparents, parents and, finally, ourselves — all of us wonder how, when and who will take care of us when our bodies and minds fail. Kama’s characters may joke, cajole, or tenderly wrap a blanket around the legs of a once loving and vital person, but they are playing witness to a ruthless cruelty no one can outrun. Klein delivers this message without pretense, fanfare or cliché — and the desolation is complete.

For Erik Blake, her middle-aged son, caring for an ailing parent is just one of the many pressures revealed over the evening and Karam does an artful job in building the picture of this man who is not just financially, but spiritually underwater. Erik speaks to so much of modern life: Decades of toil that ends in near-poverty, dreams of a lifetime lost to the realities of bills, adult children who are beyond protection. Richard Thomas finds some real music in his man, savoring the rhythm of the dialogue with its cacophonies and its silences, but in truth he never quite convinces as a janitor. In fact, when daughter Brigid jokingly calls this mentally fit man “detective,” it rings far truer. The other challenge is Karam’s eleventh hour contrivance triggering Erik’s final, emotional crescendo. After so much subtlety, it feels forced and drawn out, despite Thomas’ skills. Just watching his mother decline is more than enough.

Although Pamela Reed paints Erik’s wife Deirdre memorably, Karam does not quite have an ear for the long-term marriage — especially one that has hit a shoal. There isn’t enough of the enduring connection, the emotional shorthand, or, for want of a better word, the sheer resignation, that comes with an entrenched relationship. And though Reed keeps Deidre just the right side of cliched Catholic worrywart, she too suffers from Kama’s technical precision. Forget her sudden interest in molecules — she is the first and biggest victim of the bomb that has gone off in Erik’s life. This woman is a talker — why isn’t she talking to her girls?

As the two adult daughters, Daisy Eagan has a believable charisma as Brigid, but she is unsettled in the dynamic, and some of this is again on Karam. When a parent and child snap at each other, things don’t just pop back into cheerfulness, especially when there are old wounds and resentments. As chronically ill Aimee Blake, Therese Plaehn has several very affecting moments, especially when she calls her ex-girlfriend. But her face at times reveals a sister and daughter who too easily trades allegiances. Family members have ulterior motives and long histories, and to watch a family closely is to see such undercurrents played out in jibes, but also in faces. In a smaller but essential role, Luis Vegas, as Brigid’s boyfriend Richard Saad, cutely captures the agony of trying to please in-laws. He makes for a gentle and enduring presence, even if Karam has him say and do things that defy the law of social physics (a 38-year-old really would not be trying to tell Brigid’s working-class parents his dreams).

Still, for whatever doesn’t quite fit here, between the sets, the sounds, and Momo’s horrors, The Humans is a gritty, affecting night to remember.

The Humans at The Kennedy Center 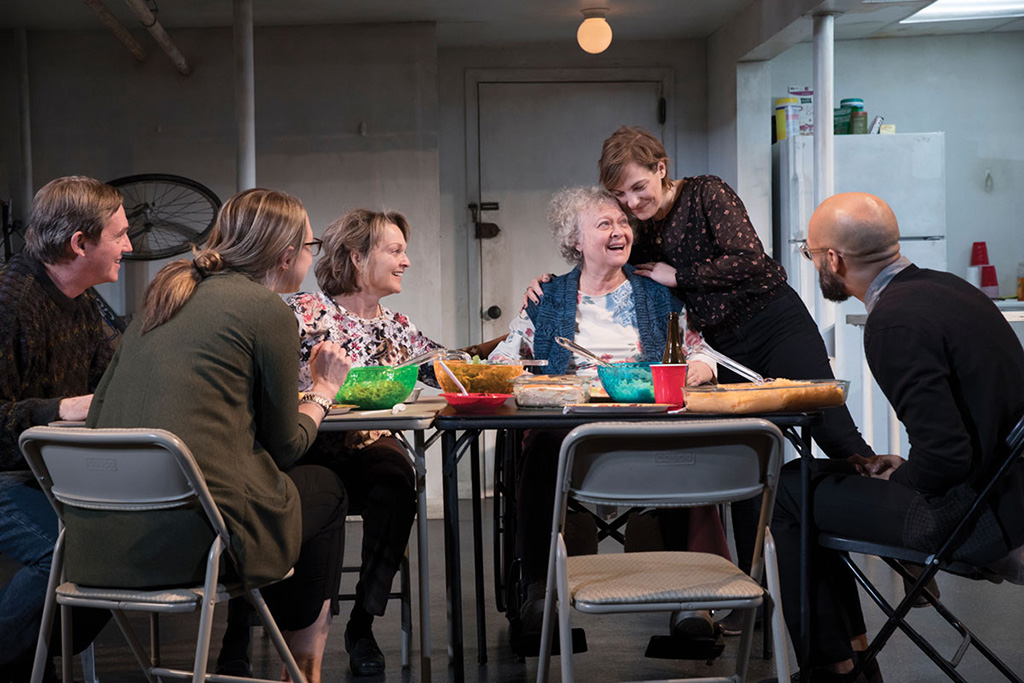