By John Riley on February 19, 2018 @JohnAndresRiley 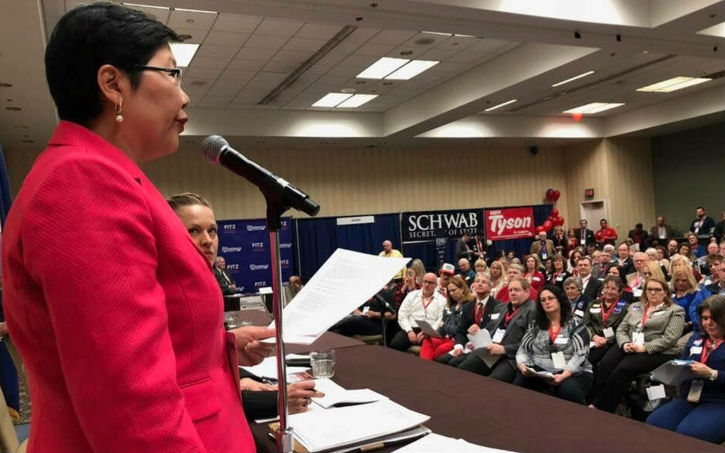 A meeting of the Kansas GOP State Committee – Photo: Republican Party of Kansas, via Facebook.

The Kansas Republican Party has approved a resolution to “oppose all efforts to validate transgender identity.”

The party’s state committee endorsed the resolution on Saturday, while also saying the party recognizes the dignity of those who are gay, lesbian, bisexual and transgender, reports The Wichita Eagle.

“God’s design for gender as determined by biological sex and not by self-perception,” the resolution states. It also notes the Kansas GOP’s opposition to efforts to surgically or hormonally alter an individual’s body to conform with “perceived gender identity.”

Eric Teetsel, the committee member that introduced the resolution and the president of the Family Policy Alliance of Kansas, argued that the resolution was necessary in order to affirm certain principles that are supposed to guide the GOP.

“[U]ltimately, an ideology that says you can determine your own gender identity is broken and it’s going to lead to a lot of pain, and that’s why it’s important to bring us back to what we know to be true and good,” Teetsel told the Eagle.

The resolution was one of several approved during the state convention, including one, also proposed by Teetsel, that emphasizes the importance of “religious freedom.”

The official Republican Party platform is silent on transgender issues but does oppose same-sex marriage, saying “our children’s future is best preserved within the traditional understanding of marriage.”

Teetsel notes that his resolution on human sexuality begins by affirming the dignity of LGBTQ people, something that, he says, shows it is not motivated by animus.

“Ultimately, we are motivated by love,” he said. “It is concern for the well-being of others that drives us to seek out what is true and not just for society, but for them personally.”

But Equality Kansas vehemently disagrees with that characterization of the resolution. The organization issued a statement saying that it was “incredibly disappointed” that Kansas Republicans had promoted “such an undignified and crass assault.”

“This is a cheap election year attack by Sam Brownback’s son-in-law, and yet another attempt to dehumanize those who do not fit inside the narrow world view of Brownback, his family, and his wing of the Republican party,” said Equality Kansas director Tom Witt.

The Kansas GOP, which historically was divided between ultra-conservatives and center-right moderates, has taken a hard-right turn in recent years on social issues, particularly under former Gov. Sam Brownback, who was confirmed last month as the State Department’s Ambassador-at-Large for International Religious Freedom.

During Brownback’s tenure, either the governor or the legislature made several moves to curb LGBTQ rights, whether it was Brownback repealing an executive order prohibiting discrimination against LGBTQ state employees, or the legislature passing a bill to allow on-campus organizations to turn away prospective members who are LGBTQ-identifying.

In 2016, the Kansas Senate also approved a resolution “supporting student privacy and safety” after the Obama administration issued guidance stating that transgender students should be treated according to their gender identity, including being allowed to use restrooms that match their gender identity.