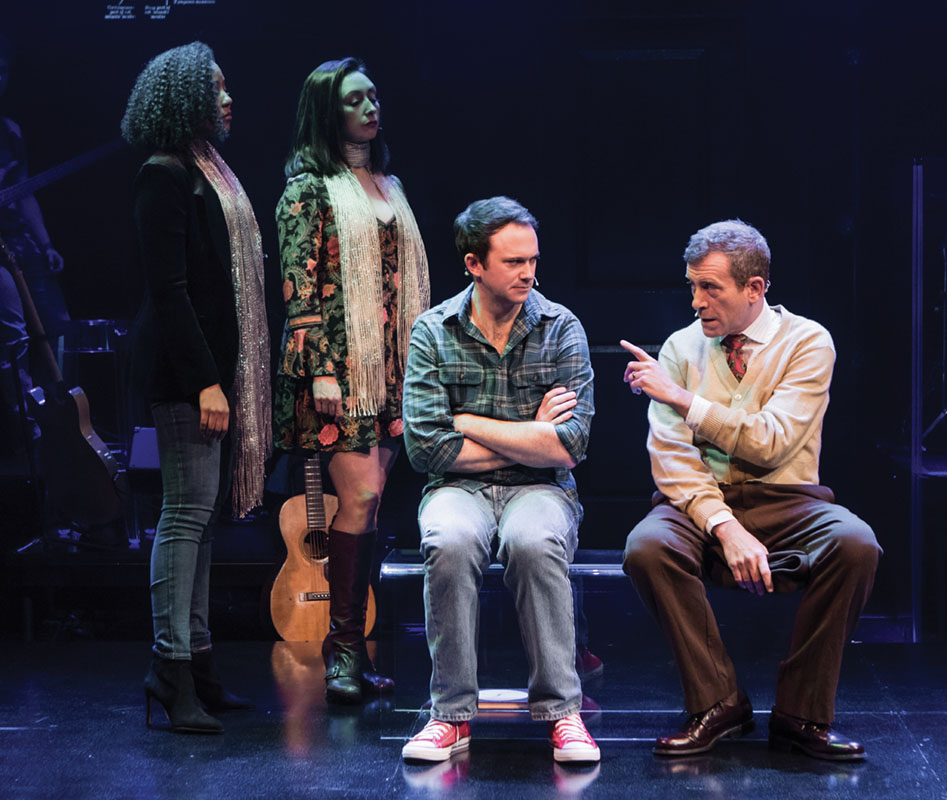 Robbie Schaefer, the show’s star, as well as author of the book, music, and lyrics, even opens with a story about his guitar. That tale turns out to be as compelling as any of the stories he tells about himself in this bland coming-of-age memoir. Imagine an All That Jazz-style autobiography — not about a hot-tempered, iconoclastic, womanizing genius, but instead about an affable singer-guitarist from a reasonably successful indie folk rock band, who doesn’t have problems with pills, booze, and overworking, but instead fell in love at first sight, got married and maybe spent too much time out on the road, until he didn’t. As confessional, or introspective self-portrait of the artist, Light Years is weak tea.

The songs are nice, boasting a textured, Simon & Garfunkel gracefulness that really blooms when the full ensemble — including Natascia Diaz as Robbie’s wife, Annie, and Luke Smith as Middle Robbie — join their voices to deliver melodies and harmonies that are as smooth as marble. The singing cast are all good, and among the vocalists, Schaefer appears to be the strongest interpreter of his contemplative tunes.

But the songs, performed concert-style, don’t much elevate Schaefer’s surprisingly uneventful narrative of growing up musical and hard of hearing, moving with his family from India to Switzerland to Maryland, then finally to Virginia.

What does elevate the piece above being merely a vehicle for a passel of nice original songs by the lead guitarist and vocalist of indie-folk faves Eddie from Ohio are the stories interspersed throughout about Robbie’s father, Konnie. Light Years succeeds as a tribute to fatherhood and to this particular dad, a Jewish immigrant from Austria by way of Romania, whose love, support, and insight helped carve out a world of possibility for his son. The production, directed by Eric Schaeffer, pays additional tribute to Konnie by casting the wonderful Bobby Smith, a treasure to Signature Theatre and every show in which he appears.

Whether singing, unspooling one of Konnie’s anecdotes, or just watching his boy play guitar, Smith holds each moment within the palm of his hand. Konnie’s humor transmits along the frequency of dad jokes about hot nurses and pet parrots, but Smith lands nearly every punchline. And he performs a laughing fit that is easily the most amusing moment in the show.

The writing and the portrayal are generous, allowing Konnie to bear the weight of wisdom and pathos in the story, which eventually works its way around to the subject of the Holocaust. Relative to Robbie’s not-so-rough life story, the swing to such darkness feels somewhat tacked on to add heft to these otherwise very light Light Years.

Yet, it’s during those serious moments with Konnie, whose later descent into dementia is described poignantly as a “gradual kidnapping,” that this journey seems worthwhile. Light Years only beckons with the urgency of a story burning to be told when aiming its gaze not at the son, but at the survivor who made his son feel safe in the world.

André Hereford covers arts and entertainment for Metro Weekly. He can be reached at ahereford@metroweekly.com. Follow him on Twitter at @here4andre.
← Previous Story Review: Long Day’s Journey into Night at Everyman Theatre
Next Story → Review: Heather Raffo’s “Noura” at Shakespeare Theatre