Review: “Hamlet” at Shakespeare Theatre is an absolute must-see 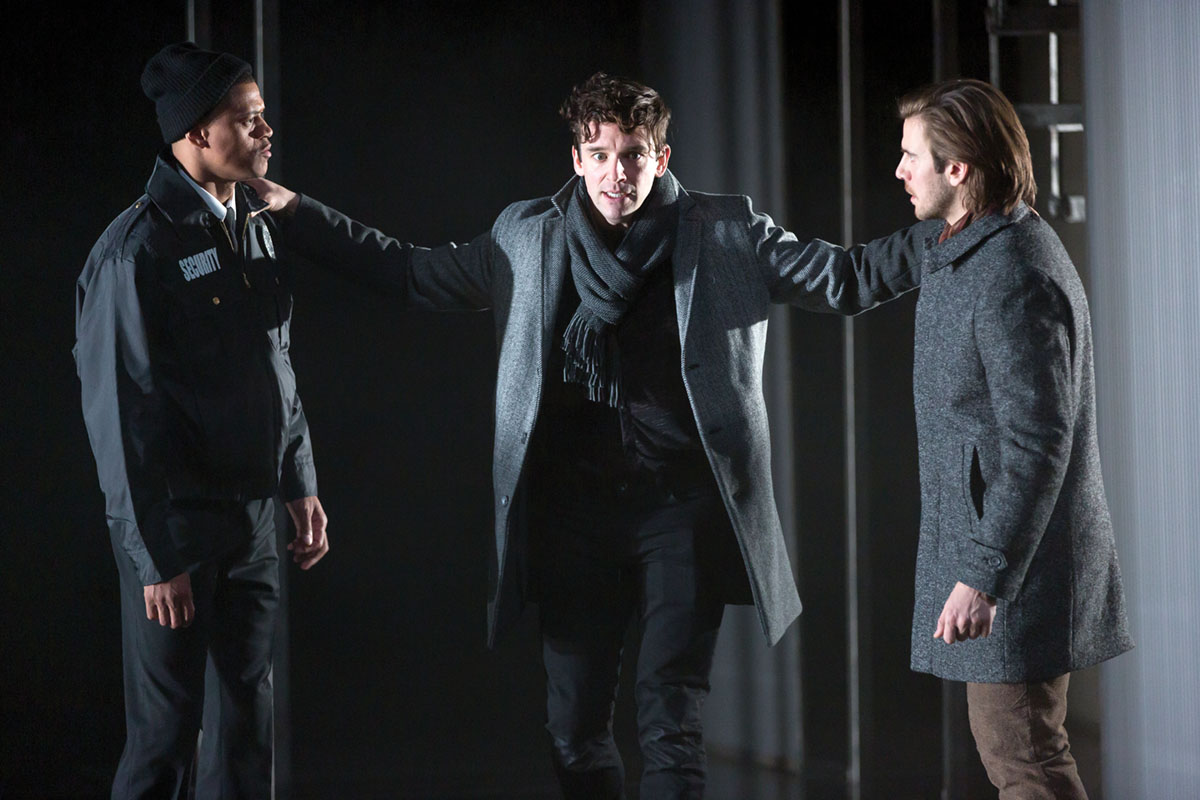 Eloquence personified, Michael Kahn’s Hamlet (★★★★★) speaks even before the play begins. Hanging over a darkly ominous stage is a titular marquee writ in vivid fluorescence. Bold, witty, coolly omniscient, it announces a starkly modern mood. But it also throws down a silent gauntlet. Yes, this is that juggernaut Hamlet, that star vehicle, that play, that film, that everything we think of when we think Shakespeare. But tonight, Kahn seems to be saying, it will be something completely else.

And so it is. A deeply elegant vision, Kahn’s is a Danish court in corporate-chic, where the outside world is lost to endless, dimly-lit interiors cocooned in discrete security. It is the domain of a First Family whose lives are cleaved into public and private faces, supported in their every move by an army of near-invisible minions. Arriving into this oppressively calm and controlled space is a gorgeously agitated, deeply appealing Hamlet, talking to us at once like that close, acerbic friend who knows when it’s time to drop his guard. The bar is thus set, and between director Kahn and Michael Urie in the title role, this is Hamlet rendered with integrity, wit and enduring personality.

And integrity is not a given. For every famous monologue or quote that hails from this play, there are as many questions. Front and center is Hamlet’s reaction to the most profound news of his life. Still mired in terrible grief at the unexpected death of his father, the king — and shocked that his mother has immediately married the king’s brother — he discovers it was murder. Yet, incandescent with horror and outrage, and charged by his father’s ghost to seek revenge, he decides his best course is to put on “an antic disposition” as some kind of cover. It is, quite frankly, an odd move. If it allows him to mock, provoke and confuse the court, it also draws attention to himself when it would seemingly make more sense to move with stealth. It most certainly puts the kibosh on his nascent love affair with Ophelia, a last harbor of innocence and truth in his corrupted world.

Making sense of this choice is a big challenge, and Khan and Urie fill in the blanks with authentic answer. Here, Hamlet burns with a neurotic, post-adolescent energy, the kind that throws manic fuel on everything: joy, grief, anger, and uncertainty. Of course, the question of Hamlet’s age is another of the play’s semi-mysteries — could he really be thirty as suggested by the Gravedigger? But this aside, his is a high internal drama — fueled by immense intelligence and skewed by inexperience — and it spurs impulsive plans, obsessions with death, and gut-wrenching awakenings to the magnificence of existence. Put it all into the suffocating “cage” of the corrupt court and it very much works that Hamlet’s psychic agitation would turn inward in a rebellion of feigned madness.

But the prize here is that Urie doesn’t just bring the angst, he brings sheer likability. He may be tortured, but he is also funny, adorably flappable, entertainingly clever and ever vulnerable, even as he rails. He is an awkward young man full of charm, life, and ridiculous opinions, and you want him around. It’s original, it’s wonderful, and Urie, like much of the cast, is superb in his delivery of Shakespeare’s language. Precise, whip-fast and fully cognizant, it is music to the ears and soul. Could he tone down a few of the yells? Lose a few of the “Shakespearean” gestures? Die a tad more authentically? Sure. But this is quibbling.

Bringing an effectively fusty persistence and good humor to his Polonius, Robert Joy suggests well a man who has learned to navigate the politics of court life. Joy, like Urie, understands the language, and delivers it with such nuance and fluency, it is easy to forget it was written in another century. Capturing the corporate mood and the new king’s game-face — but also his sweaty, private regrets — is an effective Alan Cox as Claudius. Yet another player with complete command of his Shakespeare, Cox stands out for having the kind of American accent that somehow, miraculously, doesn’t argue with the language. And show-stoppingly wonderful in three key roles: The Ghost King, Player King and the Gravedigger, Keith Baxter brings a full spectrum — gravitas, magnificent feeling, and silly humor — with color and nuance. 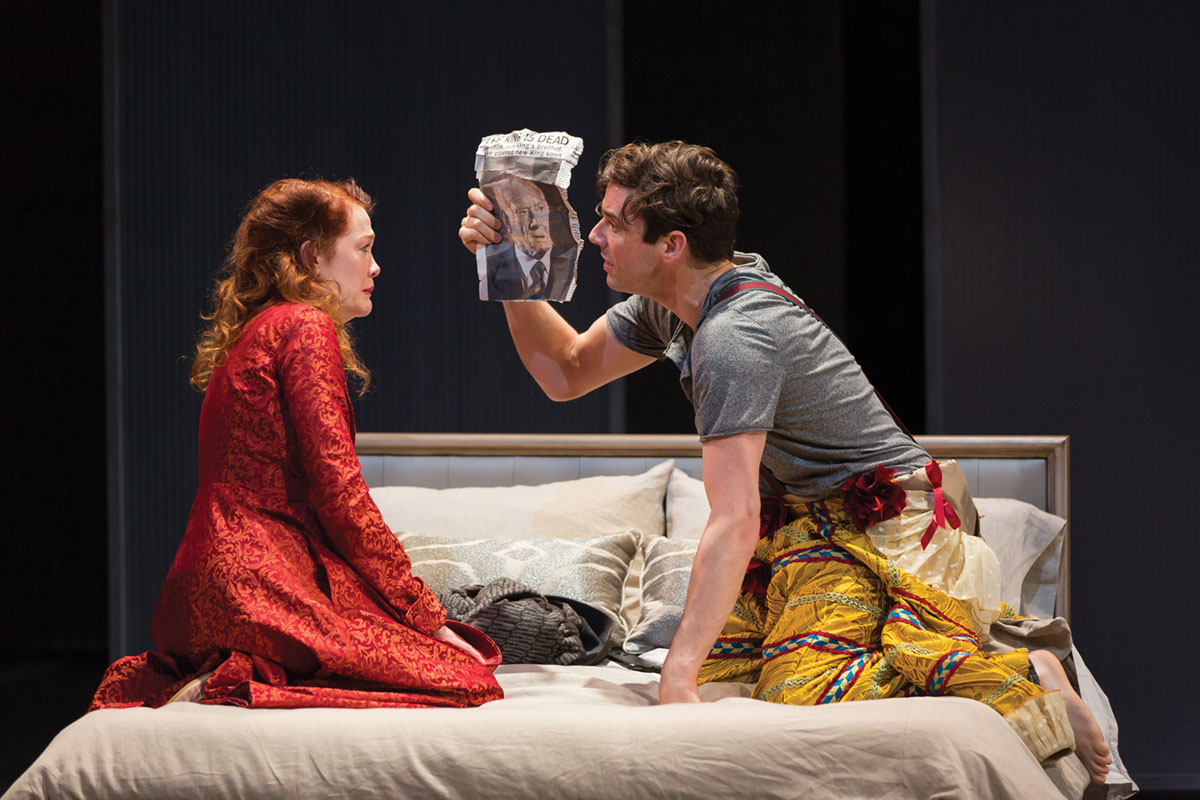 Less easy is Oyin Oladejo’s Ophelia. Although she commands her madness scene with much presence and pathos, she otherwise feels somewhat removed from the tone and mood here and has little chemistry with Hamlet. Her slapping at his legs when he pretends madness just doesn’t ring true. As Hamlet’s mother (and Claudius’ new queen) Gertrude, Madeleine Potter cuts a poised figure, but she doesn’t feel like the mother this Hamlet would have had until she finally hugs him after he accidentally kills Polonius. If it finally suggests that she has raised and been close to this young man, it comes too late. In the role of Laertes, son to Polonius and brother to Ophelia, Paul Cooper brings a credibly affronted countenance, but not quite the comfort with the language.

Finally, in a surprisingly small role, Gregory Wooddell, last seen blazing away as an STC lead, still manages to stand out as the buttoned-down Osric. And mention must be made of Chris Genebach (as Barnardo and Lucianus), who is looking ready for his close-up, and Avery Glymph (as Fortinbras and Marcellus), who brings a remarkable self-possession.

But to dwell too much on these thoughts would be to miss on the fabulous whole. With a phenomenally compelling leading man and the deep creativity and intelligence of Kahn’s vision, this Hamlet is truly “the thing.”

Boys in the Bard: An interview with Hamlet’s Michael Urie & Ryan Spahn

← Previous Story Review: Jefferson’s Garden at Ford’s Theatre
Next Story → “No Word in Guyanese for Me” finds new timeliness in the era of #MeToo and Trump