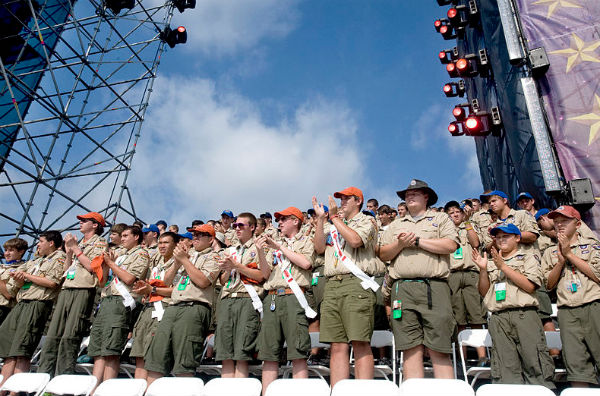 Allegations have arisen that an employee of a historic hardware store in Virginia used an anti-gay slur while refusing to help a Scout.

The incident is said to have happened on Friday at Nichols Hardware in Purcellville. A customer, Carlyn Hamilton, told the Washington Post that a boy in a Scout uniform walked in with his father, asking for help with his service project. The employee responded with “absolutely not.”

“’There is no such thing as the Boy Scouts anymore,’” the employee allegedly said. Hamilton said the boy froze, causing the employee to continue his rant. “He was like: ‘Did you hear me? We don’t support your organization. You allow in gays.’”

The employee then gestured to the door and told him to leave. After they had left, the employee said to Hamilton: “You know they let homos in, right?”

“And he said, ‘We do not support homos around here, I can tell you that,’” Hamilton said, adding, “It broke my heart.”

Hamilton posted her experience on Facebook, and many of those who commented said they would no longer support the hardware store.

The Washington Post contacted a manager at the store who said the allegations were “hearsay,” but also said he would talk to the employee on Monday.

Scouting has become more inclusive of gay people in the last few years. In 2013, the organization voted to lift a ban on gay youth and then later lifted a ban on gay adult leaders. This change led to the Mormon Church deciding to end its century-long partnership with the Scouts.

Last March, the Boy Scouts decided to change their name to “Scouts BSA” and welcome girls into the program, becoming inclusive to all genders as well.

“As we enter a new era for our organization, it is important that all youth can see themselves in Scouting in every way possible,” Boy Scouts of America chief executive Michael Surbaugh said in a statement. “That is why it is important that the name for our Scouting program for older youth remain consistent with the single name approach used for the Cub Scouts.”