Camelot is an intriguing, well-acted philosophical drama inflamed by lust and betrayal. (Pity about those songs, though.)

Formidable craft and intent have been applied in Shakespeare Theatre’s production of Camelot (★★★½) to present a version of Lerner and Loewe’s classic musical that connects with modern audiences. For director Alan Paul and his spellbinding cast, the effort pays off with an intriguing, convincingly acted philosophical drama inflamed by lust and betrayal.

The production squarely locates the weight of its thrust behind King Arthur’s quixotic pursuit of a peaceful, united kingdom ruled not by the sword but by civil law. As the idealistic Arthur, Ken Clark firmly captures the king’s labor to become a worthy monarch. His Arthur strives to be a principled leader — imagine that — but he’s no saint.

Clark’s layered portrayal reveals the learning involved for Arthur, both from mentors like the wizard Merlyn (Ted Van Griethuysen) and from his own mistakes. However, according to Merlyn, whatever Arthur learns, he’s fated to make the mistake of trusting his queen Guinevere (Alexandra Silber) and his most loyal knight Lancelot (Nick Fitzer).

Before Arthur and Guinevere are wed, the mere sight of her and pleasure of her company stir in him the desire to be a wiser and more just king. Upon being bested in battle by the knight Lancelot, he’s motivated to earn the right to lead such a champion.

Guenevere inspires Arthur to be a better king, Lance inspires him to be a better man. That the two should betray him together must feel like a devastating blow to the man and to the ideals of his kingdom — and it does. Paul’s perceptive staging of Jay Lerner’s deftly plotted book, based on the novel The Once and Future King by T.H. White, brings the rise and fall of Camelot into sharp relief.

Arthur holds court on scenic designer Walt Spangler’s austerely-appointed set of burnished wood and majestic scale. A towering wall serves as a backdrop for battlefields and an enchanted forest that’s dominated by the twisting, silvery branches of an ancient tree. Beneath that tree, a fading Merlyn teaches his young protégé, and in the tree’s branches, Arthur hides to steal a peek at his bride-to-be. It’s a striking and useful centerpiece.

The other centerpiece, the show’s score, is less impressive. Clark and Silber, both wonderful in expressing story and characterization through action and dialogue, do not take memorable command of the songs. He sings with heart, and offers a warm “How to Handle a Woman,” but his sound is rarely as lush as his wardrobe.

Among the three leads, Fitzer’s Lance is fuller of voice, and amusingly full of himself. He delivers a playful “C’est Moi” and an enticing “If Ever I Would Leave You,” and generally integrates his musical performance seamlessly with every other aspect of his characterization.

In a brief Act One scene, the nymph Nimue (Melissa Wimbush) contributes perhaps the most transporting musical performance of the evening in her siren call to Merlyn, “Follow Me.” Cherish the moment, as it’s the last to be heard of Nimue, or seen of Griethuysen’s sprightly wizard, until the final curtain.

The second act brings at least one other musical treat in the arrival of Patrick Vaill’s dastardly, and delightful, Mordred. His rousing “Fie with Goodness” preaches villainy with verve. Mordred adds a perfectly hissable spark that enlivens the production’s second half, as the sexual and emotional tension of the romantic triangle gives way to the suspense hanging over Camelot’s inevitable implosion.

Both the character and Vaill’s performance serve the production well. Mordred embodies a crafty political foil for Arthur, and drives home the tragedy that befalls this dreamer of a king determined to drag his nation out of the Dark Ages and into the light of reason and civility. Arthur chooses compassion over anger, unity over jealousy, and believes in the audacity of hope. He doesn’t succeed, but the dream survives. 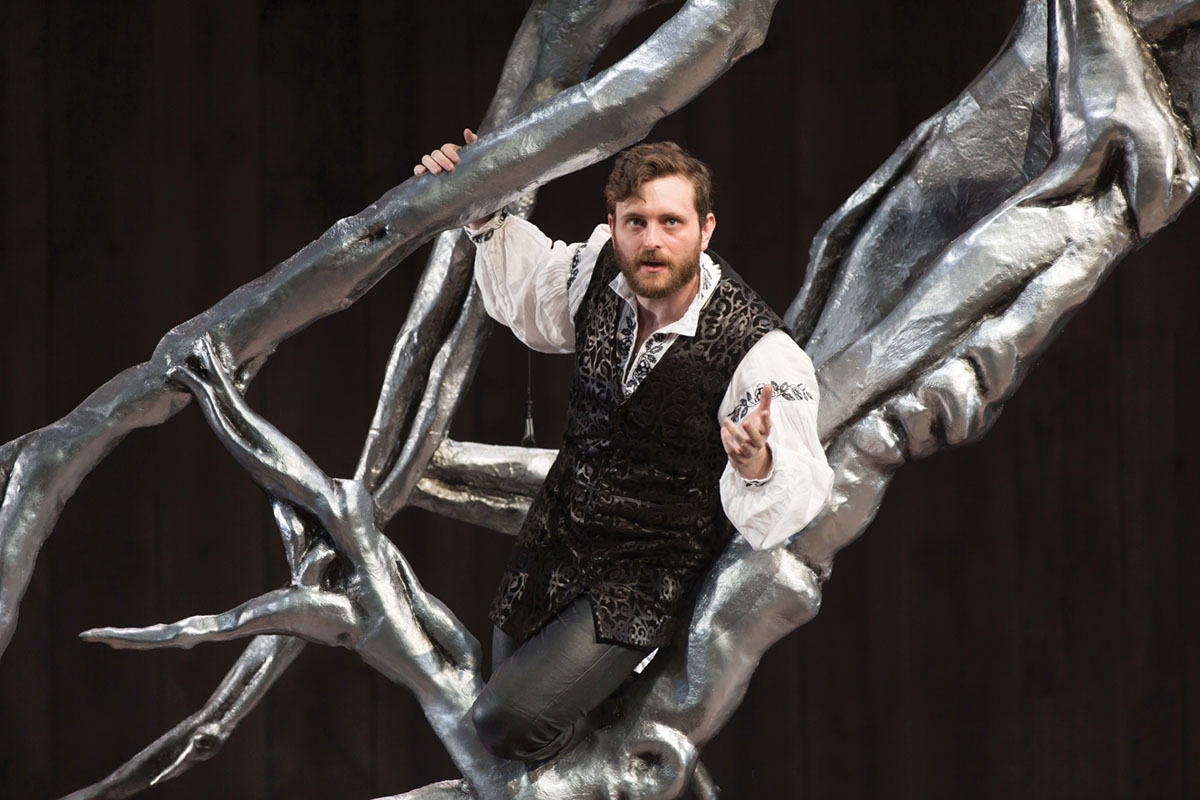