First the good news. For fans of George Bernard Shaw, seeing Saint Joan (★★★) performed live in the intimate surrounds of the Folger Theatre is sure to be an exciting prospect. What better way to savor his contemplation of the rise and then shocking fall of the Maid of Orleans, or to consider his enduring comments on church versus state, nationalism, zealotry, gender roles and even sanity.

And if the play is talky, the events simply sketched, this Bedlam production brings an engaging, immersive energy, innovative for its fun and informality. Indeed, it suggests the lively vibe of a dramatic reading more than the fully-staged performance, and it feels fresh and loved, as if the ensemble couldn’t be happier in sharing what they have discovered. That counts for a lot.

But for anyone not mad for Shaw, at more than three hours there is a point at which even good intentions are not quite enough. It is not just the sitting for long periods in the Folger’s enthusiastic aircon, it is the challenge of turning Shaw’s wordy, cerebral script, with its innumerable characters and pontifications, into something compelling and cathartic.

The problem here begins with the tiny cast, who must by necessity take on multiple roles. With just four actors (one of whom stays as Joan), there is a near-constant flipping in and around of characters (at least until the final act). Director Eric Tucker, the visionary behind last season’s phenomenal Sense and Sensibility, choreographs it boldly for tongue-in-cheek bravado — and it is often mildly entertaining — but the comic sensibility is too varied among the players. Some are subtle, others are not. Everyone seems to be operating more or less in their own bubble of what constitutes funny, which thwarts cohesion. And showcasing such chops comes with another price — what is crafty, isn’t always convincing. After a fashion, it all begins to feel rather too much like an endless party trick.

Larding the play with humor causes another side effect: if the fun helps mitigate Shaw’s often dry and expository-laden language, it also distracts and argues against the (already diffuse) preparations for pathos. Although this Joan brings the near-final scene into some emotional focus, one’s innermost thermostat has been too-long set at “light-hearted” and it is too late to re-calibrate to “tragic.” It’s not that humor can’t travel with tragedy — of course it can — it’s just that it doesn’t work here, perhaps because too much of it has been grafted.

The final challenge is the play’s length. If there is honor in accuracy, there is mercy in adaptation. Put another way, anything coming in at operatic length must deliver: there must be something deeply beautiful, enduringly funny, powerfully insightful or gut-wrenchingly tragic in the offing. Anything less should be edited into the realm of human tolerance. As interesting, amusing and skillfully-executed as this Joan may be — and with all due respect to Shaw — there simply isn’t the heft, and the evening rapidly becomes a marathon (even with breaks). Indeed, some of the greatest pathos here must be for the handful of audience members who find themselves seated on stage. Talk about a captive audience.

All this said, the ensemble couldn’t be more committed and they are no doubt more aware than anyone of the hurdles in bringing this to life. For sheer earnest endeavor, Dria Brown as Joan deserves accolade. This is a tough gig: Joan is at once innocent, certain, zealous, charming, and then strangely movable in her final moments. Shaw does annoyingly little to explain her other than to proclaim that she isn’t crazy. But even if, with 21st-century eyes, it’s hard not to see her as delusional, Brown makes her highly likeable, delivering her large, sparkling and “in the moment.” If she fails to blend fully with the other moods in play, it is due to the varying sensibilities that never quite coalesce.

The other standout here is Tucker in his various roles, trying hard for some Cleese-like humor and then doing a tremendous impression of an English aristo in his Warwick. Each works in itself, even if he functions somewhat in a vacuum, often playing more to the audience than the other characters. Offering an intriguingly complicated charisma, Sam Massaro is nicely versatile in his roles (save for an English accent that could curdle milk) and somehow commands a room and a monologue with zero pretension. Finally, Edmund Lewis is the crowd-pleaser here with some less-than-subtle stock humor, but he finds some genuine emotion in the final act.

In the grand scheme, it’s hard not to admire Tucker’s skill in conceptualizing this Joan with such a drop-cloth kind of verve, (and such a small ensemble). That alone is reason to see it. Just bring some warm socks and the patience of a saint. 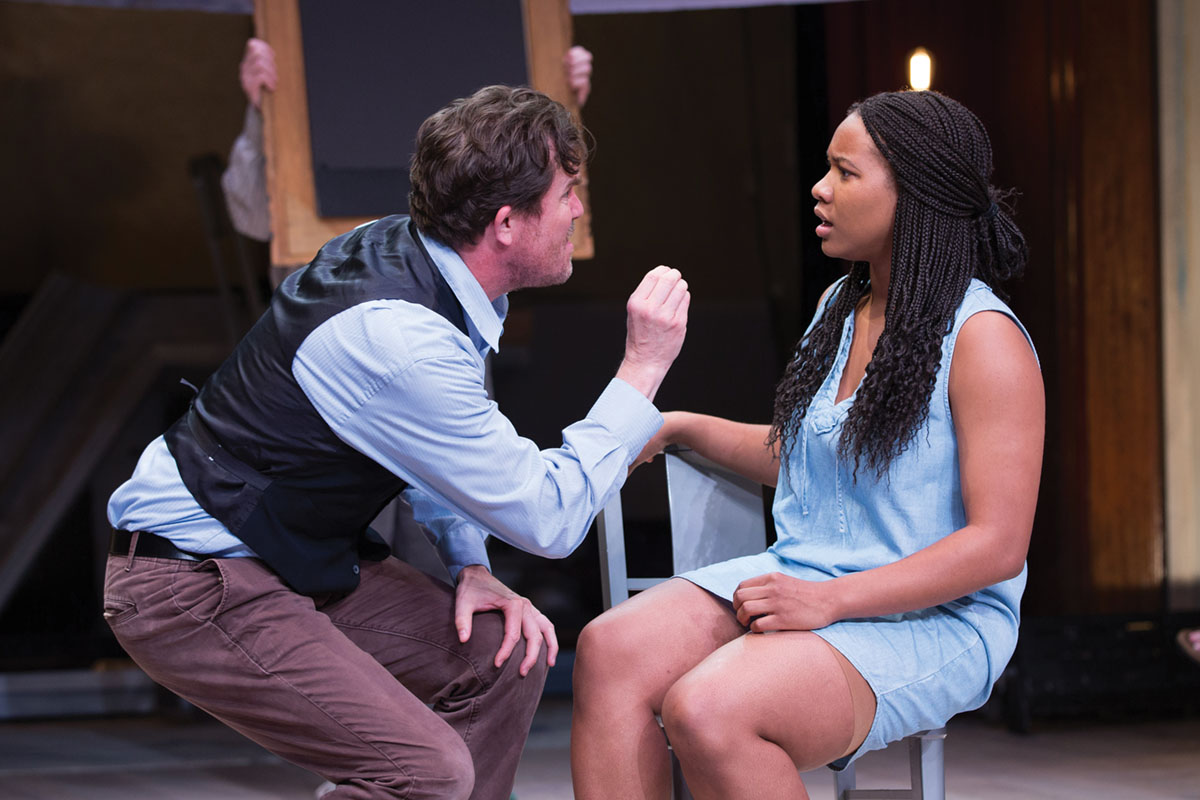