Stage Reviews: “Girlfriend” at Signature and “Vietgone” at Studio 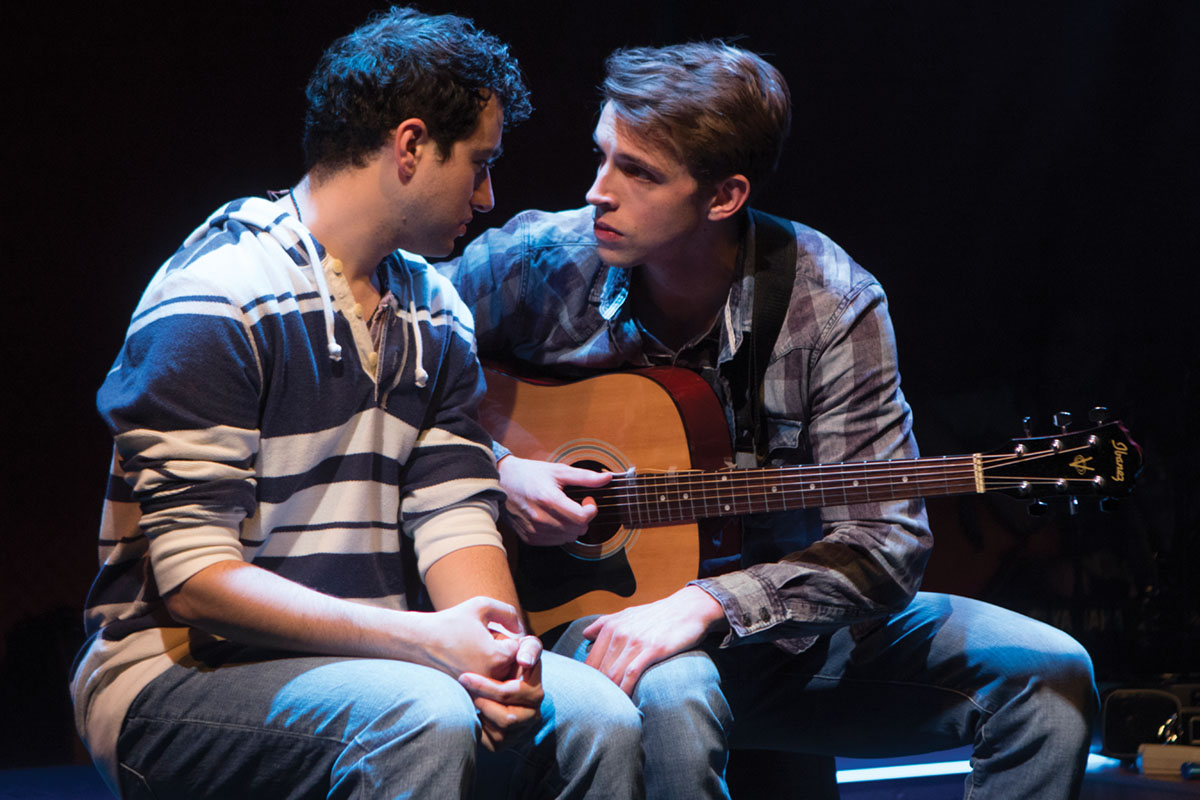 That forever-young feeling should taste many times sweeter for fans of ’90s pop-rock hero Matthew Sweet and his commercial breakthrough album Girlfriend, released in October 1991. The rocker’s set of post-breakup tunes serves as the soundtrack for the laid-back summer adventures of unlikely Nebraska high school pals Will (Jimmy Mavrikes) and Mike (Lukas James Miller).

It’s largely via Sweet’s songs that Mike and Will express their burgeoning feelings for each other, backed by a four-piece all-female band. For Signature’s production, director Matthew Gardiner has the musicians lined up behind scenic designer Misha Kachman’s stylish wall of glass, which backs the boys’ bedrooms. From there, the quartet watches like muses over sensitive jock Mike’s halting seduction of shy, clever Will.

Flirting and bantering through Todd Almond’s script, Mavrikes and Miller paint a charming portrait of innocence. A romance that should feel familiar to anyone who can recall the blush of first love — or maybe recently saw Love, Simon — still registers as new for Will and Mike. They’re perceptive in different ways, insecure in others, and both performers delineate sharply what’s drawing them closer now, during the final handful of weeks before Mike heads off to college in Lincoln.

For better and worse, Miller’s Mike sings less like a drama kid than like a high school athlete, which can be adorable, if not altogether aurally pleasing. His renditions of the songs could stand to be more persuasive, although Miller compensates somewhat with appealing self-confidence. And duetting with Mavrikes, who uniformly sounds great singing Sweet, the pair warms up to a sensational take on the title tune.

Mavrikes also keeps Miller on his toes with deft comic timing. Whereas Will could veer too far into puppy dog territory, Mavrikes ensures the youngster maintains his sardonic wit, even while he’s clearly smitten with self-described “handsome” dude Mike.

Girlfriend shares with the aforementioned Love, Simon, as well as Call Me By Your Name, a gentle touch and wisdom. Yes, this is all new to Will and Mike, but most in the audience will know that whatever pain these crazy kids feel now isn’t of the type that stings forever. So, roadblocks like a conservative dad, or obnoxious friends, might divert the couple’s path, but they won’t stand in the way of love.

It all goes down a little easily, in fact, and without the meaningful or complementary diversion of a side story. Mike and Will are the only show on stage, and the only characters in their world who truly are brought to life. Gardiner’s staging pinpoints the tiny sparks — knees grazing in the front seat of the car, an unexpected kiss — that can set hormones racing, but the story still plays out like an uncomplicated shot down a long, straight highway.

In a movie version, one of these guys at least would have a quirky best friend to add flavor to the mix. Instead, there’s the band (Britt Bonney, Beth Cannon, Nicole Saphos, Erika Johnson), smiling on Mike and Will’s improbable romance from behind glass, to add some suggestion of the guys’ community of peers.

They also add driving backbeats and harmonies for the love songs, filling out the show’s old-school atmosphere of late-night chats on a landline. Lighting designer Colin K. Bills’ multi-colored neon tubes line the set’s glass partition, warmly accentuating the twilight glow of Will and Mike’s trips, night after night, to catch the same action flick at the local drive-in.

Girlfriend quite assuredly captures the way, at that age, summer days and nights bleed into weeks that disappear into memory before anyone’s taken notice. Blink and you’ve missed it. Mavrikes and Miller clearly communicate that once-in-a-lifetime memory of first love. “You remind me of my girlfriend,” Mike tells Will. As heartfelt declarations go, that doesn’t have exactly the ring of “I love you,” but it makes for memorably awkward fledgling romance. 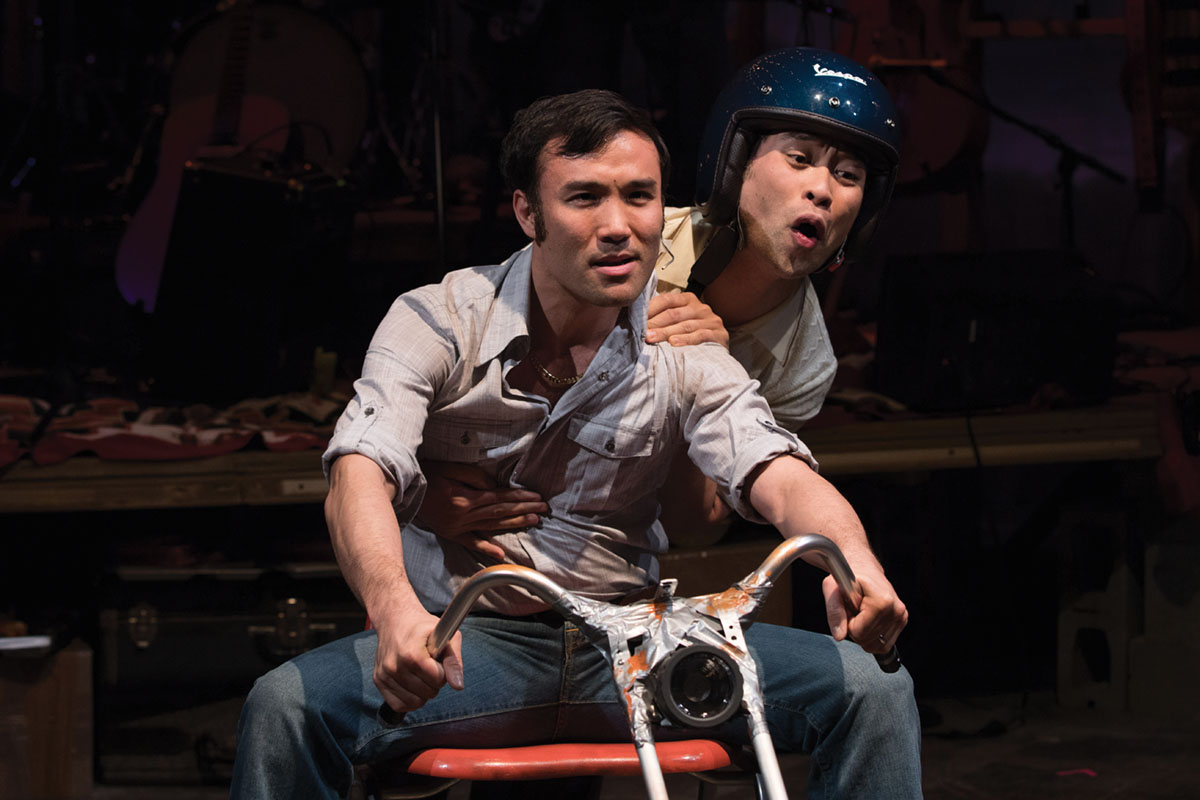 Studio Theatre’s production adds an original folk-punk-rock score, by Jeff Song, to Nguyen’s time-shifting take on the parallel postwar trajectories of Quang (Marc Delacruz) and Tong (Regina Aquino). The two refugees outlasted the Vietnam War to be airlifted out of Saigon and shipped to the U.S., where they first cross paths at a refugee camp in Arkansas.

They’ve both sacrificed tremendously to have this opportunity to reset their lives. Quang and his buddy Nhan (Joe Ngo) maintain an optimistic outlook, but they’ve no idea what the future holds for them in America. First, they’ll have to wrest control of their destinies back from their savior Uncle Sam.

Tong, a self-proclaimed bitch, is not as buoyantly hopeful, but she’s no less determined to manage her own life, war be damned, and in spite of a mother, Huong (Eileen Rivera), who’s always putting her down. Navigating dire, extraordinary circumstances, Quang, Tong, Nhan, and Huong bare raw, relatable emotion and sensuality that is superbly channeled through the characters’ groovy ’70s rock songs.

Backed by a live band — the Vietgoners (Song, Jonathan Hawkins, Keith Butler, Jr. and Andy Santospago) — the cast belts out a varied score of Seger-style odes to Mary Jane, and classic rock that captures the immigrants’ fascination with the vast land of the free. Joined by Jacob Yeh in the role of playwright Nguyen, the ensemble essays a host of characters, from U.S. soldiers to pot-smoking swingers.

Traveling cross-country by motorcycle, Quang and Nhan are introduced to burritos (“fat spring rolls”), hippies, and grass. Tte immigrants also experience their share of culture shock and prejudice. Nguyen applies an equal-opportunity offender bite to the play’s satirical view of Murican-style nationalism, often delivered with an aw-shucks cheer. And Power ensures that the history, and commentary on U.S. intervention in Vietnam, feel folded organically into the courtship of a pair of mutually appealing survivors.

The production transitions smoothly between broadly comic family squabbles, Quang and Nhan’s trek from one refugee camp to another, and assorted bursts of stress, rage, and frustration that come pouring out through song. Aquino’s interpretations of Tong’s songs feel, in general, a little tight or unnatural, but when Tong storms the stage for a punk-rock plea, the performer really lets loose with a fierceness.

Delacruz projects a commanding presence throughout as army pilot Quang, attacking the role with a sure-footed versatility whether romancing Tong, or rocking out. He’s well-matched by Ngo, as Quang’s best buddy Nhan (and other roles). The two share a great comic rapport, and also knock their heavier dramatic scenes out of the park. Yet neither the performances nor the production are weighed down by the seriousness of the subject matter.

The cast makes excellent, occasionally hilarious use of props to mark their journeys from a Saigon hut, to a Huey helicopter, the open road, or Tong’s busy bunk at Fort Chaffee. The script’s frank sexuality is one of its best qualities, as is the creative approach to representing the characters’ varying proficiency speaking English.

Power even throws in a movie-style, choreographed “montage” of Quang and Tong’s blossoming romance that should be a kick for film fans, a laugh for everybody else, and it effectively advances the story.

Elegantly weaving past, even earlier past, present, then 40 years later into a moving narrative that represents both an intimate family history, and a broad view of a country and culture upended, Vietgone makes the complex look easy. And it does it all with a warmth and rebellious garage rock attitude that will leave audiences, like Quang’s bro Nhan, laughing through tears.