Capital Pride weekend drew thousands of revelers seeking, above all else, acceptance and a sense of belonging 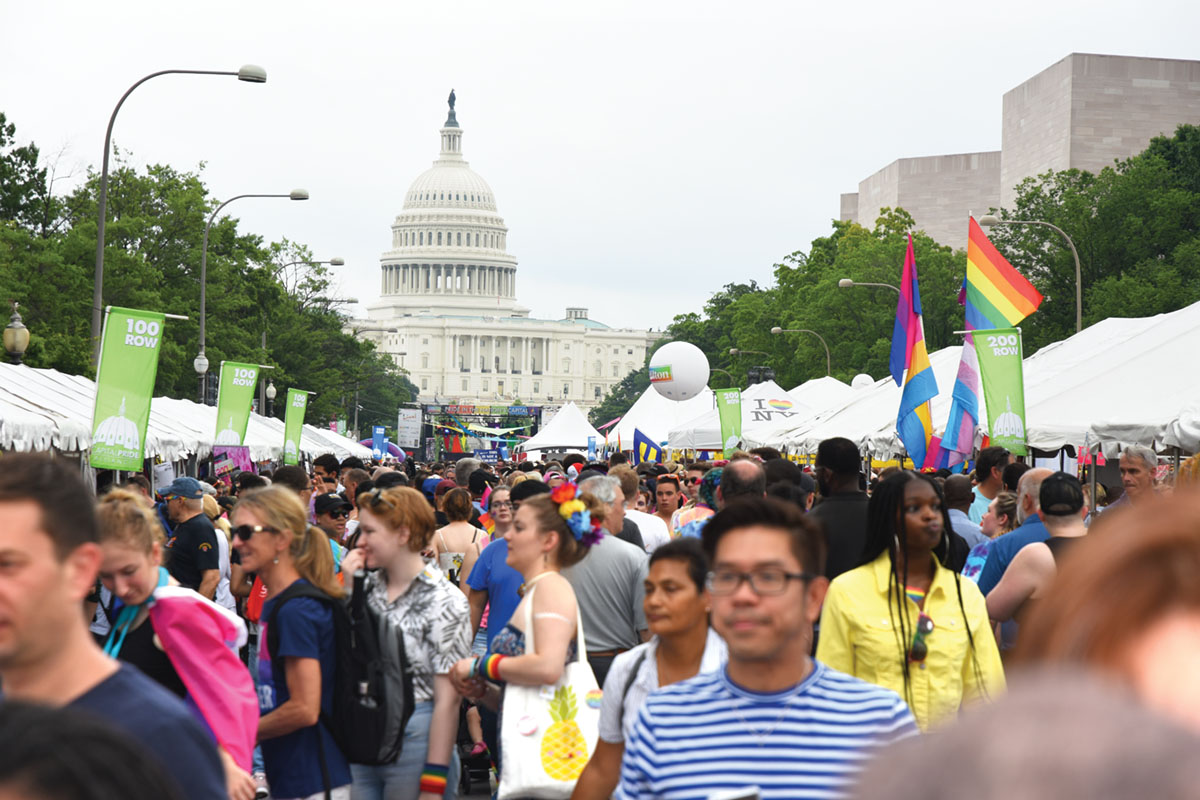 In the days and hours leading up to the Capital Pride Parade, people around the region were frantically checking weather apps to see if a predicted massive rainstorm was on a collision course with Washington. Just before the parade kicked off, the sky darkened and the wind picked up, prompting people to reach for their umbrellas and scrounge through their knapsacks for ponchos.

But the rain never came. Instead, bathed in unexpected late afternoon sunlight, the annual parade went on as scheduled, traveling slowly and deliberately, from its starting point at 22nd and P, and weaving a four-hour path through Dupont Circle and Logan before concluding at 14th and R Streets.

Thousands lined the streets to cheer each marching contingent, shouting with delight as multi-colored bead necklaces, candy, and condoms were thrown into the crowds. Onlookers surged forward forward, some even jumping the barriers to offer marchers high-fives and hugs.

For Joe Tresh, a 48-year-old photographer who has photographed Prides in various cities over the past two decades, it’s that closeness and community spirit that sets Capital Pride apart. “What I’ve noticed over the past couple of years is that in larger cities, especially New York, Pride is something that’s locked down, where the crowd is pushed back 50 feet from the parade,” said Tresh. “But I like the way D.C. feels cozy. It still feels local. We’re a large city, there’s a lot going on. It feels like we know the people in the parade. Every time I go, I see my entire D.C. gay family.”

The parade offered up dozens of elaborately decorated floats representing various entities, from corporate giants Marriott International, Capital One, and Booz Allen Hamilton, to local businesses, like Vida, Nellie’s, and City Paws, to community organizations and sports teams, like Whitman-Walker Health, La Clinica del Pueblo, and the Stanley Cup Champion Washington Capitals. The politicians were out in force, including parade mainstay Congresswoman Eleanor Holmes Norton, Mayor Muriel Bowser, and City Councilpersons Jack Evans and Phil Mendelson. Churches, all proclaiming unity and acceptance, showed up in a greater abundance than in prior years, perhaps a sign of the times with a show of love trumping hate.

“Pride is exciting,” said Tresh. “I think a lot of people my age get cynical or bored. But I always get excited about new people exploring themselves and exploring the community. It just makes me feel great to see all the joy that’s part of that experience.”

For Timothy Crom, a 30-year-old student who moved to Greenville, N.C., from Washington just six months ago, Pride — and the ability to celebrate one’s identity openly — is something that D.C. area locals take for granted.

“I’m in the South, so the gay community is completely different,” he said. “It’s very closeted, not very open. There’s only really one gay bar, and it’s a restaurant that does gay nights on Fridays and Saturdays. It’s not very inclusive. [Being gay] is kind of looked down upon, because people are very religious.” Crom misses the more accepting atmosphere of D.C. in general, and wanted to attend Capital Pride because of the feeling of togetherness it fosters.

“I like the inclusion, the moments, the feels you get when everyone’s out, celebrating uniqueness and individuality,” he said. “I like the festival and the concert. Everyone’s singing along to the music. It feels how Pride should feel, like everyone’s here for the same purpose.”

At Sunday’s festival, many organizations had set up games to catch people’s attention. D.C.’s Different Drummers had visitors spin a “Wheel of Fortune” where they could earn various candy prizes, including bags of M&M’s or Tootsie Rolls. The Washington Mystics women’s basketball team had two toy basketball rims where visitors could take their chance at free-throw shooting.

In a brilliant addition to the festival, a separate area was designated to local recreational sports organizations. Team DC had a dunk tank where people tried to douse their favorite local athletes. The D.C. flag football team held a mock mini-scrimmage where they tossed around a ball in the midst of a bustling crowd. The DC Strokes rowing club pulled volunteers from the crowd to try out a rowing machine to simulate the experience of rowing on the Potomac River. Interactivity was rampant — there were waterslides for the kids, a “bouncy” battling arena, and even, at the far side, a mechanical bull ride.

All day long, music emanated from The Capitol Stage, situated at the intersection of 3rd and Pennsylvania, the Capitol dome serving as a majestic backdrop. The day’s performers included the Gay Men’s Chorus, the drag doyennes of Town and Ziegfeld’s, including a resplendent Ella Fitzgerald, an intensely spangled MAX, Keri Hilson, Kim Petras, Asia O’Hara, and a magnificent concert-capping performance from Alessia Cara, whose joyous performance ignited the already celebrity-dazzled crowd.

But no performer, perhaps, owned the day as much as Troye Sivan, who gave one of the most sincerely felt, fully energized performances in the history of Pride. The Australian-born singer, who has just released a new single, “Bloom,” and whose infinitely catchy “My! My! My!” is still hot on the charts, is openly gay. He clearly connected deeply and meaningfully with the audience, driving them into an absolutely frenzy when he left the safety of the stage and bodysurfed the front rows. Held aloft by his fans, the look of rapture on Sivan’s face conveyed his feelings for the fans with whom he shared a communal thread.

“It was insane,” Sivan told Metro Weekly following the performance. “To be in D.C. celebrating Pride with everyone, I just feel such a sense of community and such love from the crowd — I couldn’t be happier to be here.”

Marli Washington, the CEO of gc2b, a company that provides chest binders primarily for trans males, had a line of nearly 50 people snaking around their company’s booth. Washington, who identifies as non-binary, delighted in the fact that many people were expressing interest in the company’s products, which were marked down for the festival. Washington also took the opportunity to bask in what was their very first Pride experience.

“Pride is a safe space for me and others in the community. I feel like the more I become myself, the more pride I feel throughout the year. This is definitely a space where if you’re feeling constrained or restricted in your daily life, you can come here and be yourself, and no one’s going to judge.”

Austin C., a pansexual student from the University of Maryland at College Park, also enjoyed her first Pride. She wore a pansexual pride flag draped over her shoulders. “Aside from my parents, this is my first ‘coming out’ experience,” she said. “Everyone’s super nice and accepting, no one’s judging, so you don’t have to worry about prejudice…. It’s like a big party celebrating who we are and who we want to be.”

For Anna Donelson, a 25-year-old Virginian studying to be a horse dentist, Pride provided exactly the kind of judgment-free environment she was looking for — one where she could express herself freely.

“Pride is just loving people,” said Donelson, wearing a pink and blue tie-dye T-shirt and sporting hair dyed pink, purple, green, and blue to simulate a “mermaid” look. “Everyone’s so nice. You get to be yourself. You get to be eccentric. It doesn’t matter how you look.

“It definitely has all kinds of people here. It’s not just one particular type of person. So come with friends or by yourself. Smile, be friendly, and you’ll be accepted.”

Bailey Vogt contributed to this report.