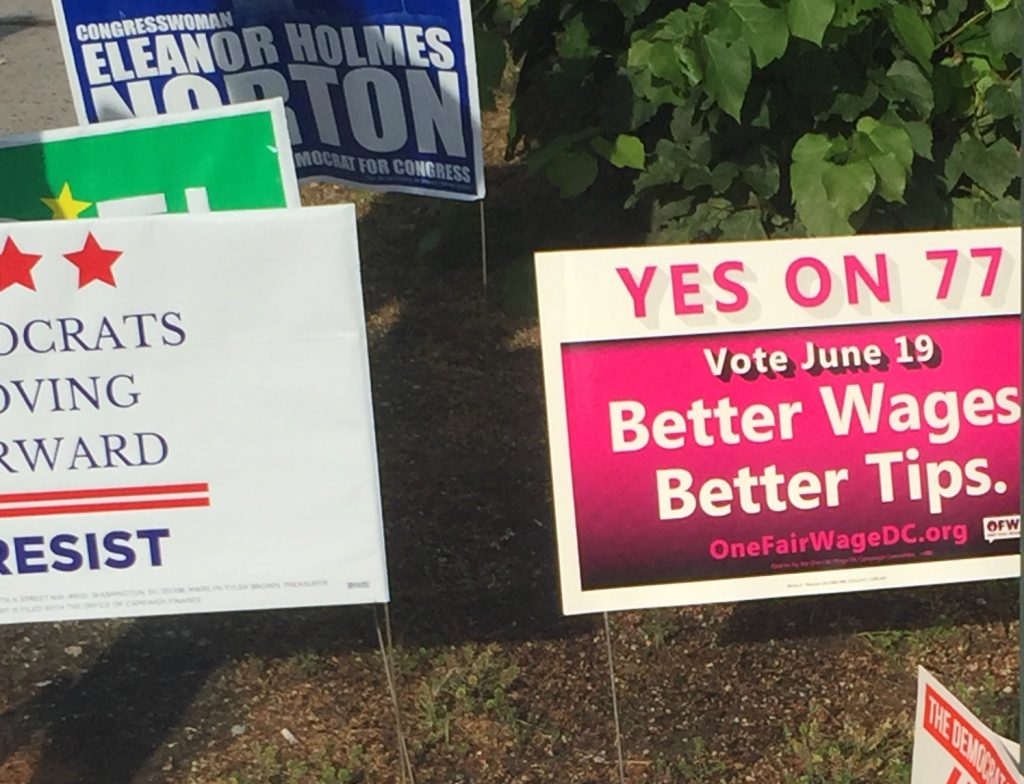 Voters in the District of Columbia have approved Initiative 77, a ballot measure that raises the hourly pay of tipped employees to $12.50 an hour, with the intent of reaching $15 an hour by 2026.

Under the previous two-tier wage system, non-tipped minimum wage employees earned $12.50 an hour, a level that will gradually be increased to $15 an hour by 2020. But tipped employees, like servers and bartenders, earned $3.33 an hour and supplemented the rest of their income with tips.

Many employees, particularly those working in profitable restaurants or bars, opposed the change over fears that it would lead customers to tip less or not tip at all, thus resulting in a significant reduction in take-home pay. But proponents of the measure pointed to other states that have eliminated the “tip credit,” whereby tips make up the gap between servers’ hourly wage and the minimum wage, claiming that tipping has not decreased in those areas.

About 84,519, or 17%, of the District’s 479,000 registered voters cast ballots in the primary, which saw Mayor Muriel Bowser and every single councilmember re-elected with little opposition.

Pre-primary polling on behalf of pro-77 forces had indicated that 64% of voters were supportive of Initiative 77. The National Restaurant Association also did its own polling — the results of which were never publicly released, but were leaked to The Intercept —  which found that about seven out of 10 Americans approve of raising the minimum wage for tipped workers, even if it means having to pay more for meals.

Reached prior to the tabulation of results, Diana Ramirez, deputy co-director of the D.C. chapter of Restaurant Opportunities Center United, part of the One Fair Wage coalition that pushed Initiative 77 onto the ballot, noted that she and several pro-77 canvassers had experienced harassment or suffered verbal abuse at the hands of opponents, including three separate incidents at polls today.

“There’s a real fear. I’m not discounting that,” she said of the increase in hostility towards pro-77 campaigners in the final days leading up to the election. “It’s fear because we know that employers are having meetings with their workers, telling them this is going to hurt them. It’s fear of the unknown. Yes, this is a dramatic change in the structure of people’s business transactions, and the model for a lot of owners.

“I would just encourage people not to lead with fear, but to be hopeful that there is a better way, that people can make better wages and better tips,” Ramirez said. “We don’t have to agree with each other on how to get there. But as long as you let fear take over your life, no one’s going to get anywhere.”

Speaking at a victory party held by the One Fair Wage DC coalition at the Brookland Busboys and Poets, Ramirez declared victory, saying: “The workers have spoken. They want better wages and better tips!”

“This is a huge victory for tipped workers,” Ramirez said in her speech. “We are finally going to be able to budget, not work shift to shift, week to week, we’re going to know how much we’re going to get paid at the end of the week, and tips are on top. That’s economic freedom.”

The initiative now faces a potential roadblock in the form of the D.C. Council. Ten of the current 13 councilmembers came out in opposition to the measure. The Council could let the results stand, tinker with some of the details of the initiative, or overturn it altogether. According to polling cited by the One Fair Wage campaign, 82% of District voters say they would be “concerned” if the Council overruled the voters and reversed Initiative 77.

Ramirez said that supporters of the initiative will hold a rally outside the Wilson Building on Wednesday morning at 10 a.m. to apply pressure to the Council and urge them not to overturn the law.

But the Restaurant Association Metropolitan Washington, which was part of the “No2DC77” coalition, released a statement saying that the organization does not see the vote as the final word in the debate, and vowing to lobby D.C. councilmembers to overturn the vote.

“Initiative 77 was today approved by a majority of the meager number of registered voters who came out to vote,” Kathy Hollinger, president and CEO of RAMW, said in the statement.

“We cannot accept as final a vote in a primary election, in the middle of the summer, on a ballot measure, the language of which was, at best, misleading. Unaffiliated voters, Republicans, and even many Democrats had little reason to participate in the process, which is why turnout was historically low, and fewer than 10 of the District’s more than 100,000 non-Democratic voters bothered to vote.

“The issue of how people are to be fairly paid in the hospitality industry is a complicated one, not easily explained by campaign signs, slogans, and buttons,” Hollinger added. “What is telling, however, is that tipped workers, the very workers who would supposedly be helped by the passage of Initiative 77, overwhelmingly opposed the measure.

“We ask tipped workers, Restaurant Workers of America, Save Our Tips, and No2DC77 to join with us in continuing this fight as we immediately begin discussions with District elected officials,” she concluded. “All of us, not an out of town interest group, know what is best for workers, businesses, and the residents of the District of Columbia, and we shall continue to make our case with those who have ultimate responsibility for the District’s laws.”

John Riley is the local news reporter for Metro Weekly. He can be reached at jriley@metroweekly.com
← Previous Story Fight over Initiative 77 remains passionate, but cordial, as voters cast ballots
Next Story → Transgender woman says she was kicked out of DC’s Cuba Libre for using women’s restroom