Concert Review: Beyonce and Jay-Z’s On the Run II Tour

Jay-Z and Beyoncé’s On the Run II packs a potent one-two punch, but doesn’t deliver the knockout. 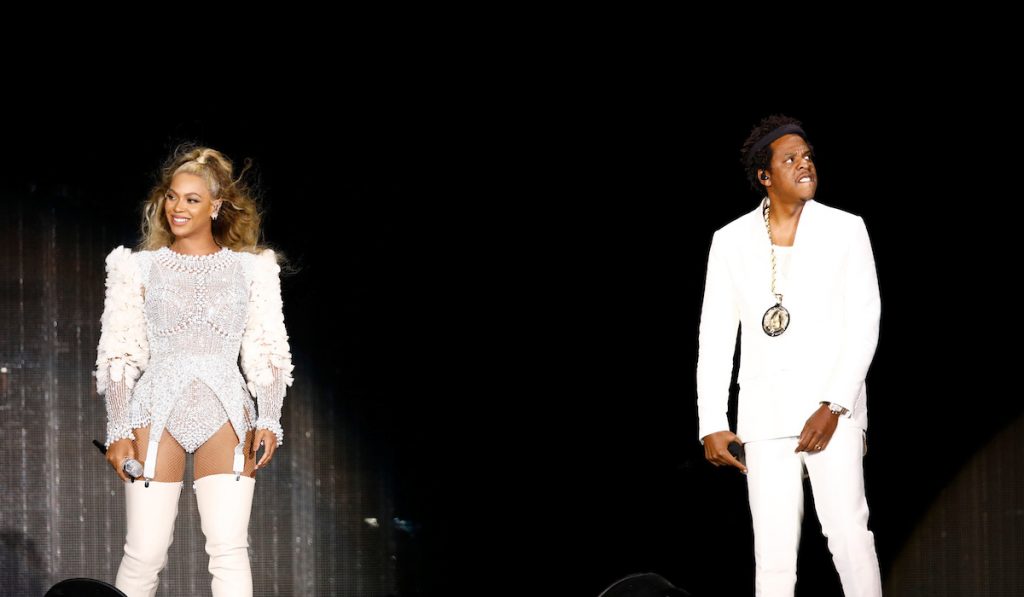 Beyonce and Jay-Z perform on the ‘On The Run II’ tour at Fedex Field on July 27, 2018 – Photo: Raven Varona/Parkwood/PictureGroup

Jay-Z and Beyoncé’s On the Run II tour (★★★), which landed on Friday night at FedEx Field, is a Mr. and Mrs. affair primed to show off the power of two, rather than the transcendent talent of one or the other. The energy never flags and the confidence never wavers with the couple tag-teaming the stage, duetting and soloing through two decades of hit hip-hop and R&B.

The tandem works almost too well, however, with both Hov and Queen Bey short-changed by having to cede the stage so often just as they’re getting hot. It’s akin to having someone switch channels on you, to a show just as riveting, then switching it back before either program totally pays off. Luckily, both channels of OTRII are set to party, and the pace is nonstop with the Carters, who entered for night one of their FedEx stop resplendent in white, hand-in-hand, projecting pop royalty oneness.

The show of solidarity kicked off with husband and wife duetting on Jay’s “Holy Grail,” a number they also performed on their last co-headlining tour. The rapper won a Grammy for the song’s original recording with Justin Timberlake, but it’s always made more sense to have Beyoncé by Jay’s side singing lyrics like, “You’d steal the food right out my mouth, and I’d watch you eat/And I still don’t know why I love you so much.”

For two performers whose stage m.o.’s differ so significantly, Jay and Bey share the stage with a natural rapport. Their pose, onstage and in the Lovers in Paradise video scenes splayed across the giant HD screens, is as the Gangster and the Queen, parts they play to brilliant complementary effect.

The Brooklyn mogul changes suits and bandanas like his wife changes floor-sweeping couture gowns, and yet he still flowed with raw finesse through thumping crowd-shakers “On to the Next One” and “Fuckwithmeyouknowigotit.”

From there, the handoff was seamless to Bey and her dancers hitting “***Flawless” and “Feeling Myself.” Mrs. Carter, sounding full of voice, but sticking mostly to the staccato of her phrasing, boasted swagger of her own. She served up charged gospel soul with her B’Day track “Resentment,” then took over the house in full during a later run of dance-heavy hits, starting with “Baby Boy” and peaking with her Lemonade anthem “Sorry.” 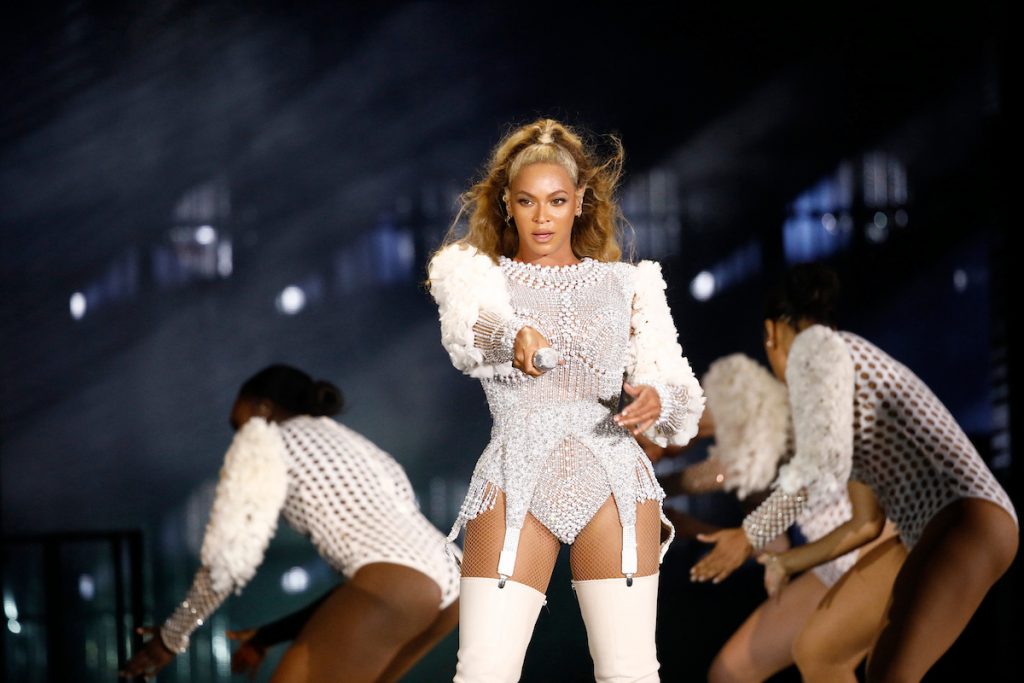 Beyonce in the ‘On The Run II’ tour at FedEx Field on July 27, 2018 – Photo: Raven Varona/Parkwood/PictureGroup

Somewhat hemmed in by the two-hander structure, Beyoncé doesn’t really have the space in this show to unleash anything like the religious experience the world witnessed at her Coachella appearance. Of course, that mega-production can’t travel all across the U.S. and Europe.

Beyoncé shone brightest in her solo element. Backed by horn players, singers, and a band arranged high atop LED-lit scaffolding, teamed with a tight troupe of dancers on a platform that moved back-and-forth over the crowd, she turned “Mi Gente,” “Formation,” and “Run the World (Girls)” into a sing-along, dance-along fiesta for thousands.

Still, the singer beamed happiest performing with her husband. Jay, too, looked like he was having the time of his life running through their chart-toppers “Déjà Vu” and “Crazy in Love.” The multi-millionaire married couple appeared at times blissful, and for one moment like any other couple when, just as Bey hit a lovely patch of the chorus on Jay’s “Young Forever,” her husband interrupted to shout a behest to raise the lights. 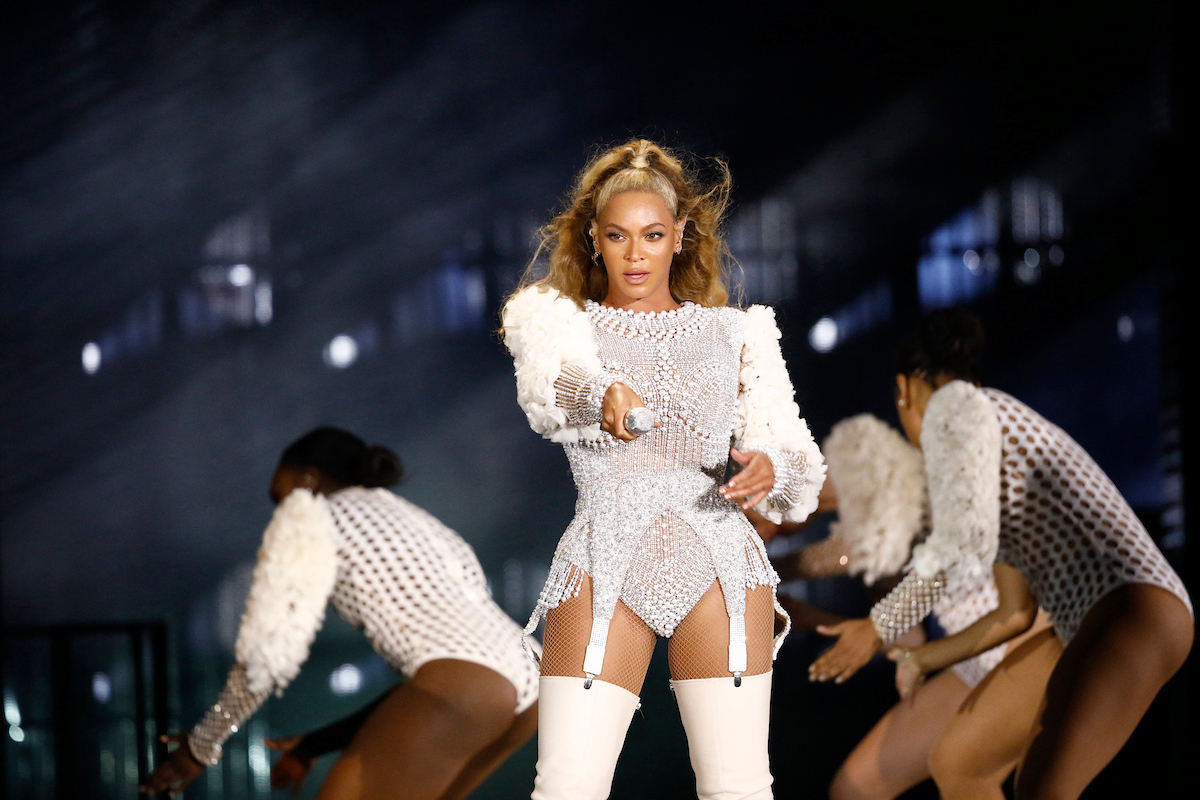 André Hereford covers arts and entertainment for Metro Weekly. He can be reached at ahereford@metroweekly.com. Follow him on Twitter at @here4andre.
← Previous Story David Byrne’s American Utopia Tour is 2018’s most thrilling concert experience
Next Story → Tom Goss returns to D.C. for a one-night only concert