By John Riley on August 9, 2018 @JohnAndresRiley 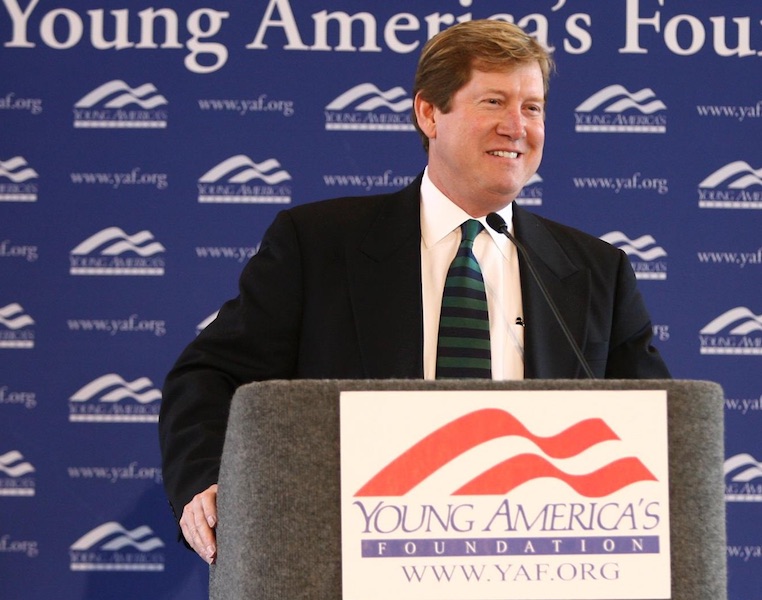 A Minnesota Republican congressman has come under fire for past anti-LGBTQ comments he made that were brought to light earlier this week by BuzzFeed News.

The news outlet reported on comments that U.S. Rep. Jason Lewis, who represents Minnesota’s 2nd Congressional District, made when he was a radio host.

In a clip from the Jason Lewis Show from 2013, which was unearthed by the Democratic opposition research firm American Bridge, Lewis defended bans on same-sex marriage, comparing such bans to criminal laws that penalize rapists and speeding drivers.

Lewis said a court ruling that legalized marriage equality based on the Equal Protection Clause “would undo the entire state criminal code because we’re all treated unequally.”

“Speeders, when you’re flying down the highway 10 miles an hour over the speed limit, next time a cop pulls you over, say, ‘I’m going to file a Supreme Court challenge to this ticket,'” Lewis said. “‘I am being treated unequally. The guy next to me is not getting a ticket but I am just because I’m a speeder. The law has a disparate impact on speeders.’

Lewis also argued that if same-sex marriage was legalized, then there was no reason not to permit polygamy.

He has also maintained that LGBTQ activists were “shredding the Constitution” by pushing for equal rights, and that same-sex parents “could harm the kid.”

The backlash against Lewis’ homophobic comments comes just one month after CNN uncovered and reported on a series of statements the congressman made that were interpreted as hostile towards women. The LGBTQ advocacy group GLAAD has since pointed to several other anti-LGBTQ comments that Lewis has made over the years.

For instance, during a candidate debate in April 2016, Lewis stated that allowing transgender students to use the restroom or locker facility matching their gender identity was an “abomination.”

“…[W]hat happens when you allow this consolidation of power in St. Paul or Washington, even worse, is you start to get these experimental schemes with our children,” he said. “Now the latest is allowing transgendered students to use the rest room or locker facility of their choice. That is an abomination that no school district should adopt.”

Lewis, a longtime friend of former Congresswoman Michele Bachmann, who gave the introduction at the launch of her failed presidential campaign, also characterized pro-equality court rulings as “breathtaking activism,” and “fanciful,” justifying the same-sex marriage bans that were being challenged by LGBTQ activists by saying “the law by definition discriminates — against smokers, drug users, loan sharks.”

He also decried pro-equality rulings that struck down bans on marriage as a violation of the 10th Amendment to the U.S. Constitution and an infringement of state’s rights. Incidentally, since he’s been elected to Congress, Lewis has shied away from social issues, saying he believes that issues like marriage and abortion should be left up to individual states to decide.

Lewis has also campaigned on support for laws that give exemptions to people with certain religious beliefs, such as those who oppose same-sex marriage.

“When an Oregon baker or a New Mexico photographer is fined for declining to participate in an event that conflicts with their religion, our First Amendment rights to conscience are at risk,” reads a statement posted on the “Issues” section of his campaign website.

GLAAD President and CEO Sarah Kate Ellis used the information her organization had dug up on Lewis to highlight his animus for members of the LGBTQ community.

“LGBTQ people, and especially transgender people, have been under attack by the Trump Administration on a nearly weekly basis since he took office. Those attacks — accompanied by dangerous rhetoric like that of Representative Lewis — leaves the LGBTQ community in harm’s way like we haven’t seen in recent history,” Ellis said in a statement. “In this climate, it is vital that the media report on the anti-LGBTQ records of both incumbent politicians and those seeking elected office.”

In November, Lewis will face off against Angie Craig, an out lesbian businesswoman who previously challenged him two years ago. Lewis prevailed by two points in a district that was won by President Trump by a similar margin. Current political prognosticators, including the Cook Political Report, currently rate the district as one of several Republican-held “tossup” districts that Democrats will need to win to take control of the House of Representatives.

John Riley is the local news reporter for Metro Weekly. He can be reached at jriley@metroweekly.com
← Previous Story Study: 78,000 transgender Americans could be prevented from voting in 2018
Next Story → AG Jeff Sessions says gay-hating Alliance Defending Freedom is not a “hate group”