Theater Review: The Color Purple at the Kennedy Center 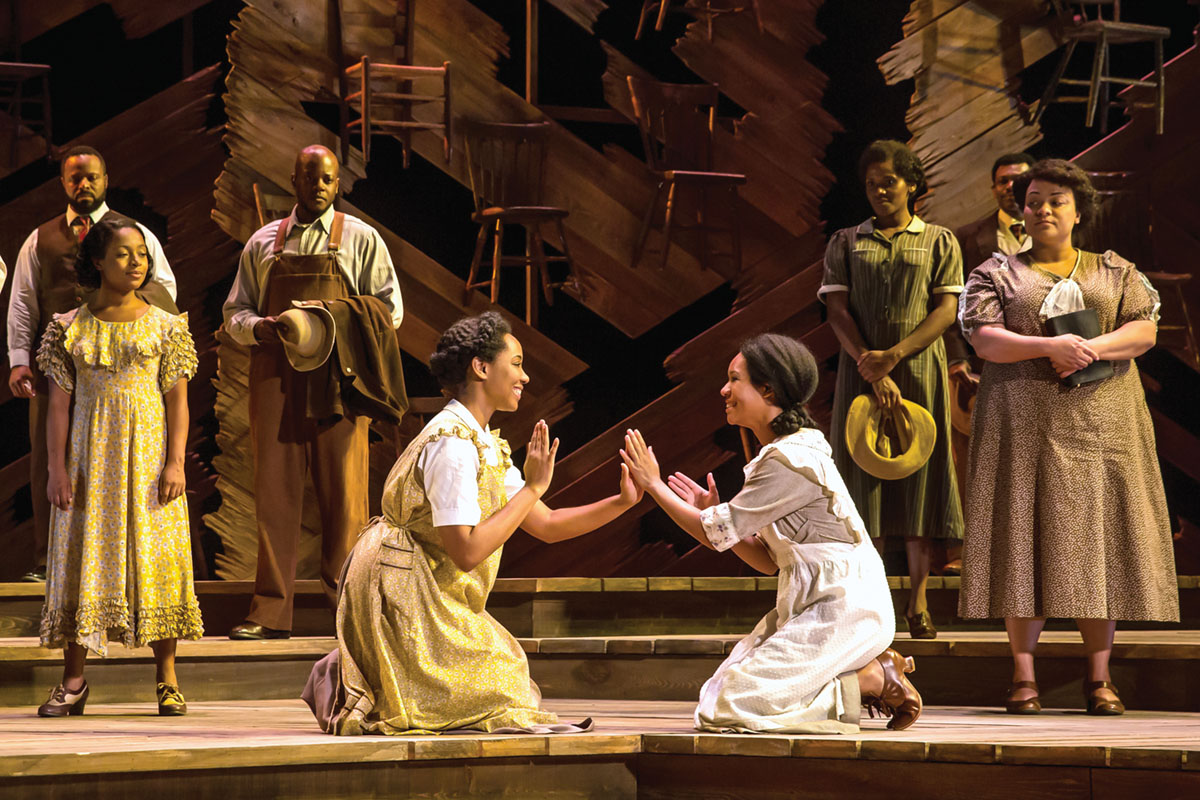 Time hasn’t dimmed the brilliance or urgency of Alice Walker’s The Color Purple. The Pulitzer Prize-winning novel’s tale of Miss Celie — raised to believe she will never amount to anything because she’s poor, black, a woman, and ugly — now feels as of-the-moment as it might have felt when the novel originally was published in 1982, or when Steven Spielberg gave the story a glossy film treatment a few years later.

In the era of #MeToo and “Nevertheless, she persisted,” Celie’s voice, and the voices of those women beside her, should be heard among the chorus — after all, they helped give birth to that chorus. That legacy resonates throughout the musical The Color Purple (★★★), which streamlines Celie’s early 20th-century saga of triumph over misogyny and abuse into a set of rousing songs with music and lyrics by Brenda Russell, Allee Willis and Stephen Bray.

Streamlined though the story may be, director John Doyle’s production at the Kennedy Center, a touring version of his Tony-winning 2015 revival, still feels slack in tempo. Occasionally it’s the musical arrangements, but more often it’s the staging that ticks along mechanically, as actors hit poses and formations that don’t flow with a grace to match the singing.

The libretto, by Pulitzer Prize-winner Marsha Norman (‘night, Mother), loses much of the epistolary storytelling of both the novel and 1985 film, and consequently downplays the vital role that literacy played in Walker’s drama about poor black folks in the Jim Crow South. But Norman’s script still hits the highlights that have endured in the hearts of millions, leaving Celie, Nettie, Sofia, Shug, Harpo, and even Mister plenty to sing about over the show’s eventful four-decade span.

Many of those highlights are inextricably linked to Spielberg’s movie, and to the indelible performances of Whoopi Goldberg as Celie and Oprah Winfrey as Sofia, the stout, iron-willed wife of Celie’s son-in-law, Harpo. So much of the movie belongs to Sofia, whose parallel journey of sweet survival helps pave the road for Celie’s liberation.

It’s testament to the character, and to Winfrey’s performance, that the memorable scene of Sofia thrashing through a field towards Celie to chew her out for advising Harpo to beat her has, in the musical, been spun into the powerful rebuke “Hell No!” The number provides one of several opportunities for this production’s Sofia, Carrie Compere, to wrest the entire show in her grasp with her galvanizing performance. Her hip-shaking Sofia is a warm, radiant light that nevertheless persists, despite suffering the brutal blows of racism and incarceration. Compere’s turn makes it easy to see how being in the midst of this full-bodied force of nature might inspire Celie to figure out a way to stand up for herself.

As Celie, Adrianna Hicks starts out perhaps too far along in the character’s arc from cowed to courageous, yet she does capture the woman’s awakening to a sense of her own power. Celie’s second-act growth is conveyed best in song via Hicks’ sass and the band’s swing during “Miss Celie’s Pants.”

The cast gets to deliver one great song after the other, including “Too Beautiful for Words,” a Stevie Wonder-style ode to Celie’s charms, sung by Carla R. Stewart as Shug Avery. The worldly chanteuse Shug shows Celie how to love herself, body and soul. However, while Norman’s script plays out the women’s companionship as more than mere sisterhood, Stewart’s and Hicks’ rapport only faintly generates the electricity of romance. 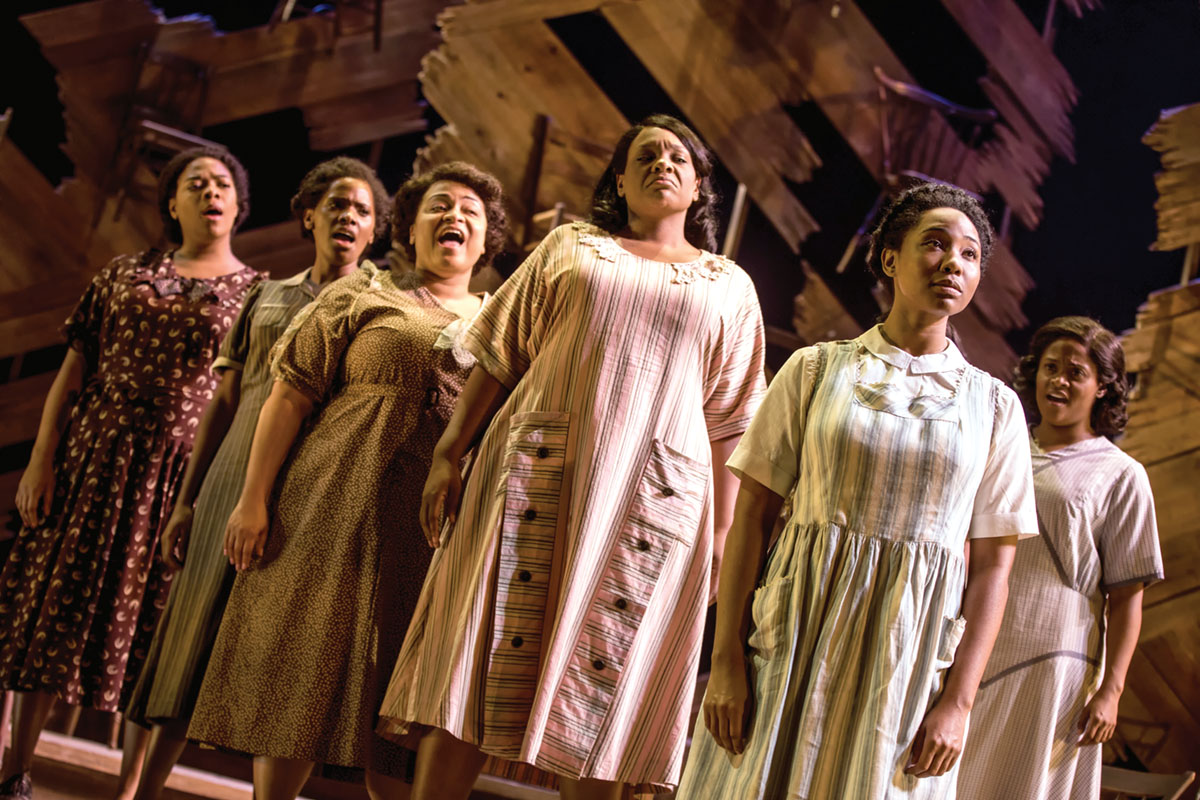 But that pair registers a more compelling bond than the weak connection between Hicks and N’Jamah Camara as Celie’s sister, Nettie. The sisters’ separation and hoped-for reunion drives a great deal of the action and should trigger a depth of emotion that just isn’t stirred by Camara’s nicely sung Nettie. The men in the story, including Gavin Gregory as Celie’s brow-beating husband Mister, likewise recede in this rendering, although C.E. Smith makes a solid impression in his brief turn as Celie’s crank of a father-in-law, Ol’ Mister.

Shug drives more of the action here, and, attired in Ann Hould-Ward’s vibrant costumes, Stewart ensures that she stands out as a woman unlike any other. The wardrobe helps sell Shug’s sexy, Celie’s evolution, and every step of the period, from 1909 to 1949, with a smart, subtle touch. On the other hand, John Doyle’s sets — tall sheets of plywood, stacked with stiff-backed chairs — don’t add much vibrancy to the sluggish staging. As Celie might say, “Thank god, I’m here.”

It’s the cherished characters and the heartrending story, as potent now as 30 years ago, that make this theatrical trip back in time worthwhile — along with a sheaf of gospel, blues, and jazz-infused tunes that give moving expression to Walker’s sweeping epic.

The Color Purple at The Kennedy Center

André Hereford covers arts and entertainment for Metro Weekly. He can be reached at ahereford@metroweekly.com. Follow him on Twitter at @here4andre.
← Previous Story Stage Review: Dave at Arena Stage
Next Story → Stage Review: Constellation Theatre’s “Melancholy Play: A Contemporary Farce”