By John Riley on September 4, 2018 @JohnAndresRiley 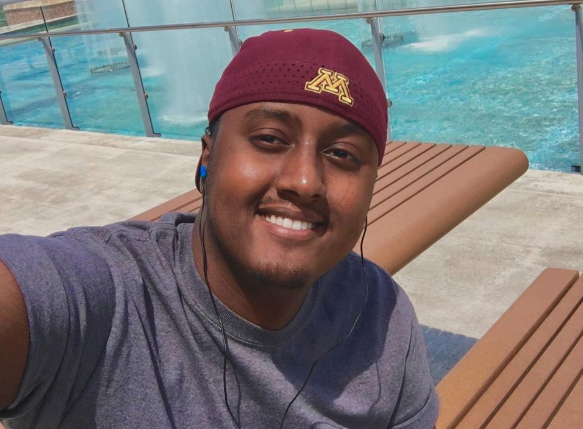 An Ithaca College student who escaped conversion therapy in Kenya has been awarded a $10,000 grant for his bravery and advocacy on behalf of the LGBTQ community.

Mahad Olad, a columnist for the student-run news website The Ithican, was awarded with a Youth Courage Prize by the Colin Higgins Foundation after writing an article describing his escape in February 2018, reports The Ithacan.

Olad comes from a conservative Muslim Somali family who fled their native country for Kenya to escape the Somali civil war. When he went to Ithaca College to pursue his bachelor’s degree, he began writing for The Ithacan, the college’s student-run news website.

In the course of his writings, he came out as gay and admitted he was no longer a practicing Muslim. Those articles eventually got back to his family, but his parents never confronted him about it, instead proposing to go on a family vacation to Kenya.

Once he arrived in Kenya, it became clear that Olad’s family intended to force him into a camp to “cure” him of his homosexuality.

“The very first night [in Kenya], my mother told me this would not be a summer vacation. She told me that I would not be returning to the U.S. at the end of the summer as planned,” Olad wrote. “She asked me to withdraw from college so that I could be placed under the control of a group of sheiks whose goal would be to reform my religious beliefs and reorient my sexuality.

“Similar to the practice of gay conversion therapy in the United States, there are those within the Muslim community who utilize abusive tactics as a way of policing what they consider to be ‘deviant’ behavior. Even though my mother ‘asked’ me to go, I knew that it wasn’t really a choice,” Olad continued. “A few sheiks were at our hotel that night. They briefly spoke to me about how being gay and atheist is unequivocally against my Islamic upbringing and African heritage. I knew that when they came back to get me the following morning, I would be forced to go with them.

“I was quite aware of the horrors of these gay and religious conversion camps. The leaders operate the camps around grim parts of Somalia and Kenya. They subject their captives to severe beatings, shackling, food deprivation and other cruel practices. It usually involves a rigorous Islamic curriculum. Those who fail to cooperate, make adequate progress or try to escape could possibly be killed.”

Olad fled the hotel, lying to his family about his plans, and contacted the Ex-Muslims of North America, a nonprofit organization dedicated to helping Muslims who choose to leave Islam. EXMNA, with the aid of the U.S. Embassy, helped him return to the United States.

In his article for the Ithacan, Olad noted that his family members — even those who weren’t involved in the plan to put him in conversion therapy — have since rejected and disassociated themselves from him.

“The loss of my family’s love and support, both financial and emotional, has been extremely traumatic,” he wrote.

Olad has since dedicated himself to fighting against the practice of conversion therapy — which he notes is still all too prevalent in America — with particular focus on stopping it in African nations, especially among Muslim communities.

“Unlike conversion therapy in the U.S., the religious conversion camps in Africa aren’t commonly reported on or talked about; they operate in secrecy,” he writes. “We don’t have exact numbers of how many young people are forced to go to these camps, but we know the numbers are growing.

“I am lucky enough to be over eighteen, a U.S. citizen and to have a large support network — all of which made it easier for me to get out of Kenya. Not everyone is so lucky, however,” Olad adds. “That is why I’m sharing my story: so the U.S. and other governments can do more to protect the vulnerable youth of Muslim backgrounds whose parents abuse them in the name of religion and culture.”

Olad said he will use the bulk of his award to pay for college, but plans to set aside some of his prize money to create a visual media project dedicated to capturing the lives and experiences of LGBTQ Africans.

In addition to the $10,000 grant, the Colin Higgins Foundation prize comes an all-expenses paid trip to attend the National LGBTQ Task Force’s 2019 “Creating Change” conference, which will be held in Detroit in January.

The Colin Higgins Foundation praised Olad and his fellow awardees in a press release.

“On those days when the future of our country looks bleak, we only have to look to these young people who inspire us with a renewed commitment to protect our communities and do good in the world,” James Rogers, board president of the Colin Higgins Foundation, said. “The courage we see in each one of them Colin Higgins would have been extremely proud to support.”