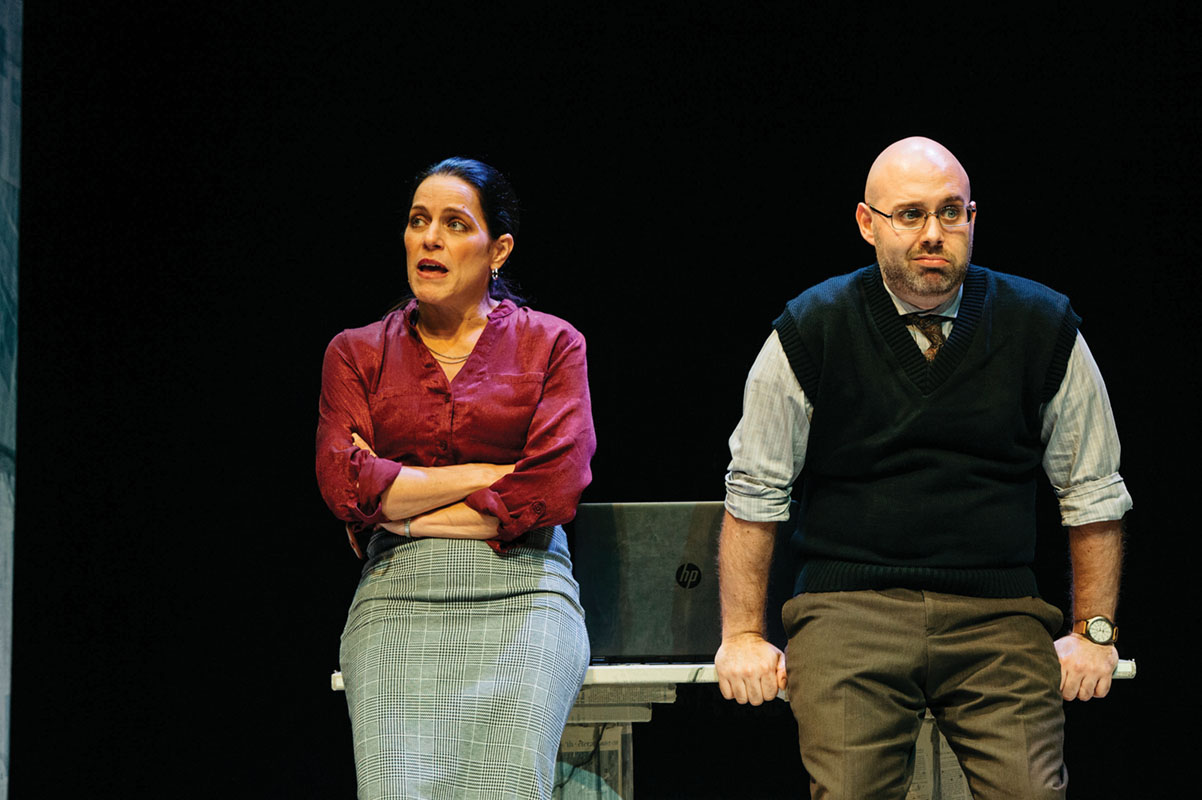 John Strand’s comedy Lincolnesque boasts a premise straight out of a Frank Capra film, or, in the more contemporary parlance of the play, a screwball series from USA Network: a stressed D.C. speechwriter recycles phrases from Abe Lincoln’s greatest hits in order to save the flailing campaign of his congressman boss. Add a love interest (in this case, the congressman’s ferocious new chief of staff) and a comic complication (the writer sources those Lincoln quotes from his mad-as-a-hatter brother who actually believes he is the 16th president), and the show is good to go.

For Keegan’s new staging of Lincolnesque (★★), which the company gave its D.C. area premiere in 2009, the premise is fully charged with current midterm election meaning. But while the pieces are set, it’s the production that flails. Caught between darkly satirizing the self-serving shenanigans of the hamsters on the wheel on Capitol Hill, and portraying the emotionally fraught relationship of the speechwriter Leo (Michael Innocenti) and his mentally unstable brother Francis (Brandon McCoy), director Colin Smith lands the production somewhere in the muddy middle.

The comedy hits peaks of laughter in its jabs at politicos, and the sibling drama uncovers poignant truths about caring for someone who’s mentally ill, but at the center of it all stands a performance by McCoy that doesn’t hold it all together. His Francis, who speaks in Lincoln-esque tones and renders the self-diagnosis that he’s “a house divided against itself,” comports himself with the formality of a presidential impressionist. The tricky multi-layered turn of essaying both the troubled man Francis actually is and the revered historical figure he thinks he is falls short of convincing.

Tasked with communicating the wisdom and import of some of Lincoln’s most powerful rhetoric, McCoy’s a technically precise orator who nevertheless leaves Francis sounding like a madman reciting Lincoln, as opposed to living Lincoln. According to the story, Francis’ dementia might or might not be an act, but for the most part, McCoy’s Civil War president should live and breathe. Instead, it feels like a put-on. Leo has arranged his life, and partly his identity, around taking care of Francis, so the character is ill-served by a Francis who appears not psychotic but merely uncooperative.

On the other hand, Stan Shulman as Edwin, one of the burnouts Francis pals around with in the park, offers a quite moving portrayal of a man who’s lost his marbles. The script refers to D.C. as a place where people lose their “backbone, their brains, or their balls,” and Edwin, whom Francis/Lincoln calls his Secretary of War, is the play’s most pitiful example of a former idealist driven mad by the moral rot he either promoted or witnessed in his prior life. Shulman also makes Edwin funny, and imbues him with heart, in stark contrast to his turn in another role as an affably ruthless political operative named Harold Daly. 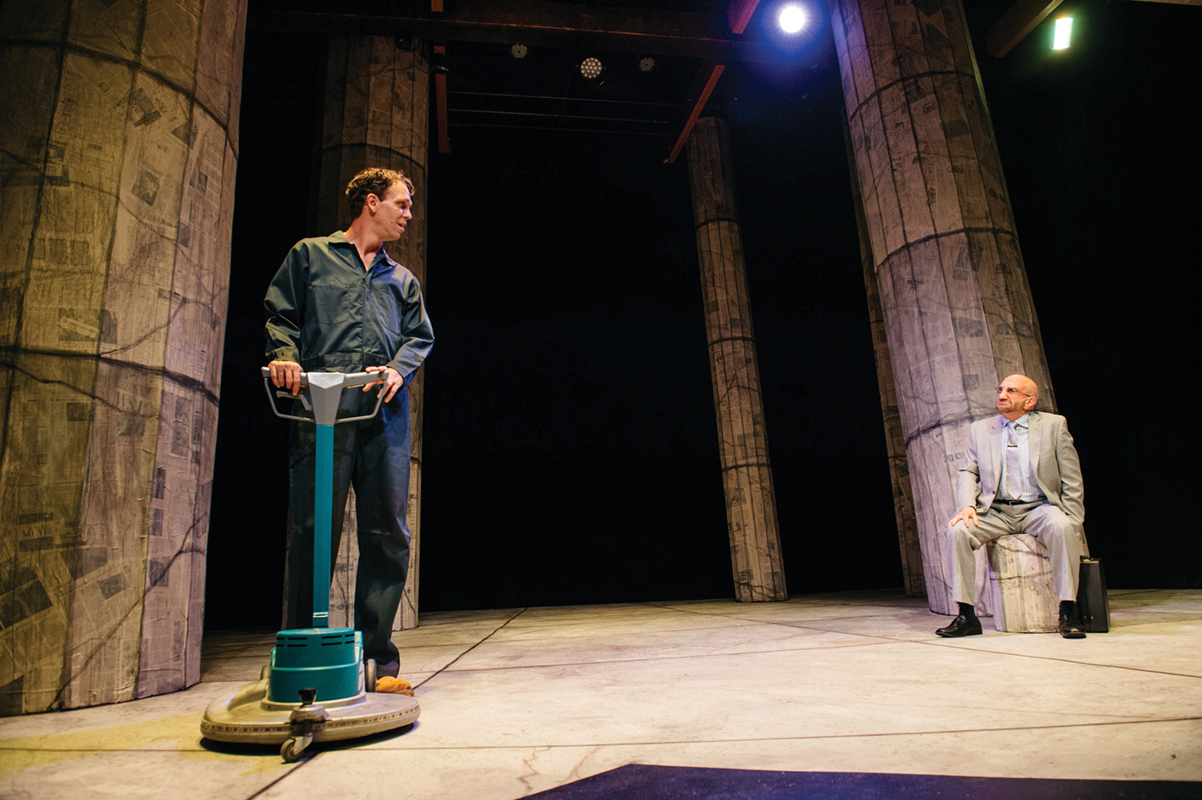 Daly, who owns the building where Francis buffs the floors, is charmed by Francis’ simple righteousness, a novelty in his world. Francis says he wants to “emancipate” Daly from his self-made pain and suffering, and Daly responds by opening up and absorbing the Lincoln-esque life lessons.

Daly also happens to represent the candidate who’s running against Leo’s boss, and befriends Francis unaware that his janitor’s repurposed Lincoln quotes are what’s floating the rival campaign. The coincidental connection comes sharply back to bite everybody, especially Leo, in a surprising second-act development that might even feel contrived in a Capra movie.

What feels genuine is Leo’s sense of obligation to his brother, as Innocenti makes his resentment palpable, well before Francis tosses that charge at him during an argument. Their heated conflict over finding some balance of freedom and structure to live by, since Francis’ last major psychotic incident, drives the plot more forcefully than Leo’s poorly delineated dalliance with chief of staff Carla (Susan Marie Rhea), who urges him to produce ever-more inspirational speeches.

Rhea herself pushes the characterization close to a parody of political amorality, but ultimately delivers on Carla’s frequent comic insults and asides. And it’s really through her, and a brilliantly written speech exposing Lincoln’s less-than-heroic acts, that the play carries out one of its key missions: to remind us that sounding inspirational should never be more important than being truly inspired.

André Hereford covers arts and entertainment for Metro Weekly. He can be reached at ahereford@metroweekly.com. Follow him on Twitter at @here4andre.
← Previous Story Theater Reviews: If I Forget and The Pianist of Willesden Lane
Next Story → Theater Review: Ford’s Theatre’s “Born Yesterday”