Home / Arts + Entertainment / Stage / Theater Reviews: If I Forget and The Pianist of Willesden Lane

Theater Reviews: If I Forget and The Pianist of Willesden Lane 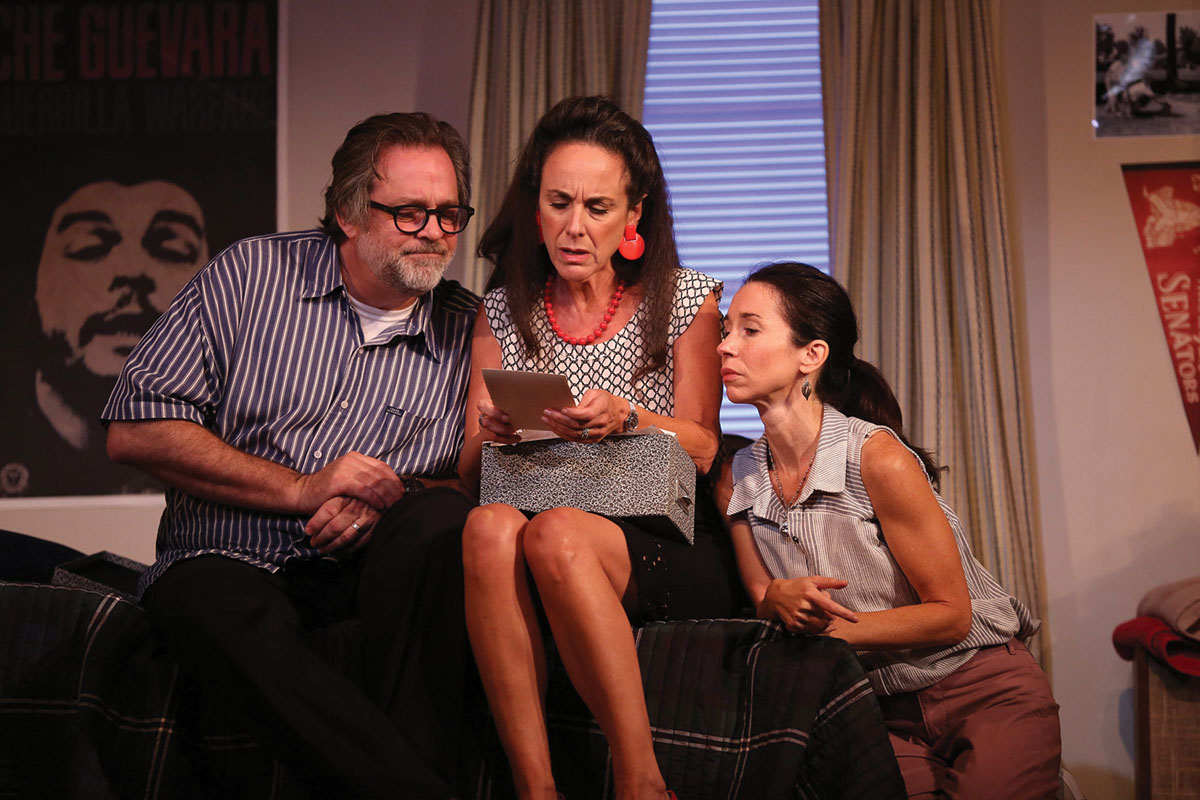 If I Forget — Photo: Carol Rosegg

Studio Theatre’s staging of Steven Levenson’s If I Forget (★★★★) offers a moving, if uneven, production of a powerful play. The gripping D.C.-set Jewish family drama, ignited by fierce political debate, seems designed by Levenson, a Bethesda native, to cajole and discomfort in equal measure. It’s up to director Matt Torney to keep the intra-familial mudslinging not just emotionally ripe but entertaining, and he and the cast are up to the task. Opening mood music that sounds disconcertingly like the theme of a treacly TV drama casts doubt at the outset, but Torney and company prove to know their way around the Tenleytown home of the play’s Fischer family.

Three adult siblings — Holly (Susan Rome), Mike (Jonathan Goldstein), and Sharon (Robin Abramson) — gather at the home of their father, Lou (Richard Fancy), ostensibly to celebrate dad’s 75th birthday. Of course, no one is ever really just home to pop bubbly. It’s the summer of 2000, and much fuss is made over the storefront property that Lou owns on swiftly up-and-coming 14th Street. The eldest sibling, Holly, wants to take over the location for her new business venture, financed by her attorney husband, Howard (Paul Morella), and she’s willing to pay market rate rent to occupy the space.

Sharon, the youngest, has grown close to the Latino immigrant family who currently leases the store and wants to help them by maintaining the generously below-market rent they pay her father. She lobbies in the interest of preserving the diverse character of the rapidly changing neighborhood. Or so she says.

Mike, who has come from Brooklyn with his wife Ellen (Julie-Ann Elliott), isn’t so consumed with what to do about the store. He’s preoccupied more with the upcoming election, and with the breakdown in peace talks between Arafat and Barak, given that their 19-year old daughter is touring Jerusalem on a two-week heritage trip with “the Birthright people.” Most profoundly, Mike’s bothered that dad Lou never responded after Mike sent a manuscript of his new book to read.

That was six months prior to the birthday dinner, and while Mike’s frustrations have festered, all will soon be revealed. In the midst of secrets spilling, the siblings’ differences over money, responsibility, character, parenting, politics, and religion play out as they likely have for decades, since long before their mother’s recent illness and death. 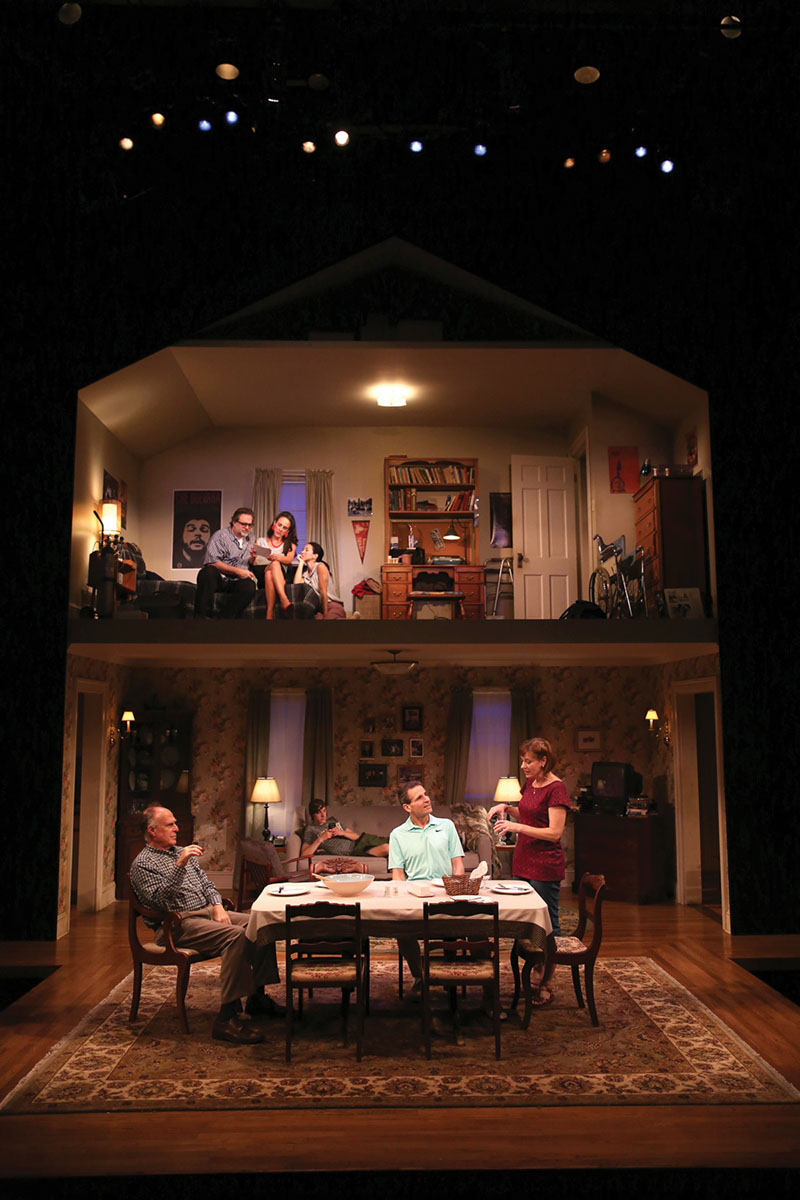 If I Forget — Photo: Carol Rosegg

Levenson sets great traps for each of the characters, granting them all the tools to foil or free themselves. They’re good at getting themselves into trouble, and full of surprises, too, with the exception of Holly and Howard’s teenage son, Joey (Joshua Otten). The saggy-jeans-wearing Nintendo-bot amounts to a fairly lazy depiction of youth, and Otten’s shrill performance doesn’t add much dimension to it.

Rome reveals boundless facets of motherhood and sisterhood in her turn as Holly. And mingled with that is the almost wholly separate part of her being that’s concerned with her marriage. Rome brings it all together beautifully, and with lacerating humor. Abramson’s Sharon, however, probably gets the show’s best punchline (about an ex), and the actress delivers it perfectly.

At a certain point, the line blurs between Sharon being insistent and needy, and Abramson pushing too hard in the performance. But there’s good counterbalance in the ensemble. Elliott is intriguing to watch as Ellen, the quietly constant wife who accepts that in the Fischer house she’s a family member who’s not a “real” Fischer. In a similar boat, Howard starts out as sort of a dud, then gets more interesting as the story moves along, thanks in large part to Morella’s emotional range to go where the character’s odd disclosures might lead.

Range barely describes the breadth of Goldstein’s gutsy performance as Mike, who rants, rages, listens, and persuades. Mike seems to care deeply about everyone and everything, while seeming equally as self-involved as Holly or Howard. He shows charming humility, but he’s also self-righteous, a strident ideologue who’s not entirely wrong about all his ideas.

Mike is the drama’s trigger for an argument about modern Jewish identity that involves everyone at the table, and just about anyone else who believes that peace matters in this world. All too appropriately for a Leftist intellectual university professor, Mike talks too much and bloviates occasionally. Goldstein appears unafraid to bare every bit of the man, even if members of Mike’s own family find it offensive that he’d condemn fellow Jews for, in his point of view, exploiting the memory of the Holocaust for political, cultural, or financial gain.

Mike argues for his right to be anti-religious without being labeled an anti-semite. His father doesn’t answer for or against what Mike is right to do. But Lou does share with the family a tale of the horrors he and his army unit witnessed when they arrived as liberators at the Dachau concentration camp. The soldiers searched each wretched structure there and only found misery.

It’s a dark vision of hate and cruelty, molded by keen direction and Fancy’s fine performance into a stunning speech. Mike shouts that he doesn’t believe in ghosts, but this is a play with the power to raise a few. 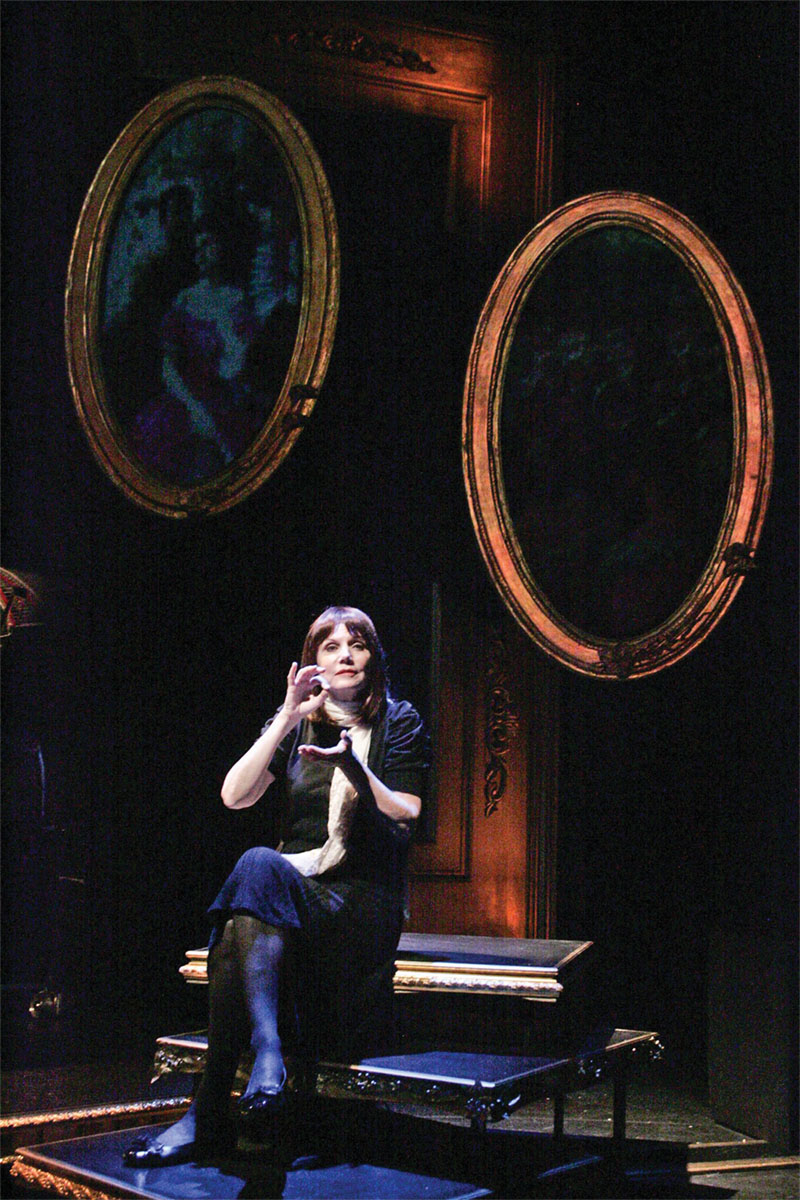 WHILE THE FISCHER FAMILY argues about a distinction between remembering the Holocaust and exploiting the memory of the Holocaust, Hershey Felder’s biographical drama The Pianist of Willesden Lane (★★½) eschews any such cynicism.

Instead, Felder opts for pure sentimentality in telling the story of young Jewish pianist Lisa Jura’s perseverance through her darkest hours. Based on Mona Golabek and Lee Cohen’s book about Jura, eulogized here as “the world’s most wonderful mother,” The Pianist of Willesden Lane adopts music and memory as the formats for an old-fashioned tale of survival.

Golabek, a Grammy-nominated pianist, is the dramatic and musical vehicle for her mother’s story in this D.C. premiere production, directed by Felder. Golabek both portrays Jura addressing her first-person chronicle to the audience, and plays the compositions for piano that shaped Jura’s artistry and ambitions. Born in Austria in 1924, Jura’s middle class childhood was largely dedicated to her love of the piano and her dream to one day perform Grieg’s Piano Concerto in A minor onstage at Vienna’s Musikverein concert hall. But the Nazis and World War II intervened.

Even before the war, when fascist oppression began to bear down on the daily lives of Austrian and German Jews, Jura was forced to give up her weekly piano lessons. It would be the first of many deeply felt losses, yet, importantly, she held onto her life. Separated from her parents and two sisters, Jura escaped Austria via the Kindertransport before it was too late. She found herself living in a hostel on London’s Willesden Lane, which proved a safe haven until war struck London in the devastating form of the Blitz.

Golabek relays the details of Jura’s tumultuous journey in a refined storytelling style that maintains empathy but doesn’t excite the imagination as does her piano playing. While clearly admiring of her mother’s strength and determination, Golabek doesn’t come close to inhabiting Jura as a distinct character. Nor do the other figures in the story feel embodied onstage. Instead, they are described and discussed with the delicate care of a collector reciting the history of a roomful of beloved keepsakes.

The presentation, abetted by projected photos and documents, conveys empathy and soul, but evokes little of the horror and ugliness present in the story. It’s when Golabek takes to the keys, backed by pre-recorded orchestral tracks, that the story and storytelling come alive. Golabek plays as her mother taught her, as she was taught by her own mother, Malka, and here the performance truly channels the power of heritage, hope, and creativity that helped sustain Jura through what, at times, must have seemed like the end of the world.