By John Riley on October 15, 2018 @JohnAndresRiley 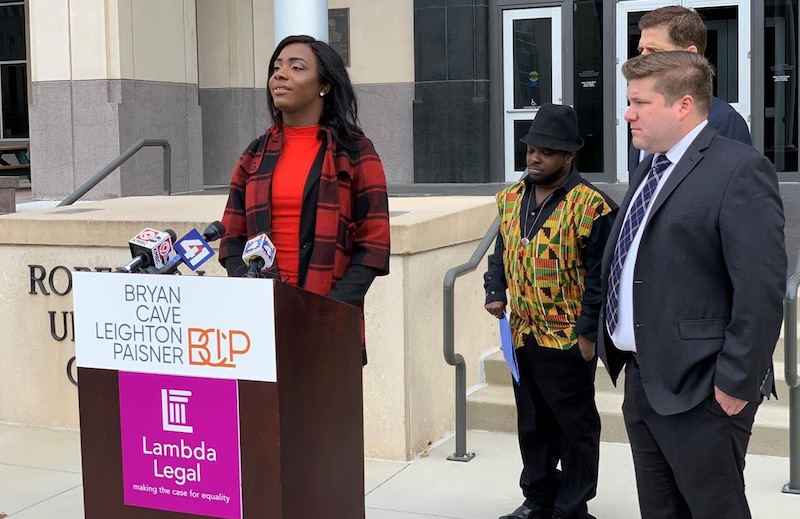 Plaintiff Nyla Foster speaks at a press conference with lawyers and fellow plaintiffs outside the U.S. District Court for the District of Kansas – Photo: Lambda Legal.

The lawsuit, filed in the U.S. District Court for the District of Kansas, argues that the state’s birth certificate policy violates the U.S. Constitution’s guarantees to equal dignity, equal protection under the law, liberty, privacy, freedom of expression, and freedom from compelled speech.

It also claims that there is no compelling, important, or legitimate governmental justification to support the policy, which forces people to lie about their identity in order to avoid violence, discrimination, or harassment.

“By not allowing transgender people like me to correct our birth certificates, the state complicates every aspect of our lives,” Luc Bensimon, a 46-year-old resident of Topeka, said in a statement at a press conference following an appearance in court on Monday.

“Having to present a birth certificate that incorrectly identifies me as female makes it easier for people to discriminate against me based on my gender identity, on top of the discrimination I already confront based on my disability,” added Bensimon, who suffers from a mild form of cerebral palsy.

Kansas is currently one of just three states, along with Tennessee and Ohio, that does not allow people to change the gender marker on their birth certificate for any reason.

In arguing its case, Lambda Legal has also has pointed out that Kansas’s birth certificate policy runs counter to the state’s own policy allowing gender markers to be changed on driver’s licenses.

“I was able to correct the gender marker on my driver’s license, but I can’t do the same in my birth certificate, forcing me to disclose my transgender identity when I present these inconsistent documentation,” Nyla Foster, the 30-year-old lead plaintiff in the case, which is referred to as Foster v. Andersen.

According to the 2015 U.S. Transgender Survey, almost one-third of transgender individuals who showed an identity document with a name or gender marker that conflicted with their perceived gender were harassed, denied benefits or services, discriminated against, or assaulted.

“The birth certificate policy at issue in this case is archaic and discriminatory. Kansas is out of step with the rest of America,” Omar Gonzalez-Pagan, senior attorney at Lambda Legal, said in a statement. “Forty-seven states, D.C., and Puerto Rico acknowledge the importance of individuals having access to essential government identity documents that accurately reflect their sex, consistent with their gender identity. It is about time Kansas joins them.”

John Riley is the local news reporter for Metro Weekly. He can be reached at jriley@metroweekly.com
← Previous Story Wisconsin jury awards $780,000 to transgender state workers who were denied insurance coverage
Next Story → Anti-gay Republican candidate for Georgia governor is advertising on Grindr