By John Riley on November 1, 2018 @JohnAndresRiley 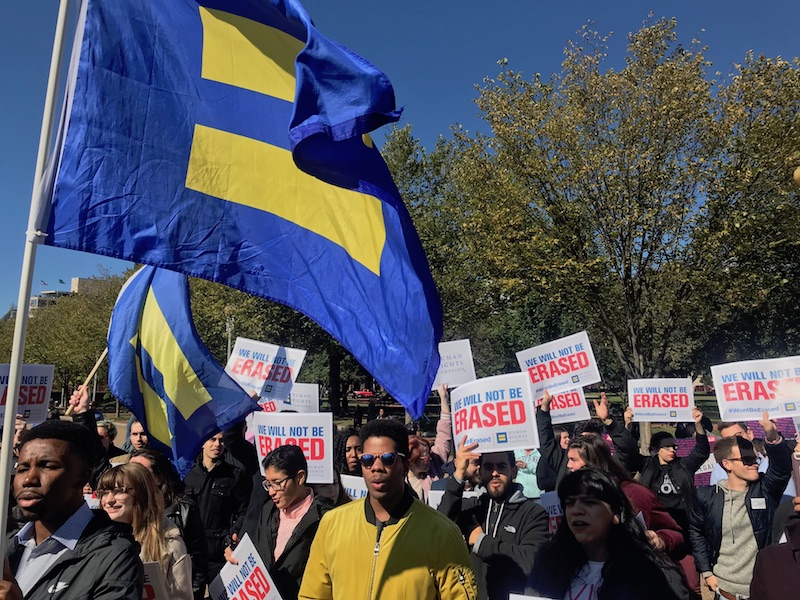 Fifty-six major companies are standing in solidarity with members of the nation’s transgender, intersex, and gender-nonconforming communities and expressing their opposition to a Trump administration proposal that, if enacted, would erase civil rights protections for the transgender community.

Over the past decade, transgender and gender-nonconforming people have benefitted from a slew of federal court decisions and government policies (under the Obama administration) that recognized the transgender community’s existence and found that transgender people were protected by laws prohibiting discrimination based on sex.

But it was recently revealed that Trump administration officials were circulating a memo from the Department of Health and Human Services outlining plans to define “sex” as binary, fixed, and based on one’s genitalia at birth. Were government agencies to adopt that definition, transgender people would no longer be eligible for certain gender-specific programs or benefits, and would no longer enjoy protections from discrimination in education under Title IX or in employment, housing, and public accommodations under Title VII of the Civil Rights Act.

The 56 companies, who employ nearly 4.8 million employees and have a collective annual revenue of more than $2.4 trillion, announced on Thursday that they had signed a statement expressing their support for the transgender community and arguing that trans individuals should be entitled to protection under the law. Additional companies are expected to sign onto the statement in the coming days.

The statement professes that diversity and inclusion are good for business, and that discrimination imposes enormous productivity costs and prevents companies from retaining highly-qualified workers.

“We, the undersigned businesses, stand with the millions of people in America who identify as transgender, gender non-binary, or intersex, and call for all such people to be treated with the respect and dignity everyone deserves,” the letter reads. “We oppose any administrative and legislative efforts to erase transgender protections through reinterpretation of existing laws and regulations. We also fundamentally oppose any policy or regulation that violates the privacy rights of those that identify as transgender, gender non-binary, or intersex.

“In the last two decades, dozens of federal courts have affirmed the rights and identities of transgender people. Cognizant of growing medical and scientific consensus, courts have recognized that policies that force people into a binary gender definition determined by birth anatomy fail to reflect the complex realities of gender identity and human biology,” the statement continues.

“Recognizing that diversity and inclusion are good for business, and that discrimination imposes enormous productivity costs (and exerts undue burdens), hundreds of companies, including the undersigned, have continued to expand inclusion for transgender people across corporate America. Currently more than 80 percent of the Fortune 500 have clear gender identity protections; two-thirds have transgender-inclusive healthcare coverage; hundreds have LGBTQ+ and Allies business resource groups and internal training efforts.

“Equality is not a right for some, but for all. Executive actions and laws that allow discrimination erode our ability to foster vibrant, competitive workforces, which halts growth, creativity, and innovation,” Elizabeth Wood, the chief human resources officer for signatory Levi Strauss & Co., said in a statement. “Our workplaces and communities must be diverse and welcoming for all people, regardless of race, sex, national origin, ethnicity, religion, age, disability, sexual orientation or gender identity.”

Some companies pointed to their previously stated support for the Equality Act, which would amend the Civil Rights Act to explicitly prohibit discrimination against members of the LGBTQ community.

“Treating all people fairly, equally, and with respect is the very core of IBM’s values,” Tia Silas, IBM Coporation’s vice president and global chief diversity and inclusion officer, added. “We believe no one should be discriminated against for being who they are. That’s why we’re proud to stand in support of the transgender and entire LGBT+ communities, and it’s why we will continue advocating for Congress to pass the Equality Act and ensure transgender individuals are treated equally under the law.”

“We’re proud that the business community is raising its voice to defend some of the most vulnerable members of our society and helping to fill the leadership vacuum created by the federal government,” Todd Sears, the founder and principal of Out Leadership, said in a statement. “As we see in our work all around the world, businesses are serving as a backstop for hard-earned progress toward LGBT+ equality — because it’s the right thing to do, and because they see their inclusive cultures as good investments worth protecting.”

“These major businesses are speaking out in one united voice to make clear they stand with the transgender community against the alarming effort by the Trump-Pence administration to gut enforcement of existing civil rights protections,” Jay Brown, senior vice president for programs, research, and training at the Human Rights Campaign, said in a statement. “The overwhelming response to this latest attack on equality sends a powerful message of solidarity to the LGBTQ community. To be clear, no matter how hard this administration continues to try, we will not be erased.”

See also: Did the Trump administration really try to erase LGBTQ people from the Census?