Film Review: Ben Is Back

"Ben Is Back" is a blatantly Hollywood-movie version of an addiction story, but it's still pretty good

When these big-screen showdowns present themselves, usually it’s not that hard for audiences (and definitely not for critics) to choose favorites. Armageddon vs. Deep Impact? Easy, Deep Impact. Capote vs. Infamous? Not as easy, but still Capote. The Prestige vs. The Illusionist? Does anyone remember The Illusionist?

Ben Is Back vs. Beautiful Boy? This one looks like a draw. Both films deal with an upper-middle-class family struggling to hold it together as a teenage son battles substance abuse. Both films are led by an A-list movie star doing capital-A acting opposite a hot, young Oscar-nominated talent who tears his heart out for the camera. Both films are even being advertised with posters picturing the respective pairs of parent and son in some form of embrace.

But those similar posters aptly convey what’s different about these lookalike films. In ads for Ben Is Back, the film’s young addict, played by Lucas Hedges, holds onto his mother, played by Julia Roberts, not with the effervescent sense of hope and connection that’s exuded by Beautiful Boy, but with a sense of petrified desperation. That about sums up the atmosphere of the film, set over a long Christmas weekend when Ben Burns (Hedges) returns home after an unexplained, but almost certainly drug-induced, absence.

His mother Holly (Roberts) welcomes him home with open arms, then spends the next few days walking on eggshells, worried that her seemingly sober son could easily return to his old ways. Or worse, she fears, he might still be using drugs and just be pretending to have kicked his habit in order yet again to take advantage of his family’s good will.

Their modern, blended interracial family is rounded out by Ben’s stepdad Neal (Courtney B. Vance), who might be done with giving Ben second chances; Holly’s other teenager, Ivy (Kathryn Newton), who also loves but doesn’t fully trust her big bro; and Holly and Neal’s two young kids together Lacey (Mia Fowler) and Liam (Jakari Fraser), whose innocence is in constant danger of being trampled by whatever turmoil Ben might cause.

For the record, the Sheff family in Beautiful Boy also is of a blended variety, and the parallels are striking, but just as striking are the ways in which the two films diverge paths. Beautiful Boy, benefiting from the authentic detail of the two published memoirs that inspired it, captures something that feels genuine about riding the rollercoaster of recovery and relapse, coping with the false starts and promises. And Chalamet is marvelous as Nic Sheff, finding a sympathetic groove for the troubled kid who might sincerely hate himself for squandering so many gifts.

Hedges, who impresses in the other awards-bait family drama Boy Erased, is, frankly, less convincing as an addict at the end of his rope in Ben Is Back. But when the film veers off into thriller territory, following Ben and Holly into drug dens and worse, verisimilitude virtually flies out the window, so it doesn’t really matter.

This is where the film’s writer and director Peter Hedges (real-life dad of Lucas) benefits from having Julia Roberts, who still can simultaneously deliver charm and knife-edge suspense as if this were the second coming of Sleeping with the Enemy. Holly is a force of nature in defense of her family and her son, and the kind of hero it’s possible to imagine could wipe out the opioid epidemic all by herself.

It’s a potent fantasy, especially viewed alongside the sad reality of Beautiful Boy‘s painful uphill battle. Choosing a favorite between the two films might not be as easy as deciding between Babe and Gordy. Perhaps, in this case, it’s best to acknowledge that though they might be competing for box office and awards, these two addiction dramas are, in fact, strangely complementary.

Ben Is Back is rated R, and opens December 14 at Landmark’s E Street and Bethesda Row Cinemas. Visit landmarktheatres.com/washington-d-c. 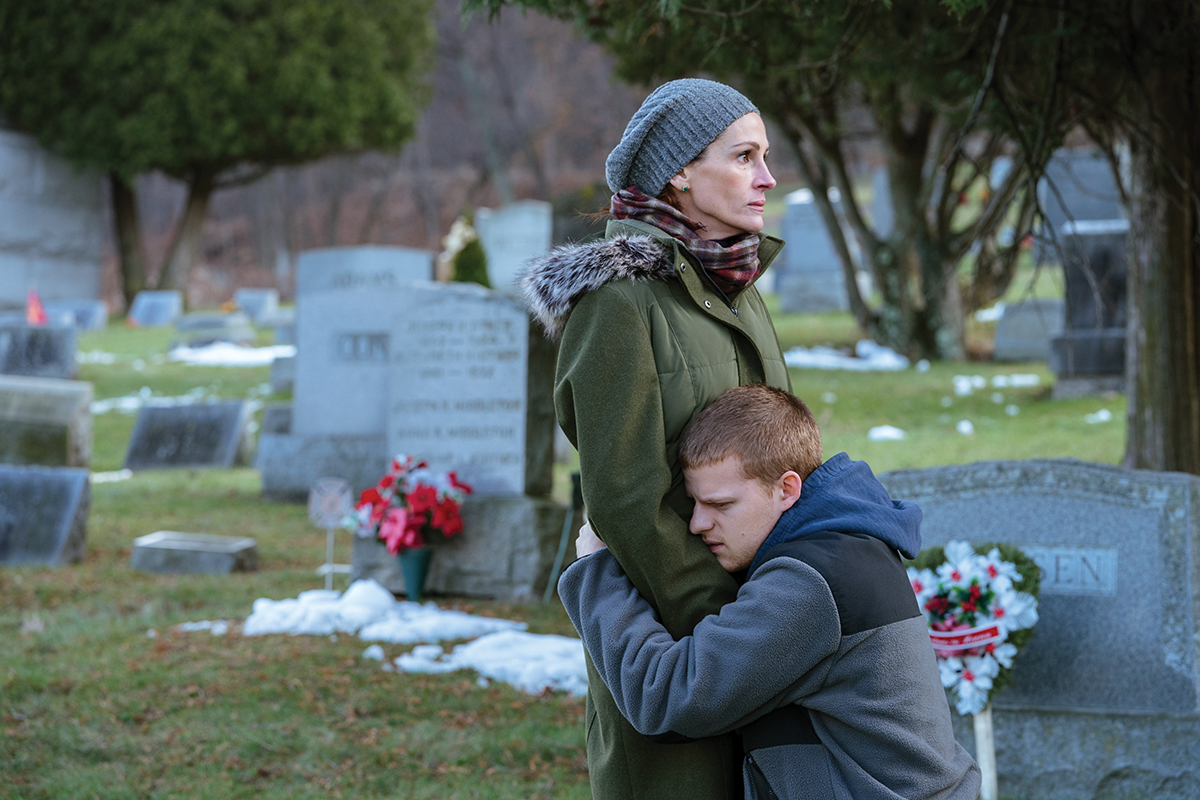