When it opened on Broadway in 1923, Sholem Asch’s drama The God of Vengeance caused quite an uproar — and not just because of its lesbian romance. The provocative three-act play, originally written and performed in Yiddish, also raised eyebrows with its dramatization of a Jewish brothel owner’s precarious spiritual journey. At the time, the play was branded obscene, and its cast and producers were hauled off to jail.

Asch’s intent as a storyteller might have been obscured by scandal, but history hasn’t forgotten him. Over ninety years later, Asch and The God of Vengeance returned to Broadway as the subjects of Pulitzer Prize-winning playwright Paula Vogel’s Indecent (★★★★).

Viewing these real-life events through a modern lens, Indecent synthesizes history, tragedy, music, and satire into a presentation that’s thematically rich and technically complex. In a solid new production at Arena Stage, director Eric Rosen and his company handle those distinct challenges adroitly.

A shrewd and compassionate play about a play, Indecent restates Sholem Asch’s case for warts-and-all authenticity by portraying elements of his life, and of the lives of the players who performed his so-called obscene play. The production’s multitasking actors, singers, and musicians embody the scrappy Jewish repertory company that first performed Asch’s work, as well as several casts of actors who have played it since.

Performing the Elder roles for the company, Victor Raider-Wexler and Susan Rome anchor the team with dexterous timing and, at times, heartrending emotion. Essaying the company’s Ingénue roles, Emily Shackelford clips impressively through a variety of accents, and sings Alexander Sovronsky’s original music beautifully. She also pairs nicely with Max Wolkowitz, as younger versions of Asch and his reassuring wife Madje, and with Susan Lynskey, portraying the girls in love in Asch’s play.

As the rep company’s stage manager and leading player, Ben Cherry does much to keep the pace of the decades-spanning Indecent flowing. In his role as Lemml, the company member who most believes in Asch’s play, Cherry literally keeps the plot flowing with narration and expository dialogue. The character can seem cloying, with Cherry perhaps overplaying the actor’s wide-eyed innocence, but Lemml’s faith in Asch is meant to be a propelling force.

The story passes from the playwright’s bedroom in 1906, to stages across Europe, and up and down Manhattan in the ’20s, with dark detours to jail, then the Lodz ghetto and into a concentration camp. Jack Magaw’s versatile scenery keeps pace with the action, with heavy wood beams rising and falling to frame key moments. The beams occasionally draw close to show the walls crowding in around the characters, or the world crashing down on the entire Jewish community.

The cast carries off their multiple role switches seamlessly as the players’ stories merge in a multilayered chronology with the stories of Asch’s fictional characters, with his manuscript, and with the traditions of Yiddish theatre.

Even the diatribes of Asch’s fiercest critics are given voice. A rabbi (well-played by Ethan Watermeier) sermonizes against The God of Vengeance, and prospective investors denounce it. Asch is forced to respond to criticism that he should write about more valiant, upstanding Jews, but Indecent asserts his right to write characters from every walk of life.

In its clear support of the artist and the play, Indecent speaks for writers who put reporting their truth ahead of prettifying their culture. The one unforgivable mistake would be for the artist to sell out his truth for a quick buck. Dishonesty is what’s truly obscene.

Vogel glorifies artists who risk it all for truth, and finds beauty in the culture she’s deconstructing. Indecent espouses a warm nostalgia for language and folk music, for the theater and for traveling troupes of players. The same-sex love story that’s central to Asch’s play ripples throughout the play, as well.

Lemml says he can never remember where this story begins, as a hint that this story never ends either. Its tale of hope and love and fear and oppression just keeps getting retold by different players on different stages, drifting further and further from the truth — except for those instances when someone cares enough to hold tight onto the facts. 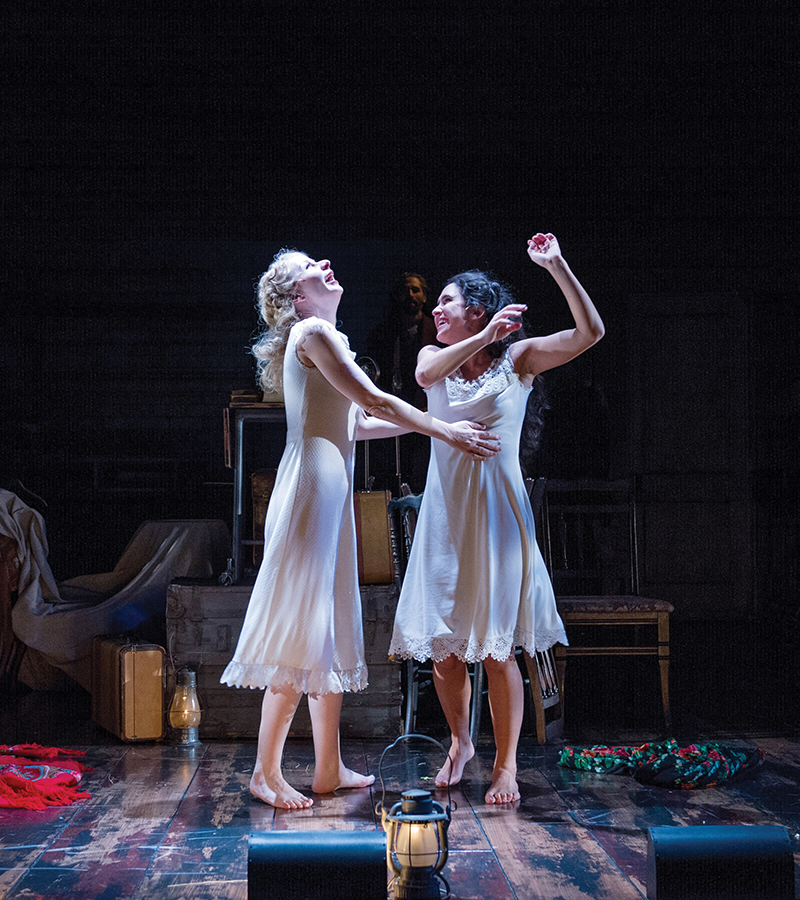