Home / Arts + Entertainment / Stage / Theater Review: The Panties, The Partner and The Profit

Theater Review: The Panties, The Partner and The Profit

David Ives' "The Panties, The Partner and The Profit" offers bold idea, but a dearth of laughs

You can’t fault a wonderful playwright for trying a bold idea. Still, admiring the effort isn’t the same as enjoying it. The truth is that David Ives’ message-filled The Panties, The Partner and The Profit (★★★) is nowhere near as fun and fruity as his inspired adaptations of classical French comedies, and it feels rather dull by comparison. Frankly, it’s hard not to wish he’d just dispensed with the social commentary and gone for the scathing asides and comic gold instead.

It’s not as if he is adhering slavishly to the original works — a series of German Expressionist plays by early 20th century German playwright Carl Sternheim. Although Ives also follows a family through the generations as means to make socio-political comment, he diverges into a new era, a new country and a new format, turning three of the plays into linked mini-dramas, played in succession and sans intermission. Ives’ family begins with an American couple in 1950s tenement Boston, moves through a late ’80s afternoon in the office of a young Wolf of Wall Street, and ends somewhere in the future with sibling rivalry and reunion in the cavernous interior of an Ocean-view manse.

If this fun reimagining sounds like the perfect fodder for Ives’ unique brand of irreverent wit, such frivolity is not to be. Although there is humor and a sardonic eye — which director Michael Kahn orchestrates with much flair — Ives tempers all with a deep and abiding commitment to his own, updated take on Sternheim’s commentary. He is eager to comment on the state of humanity as it continues to evolve, at least in the West, but the plays feel trapped between trying to be funny and trying to send a “message” and it never quite works. As admirable as Ives’ sentiments may be, by the time we get to The Profit, the evening has devolved into a rather dull teachable moment delivering a lesson we’ve all had a few times too many. A darker and far more interesting theme — that we are all “alone” — is toyed with, but never explored.

The problems start with The Panties. Despite the delicious premise of good Catholic wife Louise Mask (a guilelessly charismatic Kimberly Gilbert) accidentally dropping her knickers in the middle of a crowd and attracting a couple of ardent suitors, the “madcap” comedy never quite works and the takeaways are anything but original. If there is more to this than acknowledging the half-lives of traditional women in the 1950s married to men like Louise’s husband Joseph (played large by Carson Elrod with a whiff of Jackie Gleason), it’s hard to fathom. And although Ives’ suggestion that some unexpected characters might be gay could have been hilarious in a true comedy of manners, in this telling, with its heavy display of Louise’s thwarted life, it feels facile, almost surreal, and adds little.

As The Partner arrives with the late 1980s, the Masks’ adult son Christian (played with appropriately sweaty energy by Kevin Isola) is on the cusp of a Wall Street partnership and must prove his pedigree to board member William Hamilton (played with relish by Tony Roach). But when Christian tries to cut ties with sugar-mama Sybil Rittenhouse (a comically super-charged Julia Coffey), she threatens to reveal his humble beginnings and the shenanigans begin.

The farce ramps up when the Mask parents make an appearance, with Gilbert and Elrod finally delivering on their comic potential. But although the Wall Street vignette is funnier and the commentary delivered with more flamboyance and wit, the takeaways on class and appearances are still ho-hum.

The temperature changes again in The Profit, with a third-generation Mask, the incredibly rich and vacuous Louise (Gilbert) spending her days in a cushy Bluetooth world. Life soon begins to unravel thanks to elder sister Ursula (Turna Mete) who is now an ardent follower of the anti-materialist guru Jack Reeve (Roach) and some ominous natural disasters. When a neighbor, Rabbi Mandelshtam (Isola) and local tramp, Joe Jones (a pitch-perfect Elrod), turn up looking for shelter, the group begins to realize that, one way or another, life will never be the same. Unfortunately, as with the other plays, the life lesson is no more or less original than anything else here.

It’s hard to diss a playwright brave enough to riff on German Expressionism. It’s just too bad he didn’t throw off a bit more ballast.

The Panties, The Partner and The Profit plays through Jan. 6 at the Shakespeare Theatre Company’s Lansburgh Theatre, 450 7th Street NW. Tickets are $44 to $118. Call 202-547-1122 or visit shakespearetheatre.org.

The Panties, The Partner and The Profit at Shakespeare Theatre 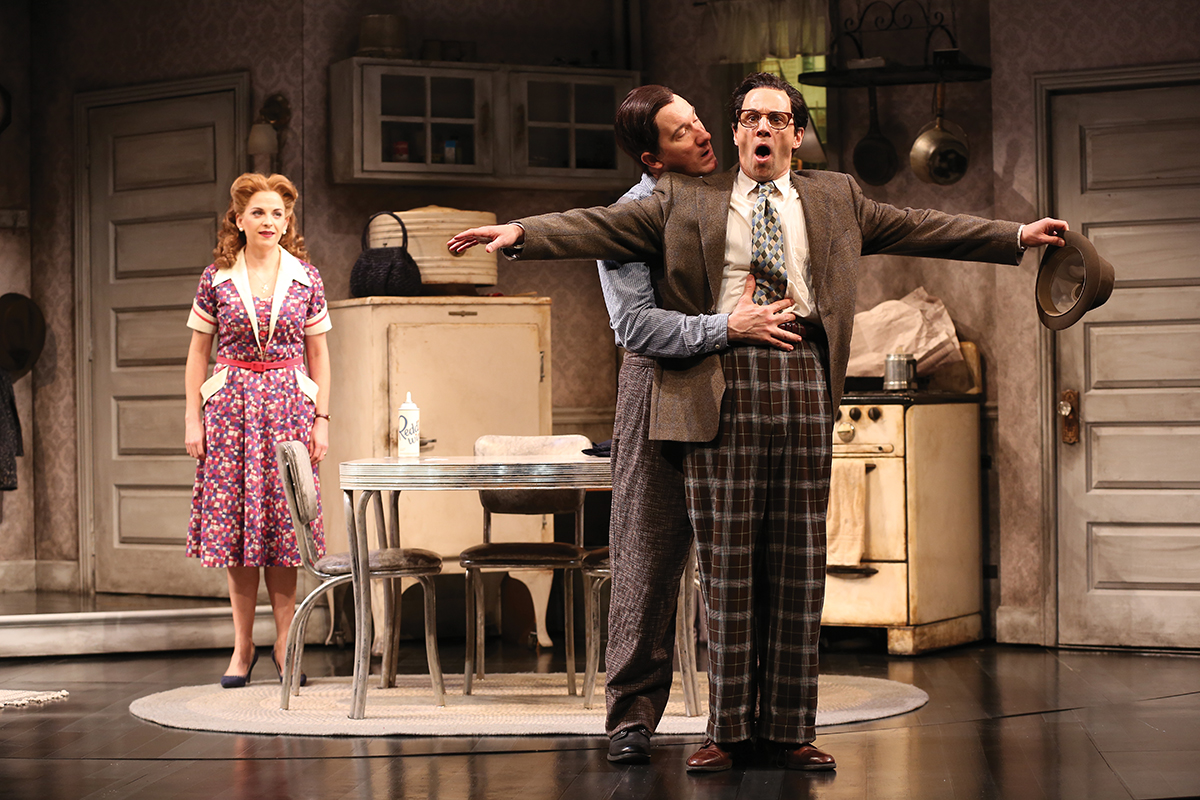