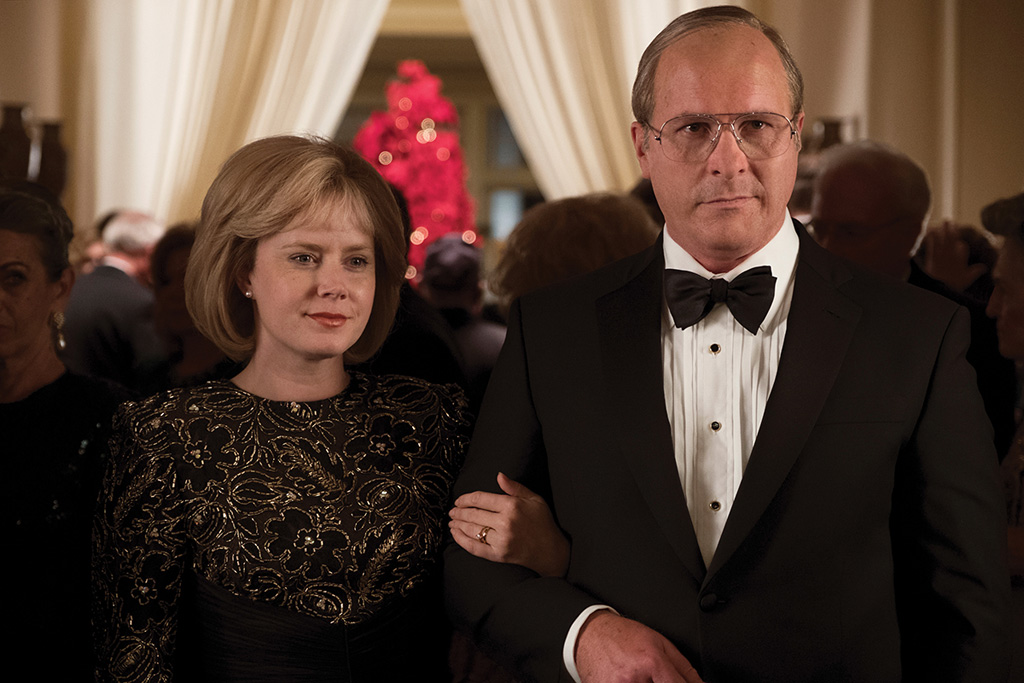 In a bracing early scene of the caustic comedy Vice (★★★½), a fired-up Lynne Vincent (Amy Adams) gives her floundering fiancé Dick Cheney (Christian Bale) a tough-love pep talk that stands as the make-or-break moment in the movie’s depiction of their powerful union.

It’s 1963, and 22-year old Cheney, thoroughly humbled by a recent DUI and expulsion from Yale, slumps before her like a wounded animal. But rather than soothe her man, Lynne is determined to rile him into recovery, or rip him to shreds. Either way, she simply won’t settle for the sad-sack souse he’s on his way to becoming, so he’d better shape up and fast.

Amy Adams, as gifted as any actor currently working in cinema, turns in a virtuosic performance, driving home one of the film’s many outward nods towards the idea of wielding steely power from behind an enfeebled figurehead.

Of course, Cheney eventually will assume awesome powers and influence of his own, and, accordingly, Bale’s gripping performance evolves over the course of the film to track that stunning rise to power. Adopting a credible version of Cheney’s sidelong snarl, and adding some girth to his face and frame, Bale blossoms into brutishness as Cheney barrels upward from the disgrace of that DUI to the pinnacles of American success.

He first enters the shark tank of politics as an intern during the Nixon administration, and, attaching himself remora-like to Nixon aide Donald Rumsfeld (Steve Carell), soon finds himself ensconced inside the West Wing. His office might be the size of a closet, but it’s a promising start for the father of young daughters Liz and Mary.

Presented as a man unabashedly unburdened by any lofty ideals or deeply felt political ideology, Cheney is shown as being instead extremely capable at boys’ club-style maneuvering for hegemony. Buttonholing Rumsfeld in a White House hallway to ponder what ideals might actually inform their policies, he asks, “Don, what do we believe?” Rumsfeld laughs like a hyena and shuts the door in his face. 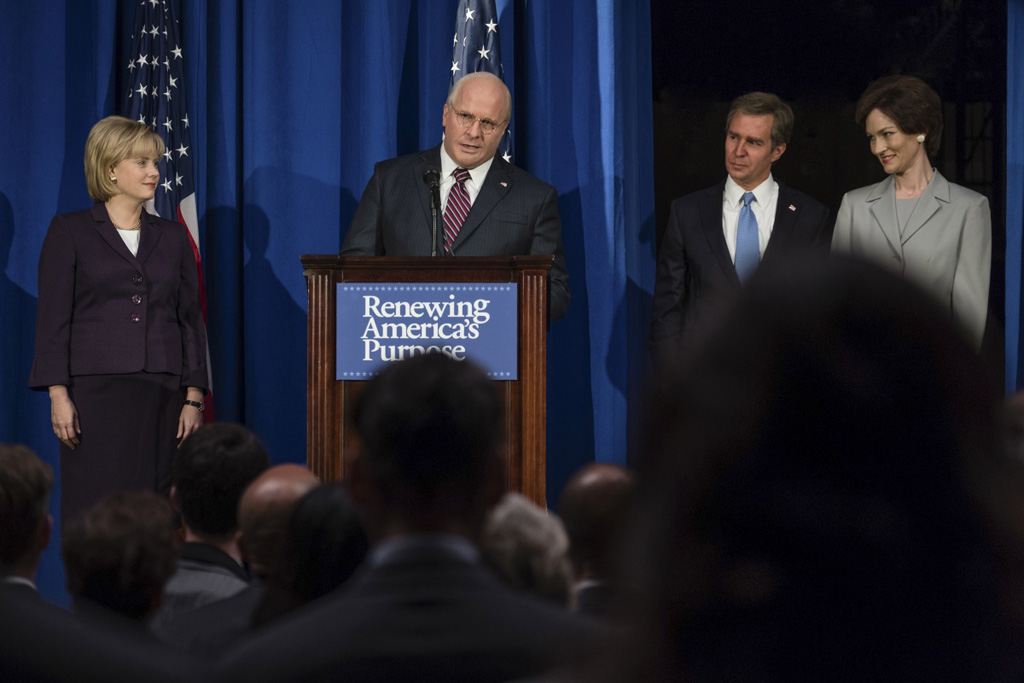 Adam McKay, the Oscar-winning director and screenwriter of The Big Short, clearly isn’t aiming for a totally “fair and balanced” portrayal of Dick Cheney. And, given what the world now knows, that would seem to be a fair approach, or certainly in the balance of things no more harmful than Cheney’s past exploits. Rather, McKay and his cast seem energized by the prospect of taking a hard swing at Dick’s history, and at some of the messes he would help engineer further down the line.

Decades after the Nixon and Ford camps were ushered out of the White House, in disgrace or defeat, Cheney returned to the halls of power as vice president to No. 43, George W. Bush (Sam Rockwell). The scene, featured prominently in the film’s trailer, of Cheney and Bush negotiating what will be the distribution of power in their presidential partnership, runs dangerously close to SNL-style caricature, but it’s undeniably solid comedy.

Similarly, a twisted fantasy interlude of Cheney, Rumsfeld, and other officials ordering up a meal of war and torture to vanquish their enemies, cover their asses, and enrich themselves is darkly pointed and damn funny. That’s the movie in a nutshell: darkly pointed, damn funny, and unafraid to indulge fiction as a means of fording for facts.

The real Dick Cheney is a harder nut to crack, but McKay’s version of him, like any fertile caricature, hews close enough to lore, while delving just beneath the surface of the well-known facts about 9/11 and the wars in Iraq and Afghanistan, to reveal a fresh perspective on his deeds and character. Vice grants that, regardless of conflicting opinions about his politics, Cheney might genuinely be a family man, as he shows unyielding support for daughter Mary (Alison Pill), who comes out as lesbian.

But when political push comes to shove in the Cheney family, and it’s time to throw her under the bus to save the electoral ambitions of older sister Liz (Lily Rabe), Mary gets run over just like anybody else who stands between a Cheney and the measure of power they crave.

Vice is rated R, and is currently playing at area theaters. Visit fandango.com.

André Hereford covers arts and entertainment for Metro Weekly. He can be reached at ahereford@metroweekly.com. Follow him on Twitter at @here4andre.
← Previous Story Film Review: If Beale Street Could Talk
Next Story → Nadine Labaki on capturing truth in her moving drama “Capernaum”