Channeling the wit and style of jazz giant Fats Waller, Signature Theatre puts a scintillating spin on Ain’t Misbehavin’ (★★★★). The score of jumping jazz and blues standards — songs from the ’20s, ’30s, and ’40s composed or popularized by Waller — can still get the whole house swinging and singing along. And the tunes serve as a rock-solid soundtrack for the Tony-winning revue’s vivid snapshots of Jazz Age life.

Finessed into a loose but expressive sequence by the show’s original ’70s masterminds Richard Maltby, Jr. and Murray Horwitz, songs like “The Joint is Jumpin'” and “‘T Ain’t Nobody’s Bizness” portray sex and mischief with an infectious bounce. And that pounding heartbeat is countered powerfully by the heartache conveyed in numbers like “Mean to Me” or “Black and Blue.”

Waller’s evocative music, and the clever lyrics penned by collaborators like D.C.’s own Andy Razaf, tell stories of onstage enemies and backstage lovers, reefer-loving swells and jitterbugging soldiers, all the while peering into nearly every quarter of black America, from the Jim Crow South to Harlem. In the show, that world of human experience is boiled down to just five performers who, between them, embody all the jazz babies and sophisticated ladies, vipers and hepcats who live in the songs. Director Joe Calarco has at his disposal a talented quintet who capture those lives in rich harmony and detail, each adding the spark of their individual gifts.

Nova Y. Payton and Iyona Blake, two powerhouse vocalists blessed with the pipes to blow down a brick house, team up to deliver Waller and Razaf’s randy “Find Out What They Like” with an extra helping of sass. They’re each just as compelling singing solo, as in Blake’s silky “Squeeze Me,” or Payton’s plaintive but unwavering “Mean to Me.”

Payton and Kevin McAllister, costars in last season’s award-winning Ragtime at Ford’s, team up again here, turning in a fabulously flirty “Honeysuckle Rose,” among other duets, trios and group numbers. McAllister’s supple baritone sounds great selling romance, or, as with crowd-pleasers “Your Feet’s Too Big” and “Fat and Greasy,” earning laughs enough to make even the weariest in the house forget their troubles for a spell.

On “Fat and Greasy,” McAllister shares the stage with Solomon Parker III, a less assured vocalist who still lights up the stage with physical confidence and forges an electric connection with the audience. Parker plies all that personality especially well via Jared Grimes’ jaunty choreography, investing every movement and gesture of “The Viper’s Drag” with smooth sensuality.

Personality is the production’s not-so-secret weapon, as each performer, including ingenue Korinn Walfall, finds space within the loose structure of story and character to amplify their own personal way of delivering a joke, a step, or a lyric. They are five distinct styles and voices who coalesce into one soulful, persuasive unit.

The dancing, in general, isn’t as tight as the singing, but the singing is oh, so tight, as is the tuxedoed band, led by music director and onstage pianist Mark G. Meadows. Even the maestro adds a wink and a smile to the party, getting in on the humor and decidedly staying out of any of the light lovers’ drama that plays out over the course of two acts.

Meadows and his musicians add to the visual impact of scenic designer Paige Hathaway’s onstage/backstage set. Before a backdrop of red bricks and velvet, the band and performers stride and swing their way back through time, back to some smoky, elegant joint way up in Harlem where happiness and hardship go hand in hand, and a grinning Fats Waller is still spreading his rhythm around. 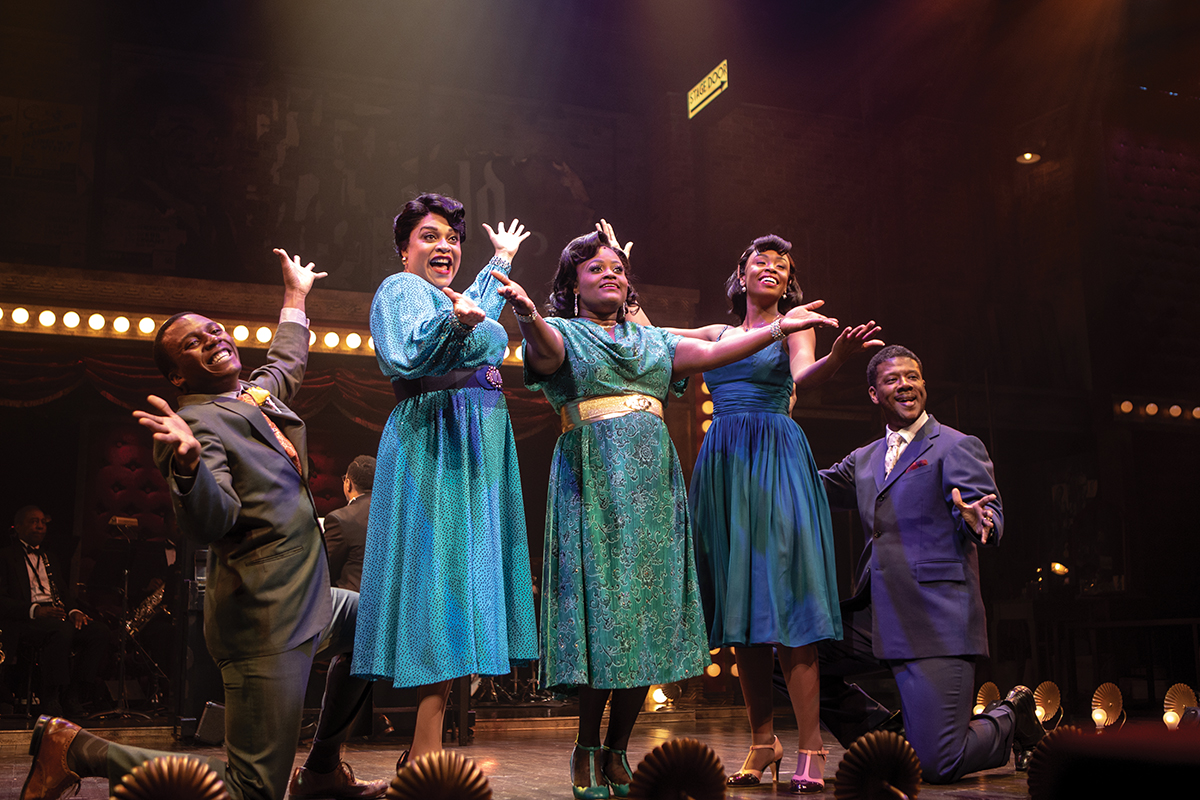