Husbands and hustlers explore sex, love, and violence in the saucy but unsatisfying Reykjavík. 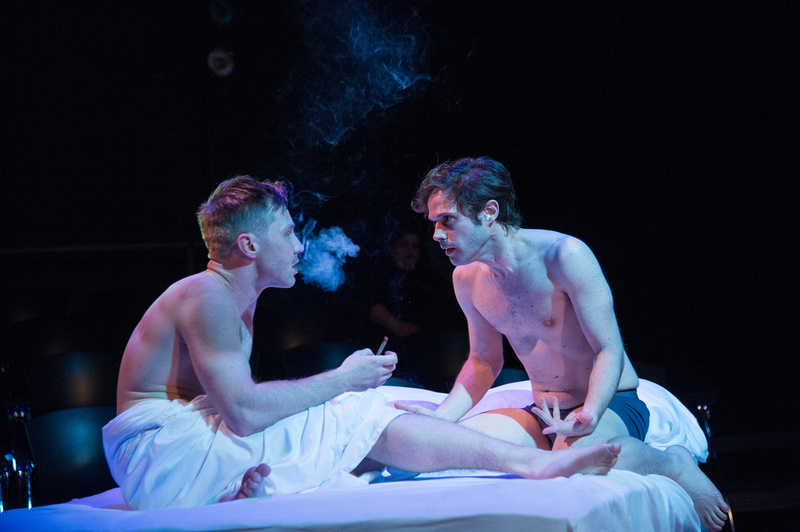 It can be strangely refreshing to hear characters onstage speak the frank, profanity-laced language of contemporary bedroom conversation. And Steve Yockey’s Reykjavík (★★ out of five), an episodic escapade through the bars, backrooms and hotel rooms of the Icelandic capital, hits a sweet spot of real talk in its series of interludes including husbands on holiday (Dylan Arredondo and Robert Bowen Smith); a role-playing hustler (Josh Adams) and his john (Arredondo); and a tourist (Adams) who hooks up with a local or two (Arredondo and Carlos Saldaña).

The thrust of Yockey’s sardonic study of mostly gay male desire comes through clearly enough in Rick Hammerly’s staging for Rorschach Theatre inside the spacious Silver Spring Black Box. Nearly every character floating through Reykjavík in search of a transcendent love, or love affair, finds that mistrust or violence gets in the way.

But, as these bed-partners and bedroom scenes shuffle on and off, some of them amusing, others suspenseful, absurd, or just unconvincing, they don’t gather much cumulative effect. The messages remain mixed, or indistinct, as do several of the characterizations.

Not just any old birds, these are observant, opinionated ravens — critics, if you will — who send terse notes to the hotel management offering analysis of everything they’ve observed in the husbands’ room.

Scenes between a hustler and john who either are playing out a rescue fantasy, or living through a horrifying reality, strike a less novel chord. Hammerly’s approach to the storyline, which might have brought some urgency and unexpected wit to a discussion of sex-trafficking, lands it squarely in the too-familiar realm of gay male fiction about damaged hustlers and johns.

Adams makes the hustler, Hank, an enigmatic manipulator, but doesn’t do enough to distinguish the guy from the other characters he’s playing. Perhaps his Hank and tourist James and lover Ebon are one person, or versions of one person. Maybe the ravens can tell us. 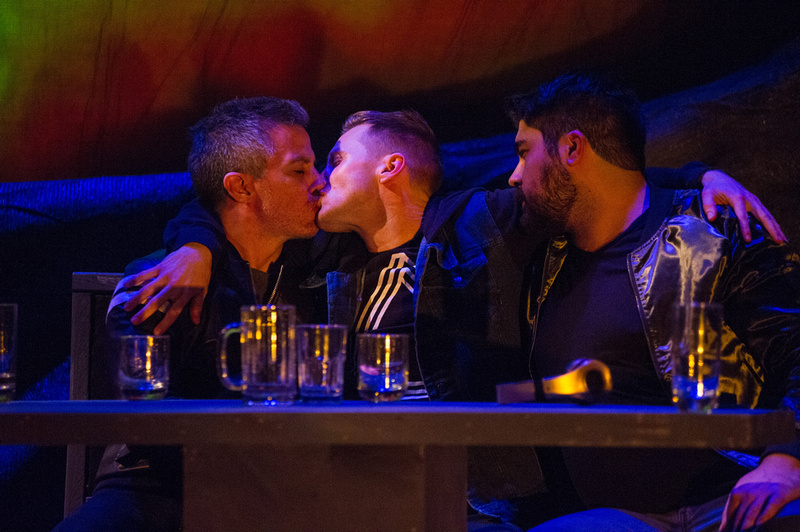 Arredondo, on the other hand, locates a different voice and center of gravity for each of his characters, including Robert and another who’s legitimately frightening. His performance might actually persuade some in the audience into believing they’re seeing two different actors from scene to scene. Dina Soltan also contributes an appealing versatility in a variety of supporting roles, and Jenna Rossman and Adams share a lovely latter scene between siblings.

Hammerly relies on Katie McCreary’s exceptional lighting design, as much as the actors, to distinguish plot, mood, and location. The lights, along with Kylos Brannon’s evocative video projections lend style, and, in the case of a momentary glimpse of the “Northern Lights,” some sweet spectacle to cut through the increasingly bitter taste of this cocktail of dour sexual encounters.

André Hereford covers arts and entertainment for Metro Weekly. He can be reached at ahereford@metroweekly.com. Follow him on Twitter at @here4andre.
← Previous Story Theater Review: Shakespeare Theatre Company’s Richard the Third
Next Story → Editor’s Pick: GALA’s The Old Man, The Youth, and the Sea