It starts off unsteady, but finds its footing by the end and delivers spectacularly.

By Randy Shulman on March 6, 2019 @RandyShulman

Forget Captain Marvel. Forget The Avengers. Forget every other superhero parked out there in both Marvel and D.C. Universes. It’s now all about Goose the cat. The orange tabby steals — no, dominates — every second he occupies in Captain Marvel (★★★★), with a performance that is by turns whimsical, ferocious, and (god, forgive me) purr-fectly nuanced. He’s the movie’s greatest joy.

Marvel fans already know why Goose (renamed from Chewie in the comics) is vital to the Captain Marvel story, but I went into Captain Marvel pretty much a neophyte and had no idea. Suffice it to say, whenever the cat took center stage, I became deliriously elated. It’s not going out on a limb to say Goose is reason enough to see the movie, probably multiple times. But there are other joys in Captain Marvel. In fact, an abundance of them.

One of them is Brie Larson, whose take on the title character is powerful, emotionally rich, and frequently funny. The movie may be yet another origin story, but directors Anna Boden and Ryan Fleck have cleverly assembled it in a non-linear manner to give it distinction. It has cookie-cutter elements, sure, but they’re jumbled up. And that helps. As the pieces of the puzzle come together, and a greater picture becomes clear, Captain Marvel goes from standard issue to something exhilarating. It erupts, volcanically, delivering a final third with remarkable punch and deft cinematic poise.

On the Marvel scale of things, Captain Marvel is akin to Ant-Man and Guardians of the Galaxy, balancing heart-thumping action with coy playfulness. Yet it also contains a hint of the social gravity that made Black Panther a potent experience. Captain Marvel is, at its core, about female empowerment. It’s about a character finding her true purpose in the universe, a coming-into-being story that will, without doubt, service several sequels, and whose title character will undoubtedly play a significant role in the upcoming finale to Marvel’s massive 22-arc film series, Avengers: Endgame.

Captain Marvel is by no means perfect. The early action scenes are a bit too run-of-the-mill and sloppily executed. They lack thrill. At one point, Boden and Fleck crib shamelessly from Star Wars, and there are times the film feels like an unnatural hybrid of a police procedural and an otherworldly sci-fi space adventure. The feeling is odder than most films of this type produce, and while it doesn’t exactly bore you, it doesn’t immediately draw you in. That comes later. 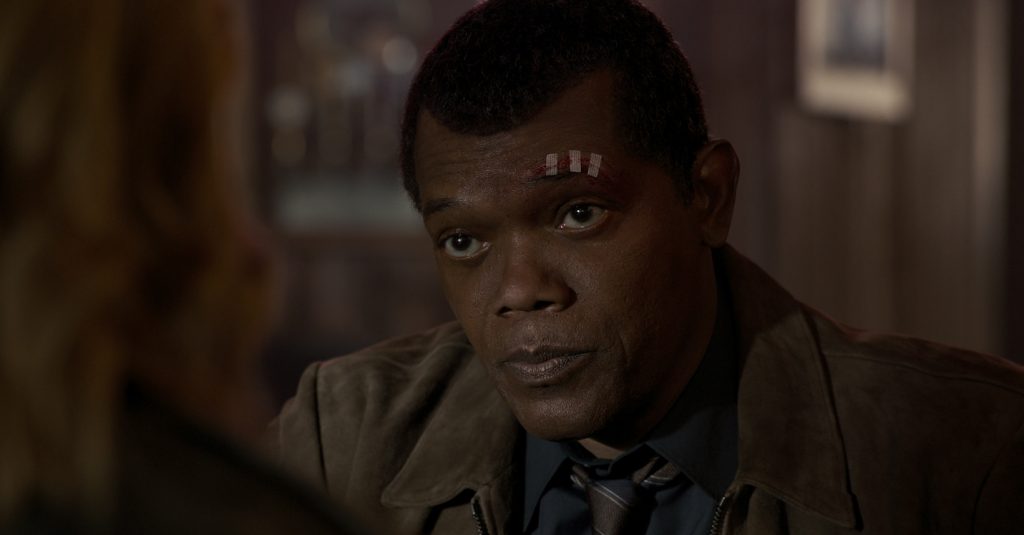 Part of the reason for this is the structure: the first half of the movie is deliberately obfuscating, taking the point of view of Vers (Larson), member of a Kree special force fighting an intergalactic war with a shape-shifting species known as the Skrulls. When Vers is captured by the Skrulls, they probe her memory, opening up a flood of questions for a woman who has no cogent memory of her past life. Those questions are answered when Vers finds herself on Earth in the 1990s, and joins forces with a pre-Avengers, pre-eyepatch Nick Fury (Samuel L. Jackson, digitally de-aged in an extremely convincing bit of movie magic).

A few well-placed revelations push the narrative forward into truly interesting territory, little of which I’ll reveal here, but some of which has to do with the Skrull general Talos (Ben Mendelsohn, who, beneath a sheath of green latex, gives a fully-weighted, deeply felt performance). As the story progresses, it attains an astonishing amount of heart, and the character of Vers — aka Carol Danvers aka Captain Marvel — attains soul, even if it’s soul accompanied by a vibrant, blazing glow and fists that produce photon blasts that can take down a star cruiser.

Larson is perfect for the role, providing the right blend of vulnerability, playfulness, and tough warrior spirit to bring the character fully to life. Any naysayers can go — well, I’ll be polite. Let’s just say she’s way beyond awesome. Jackson, who is clearly having the time of his life here, shares a spry chemistry with Larson, and their banter often feels as though it had been lifted from a Howard Hawks ’40s screwball. (The humor extends to the Skrulls as well, who tend to shrug sheepishly when screwing something up, and, of course, there’s that incredibly wonderful darn cat.)

The cast is rounded out by Jude Law, who plays a mentor to Vers, and a supremely sublime Annette Bening as the Supreme Intelligence, the A.I. leader of the Krees. A de-aged Clark Gregg makes a brief but consequential appearance as Agent Coulson, and the ’90s are both celebrated through nostalgic throwbacks to brands like Blockbuster and Radio Shack and relentlessly harpooned (think absurdly slow dial-up modems). The soundtrack is also a comforting Spotify playlist of ’90s hits.

Anyone who saw The Avengers: Infinity War will recognize a central device in the movie, a pager used by Fury in that film’s post-credit scene. The set-up is extended here in a post-credits scene (one of two) that you really ought to stick around for.

Ultimately, Captain Marvel is a bridge movie to Avengers: Endgame, as well as an origin story. But, like Guardians of the Galaxy, Black Panther, and Ant-Man, it stands triumphantly on its own, and will make you leave the theater satisfied and smiling broadly. Not to mention ready to visit your nearest animal shelter to adopt a cat.

Randy Shulman is Metro Weekly's Publisher and Editor-in-Chief. He can be reached at rshulman@metroweekly.com.
← Previous Story Film Review: ‘Greta’ is a good thriller with some laughably dumb moments
Next Story → Film Review: Jordan Peele’s ‘Us’