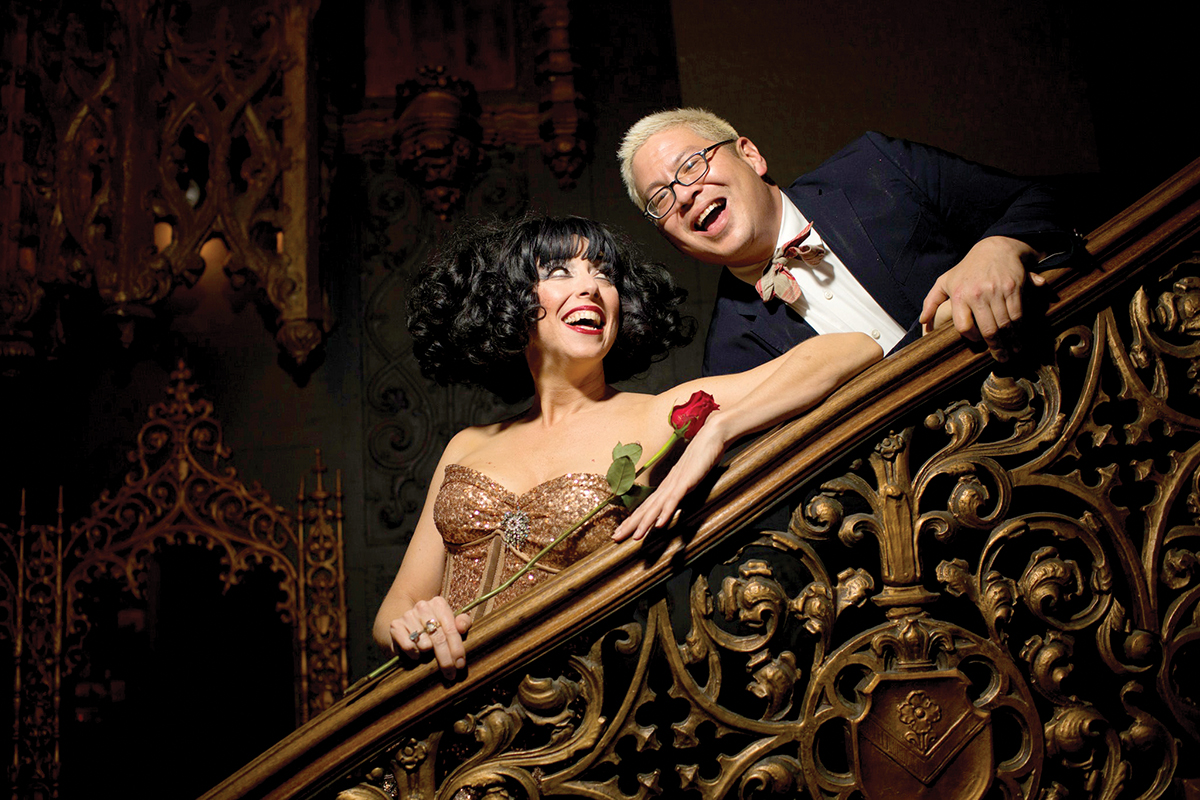 Born Melissa Madden Gray in Australia, the post-post-modern diva with the catty moniker comes to town to perform a cabaret accompanied by Lauderdale, best known as the gay founder and leader of Pink Martini, the quirky, self-styled 12-member “little orchestra” from Portland, Oregon. You could consider this a campy cocktail cabaret of the first order. It also serves as a teaser for a forthcoming new Meow Meow recording. And if past is prologue, expect a surprise cameo if a certain NPR celebrity and frequent Pink Martini guest happens to be in the crowd. Monday, March 25, at 8 p.m. Lincoln Theatre, 1215 U St. NW. Tickets are $35. Call 202-888-0050 or visit www.thelincolndc.com. 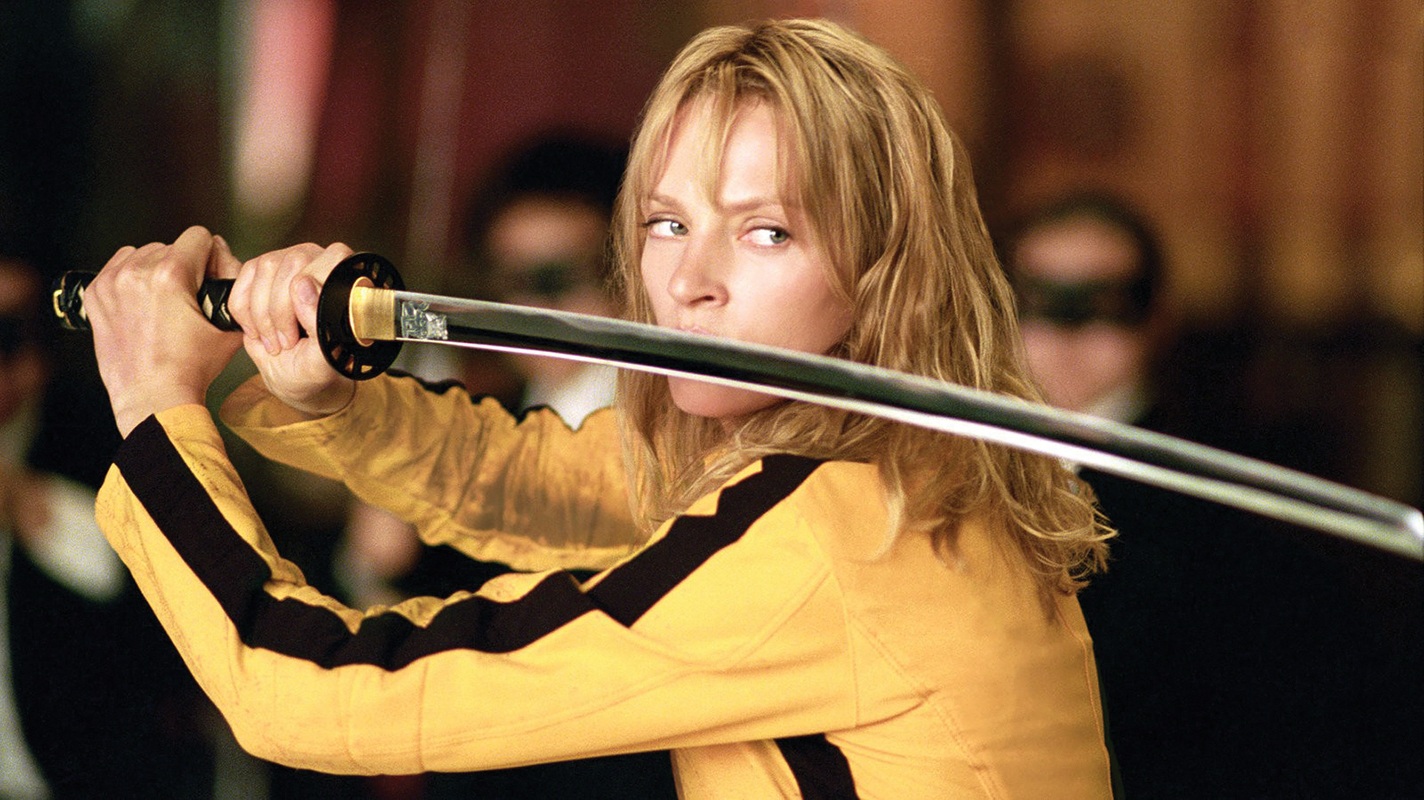 This weekend, Smithsonian Theaters celebrates the brilliant, twisted mind of Tarantino by screening several of his most influential works at the National Museum of American History. Thursday, March 21, features a Pulp Fiction party starting at 6:30 p.m. followed by a screening of the 1994 classic starring John Travolta, Samuel L. Jackson, and Uma Thurman at 8:15 p.m. Jackie Brown screens Friday, March 22, at 6 p.m. Kill Bill Volume 1 and Volume 2 at 5 p.m. and 7 p.m., respectively, and Inglorious Basterds at 9:25 p.m., all screen on Saturday, March 23. Django Unchained at 5 p.m. and The Hateful Eight at 8 p.m. conclude the festival on Sunday, March 24. The screenings are on an IMAX screen, but may not necessarily be screened in IMAX format. (Still, it’s pretty big and worth it.) The Warner Bros. Theater, 1300 Constitution Ave. NW. A Grateful Eight Film Package is $64, or $99 with Pulp Fiction Party; single tickets are $15.50 with fees. Call 202-633-1000 or visit www.si.edu/imax. 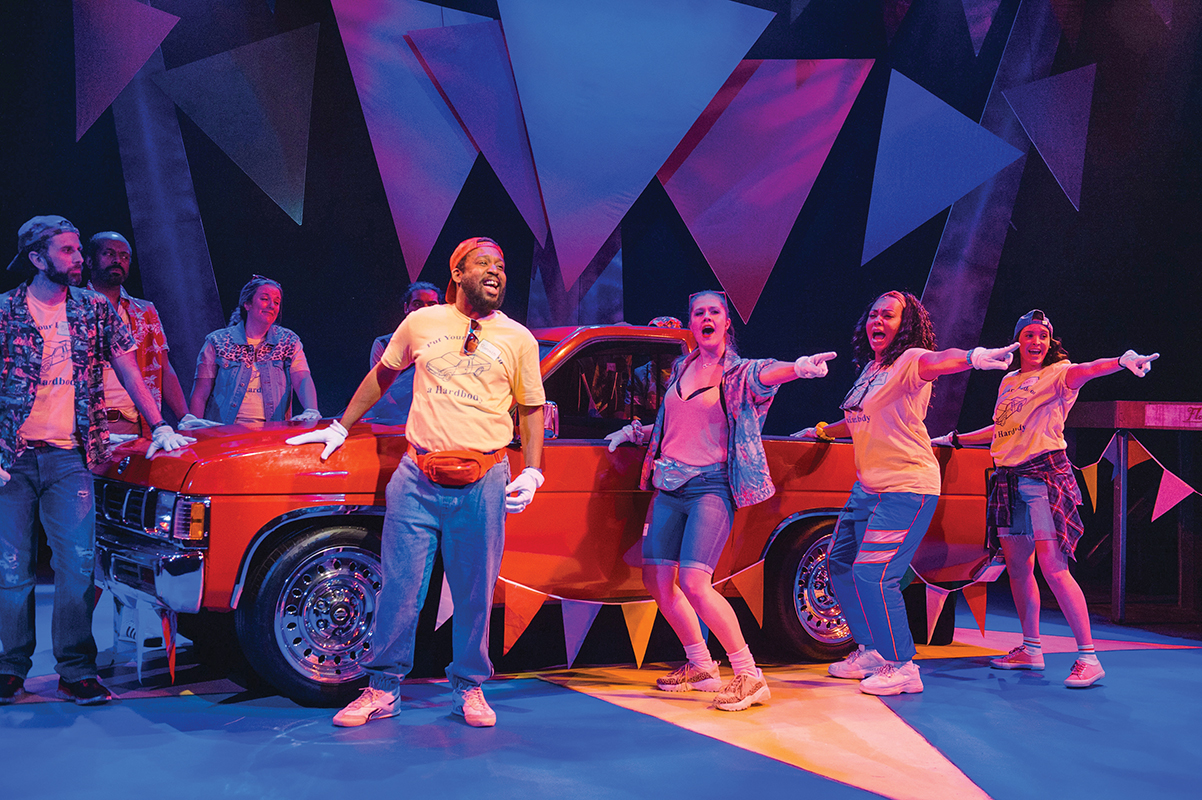 HANDS ON A HARDBODY

Keegan Theatre presents the regional premiere of a recent Broadway show featuring music written by Phish’s Trey Anastasio and lyricist Amanda Green (Bring It On: The Musical), with a book by Doug Wright. Based on a real-life competition, captured in a 1997 documentary of the same name, Hands on a Hardbody focuses on ten Texans struggling to keep at least one hand on a brand-new truck in order to win it. Elena Velasco and Mark A. Rhea direct the Keegan production featuring a large, 19-member ensemble, with Jake Null directing an eight-piece pit orchestra. Now to April 6. Keegan Theatre, 1742 Church St. NW. Tickets are $52 to $62. Call 202-265-3767 or visit www.keegantheatre.com. 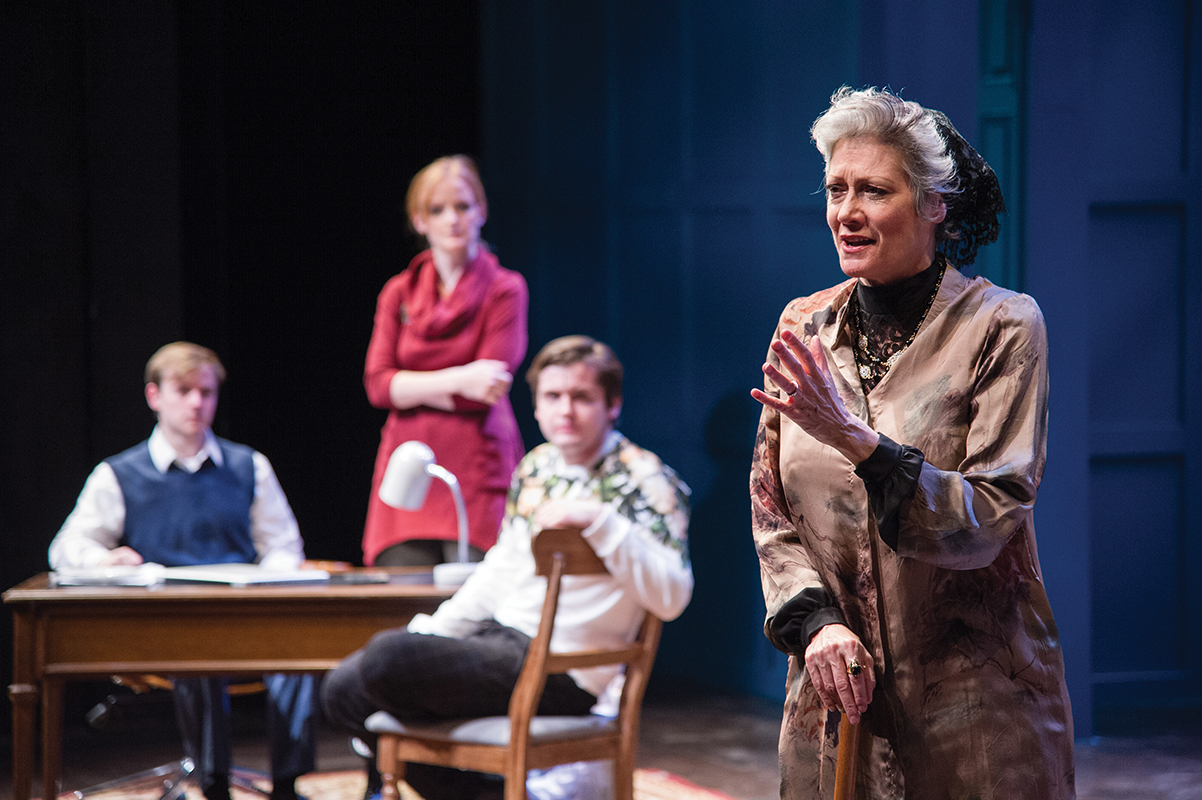 LAS CULTURISTAS PODCAST: THE I DON’T THINK SO, HONEY! TOUR

Time Out New York has called this popular weekly podcast “addictively bitchy,” while Esquire and Vulture included it among their lists of Best Podcasts of 2019 and Best Comedy Podcasts of 2018, respectively. Gay Millennial hosts Matt Rogers, a regular with New York improv troupe Upright Citizens Brigade, and Bowen Yang, a writer for Saturday Night Live, bring Las Culturistas to life in a stop in D.C., presented by Union Stage at Capitol Hill’s historic Miracle Theatre, where a parade of comedians and performers will sound off in one-minute rants on any popular culture topics of their choosing. Saturday, March 23, at 8:30 p.m. 535 8th St. SE. Tickets are $20. Call 202-400-3210 or visit www.themiracletheatre.com. 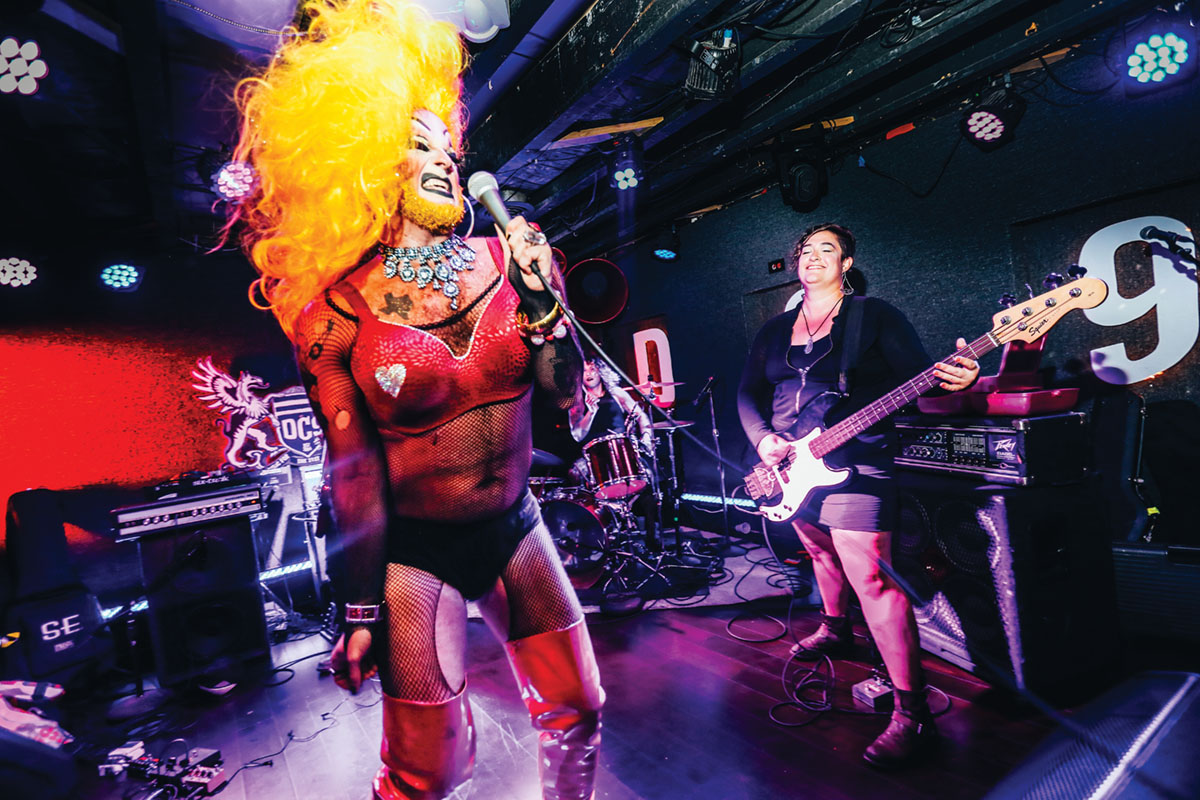 Joshua Vogelsong is well known around town via his drag alter-ego Donna Slash — and as the lead singer of LGBTQ band Homosuperior, both of which — the “punk rock Divine” and the punk rock band — he developed hand in hand. “The band is everywhere on the spectrum of queer,” says Vogelsong, who, depending on “how I feel and how much time we have,” occasionally performs as Joshua. “It’s always been about blurring the lines, and having fun with sexuality and gender…. Sometimes you feel more feminine. Sometimes you feel more butch and just wanna get up there without any makeup on.” The four-piece Homosuperior returns to Comet Ping Pong, where Vogelsong serves as bar and programming manager, to headline a show with two opening acts from Baltimore, HexGirlfriends and Wipeout. Friday, March 29, at 10 p.m. 5037 Connecticut Ave. NW. Tickets are $12. Call 202-364-0404 or visit www.cometpingpong.com. 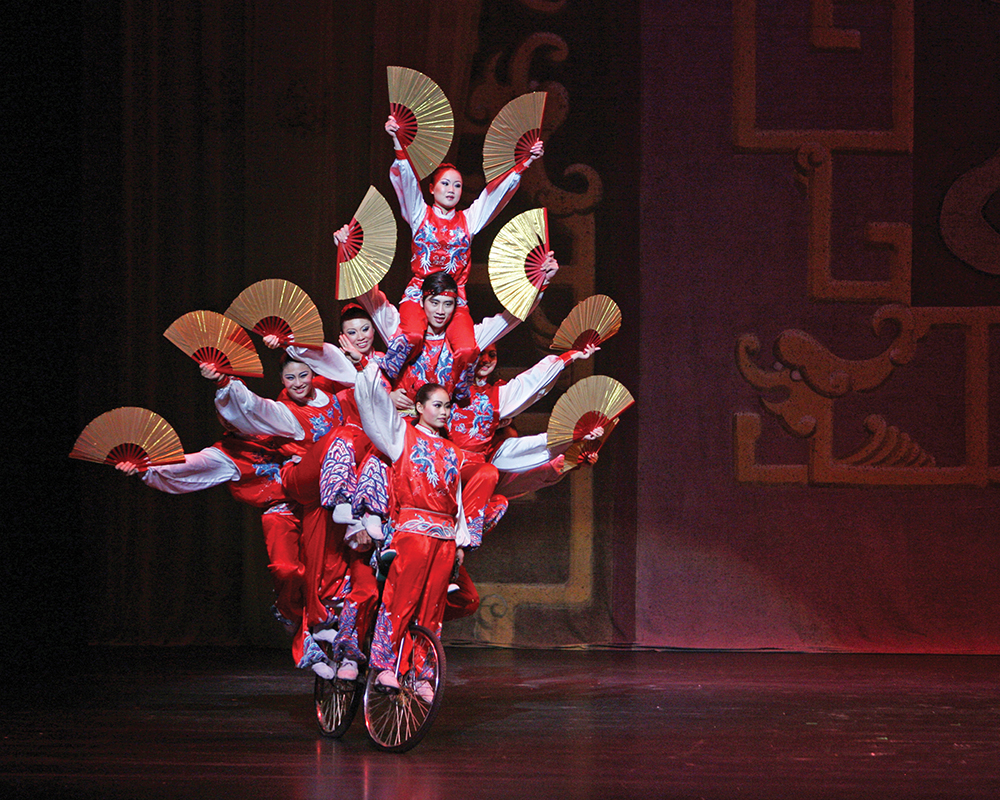 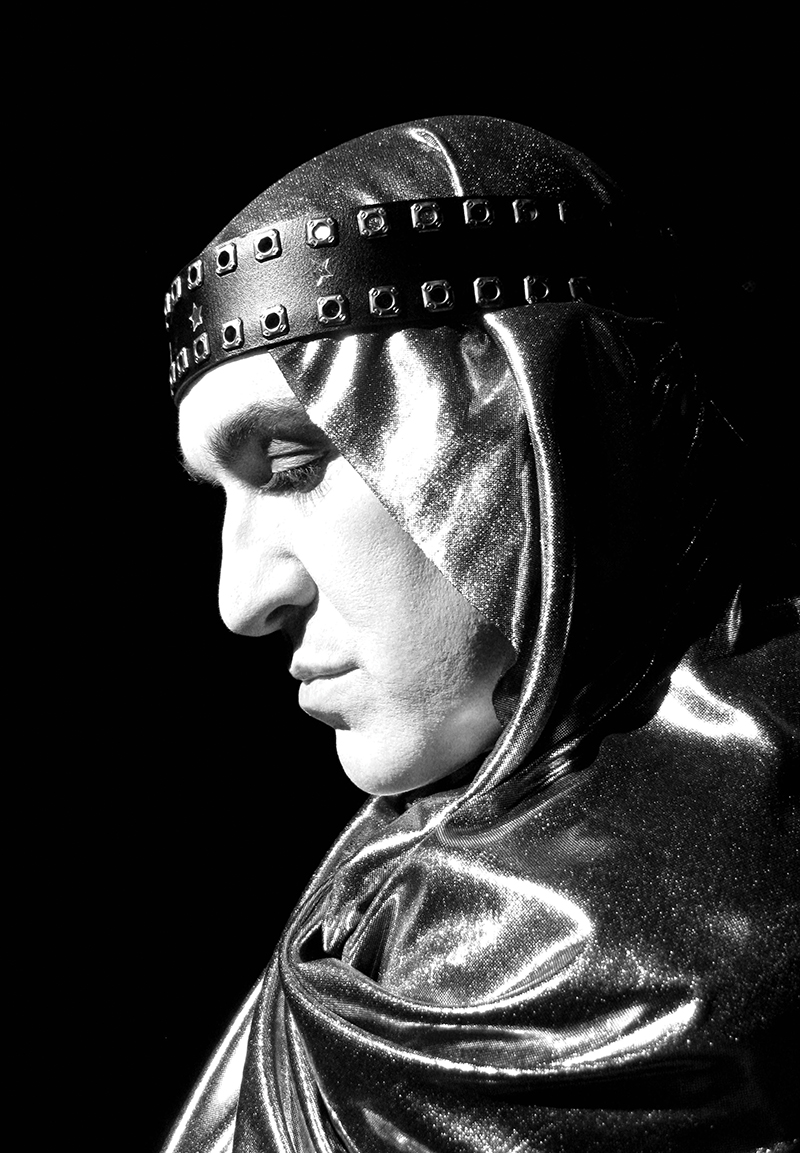 Solas Nua, the D.C.-based company focused on presenting and producing contemporary theater and performing arts from Ireland, imports this touching, challenging Olivier Award-winning one-man show from Dublin’s new play company Fishamble. Written and performed by Pat Kinevane, Silent focuses on a homeless man who dives into his splendid past through the romantic world of Rudolph Valentino. “Dare to laugh at despair and gasp at redemption,” goes one tagline to the work, which raises awareness of homelessness in a way that the New York Times critic Ben Brantley reviewed as “passionate [and] carefully wrought,” further praising the way “Kinevane interprets Valentino’s highly theatrical screen presence to stunning effect.” Remaining performances are Thursday, March 21, through Saturday, March 23, at 8 p.m., and Sunday, March 24, at 3 p.m. Atlas Performing Arts Center, 1333 H St. NE. Tickets are $45. Call 202-399-7993 or visit www.atlasarts.org. 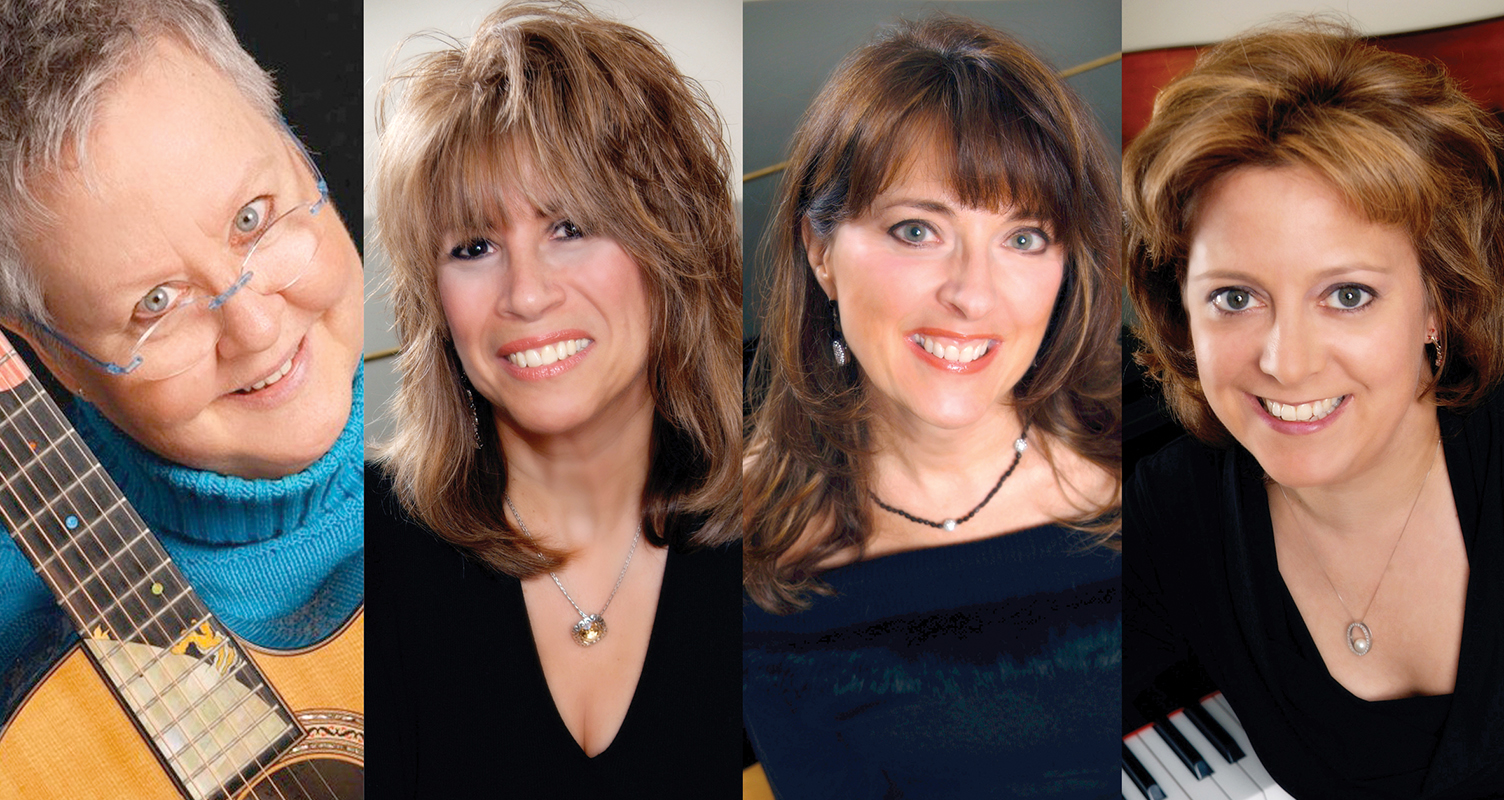 Sally Fingerett, comedic singer Deirdre Flint, and former The Hags singer Debi Smith are more than 25 years into their run as a comedic music ensemble, always performing as a quartet, with the fourth performer in regular rotation among Nancy Moran, founding Babe Megon McDonough, or Christine Lavin — who assumes the mantle for 2019. In an interview with Metro Weekly several years ago, Smith summed up the Babes’ songwriting and performing, “We look at life, as it’s happening, usually in a comedic way — [and] through a wacky viewfinder.” A taste of what’s on offer can be found in the title of their most recent show, Hormonal Imbalance v2.5: A Mood Swinging Musical Revue. Saturday, March 23, at 7:30 p.m. The Birchmere, 3701 Mount Vernon Ave., Alexandria. Tickets are $35. Call 703-549-7500 or visit www.birchmere.com. 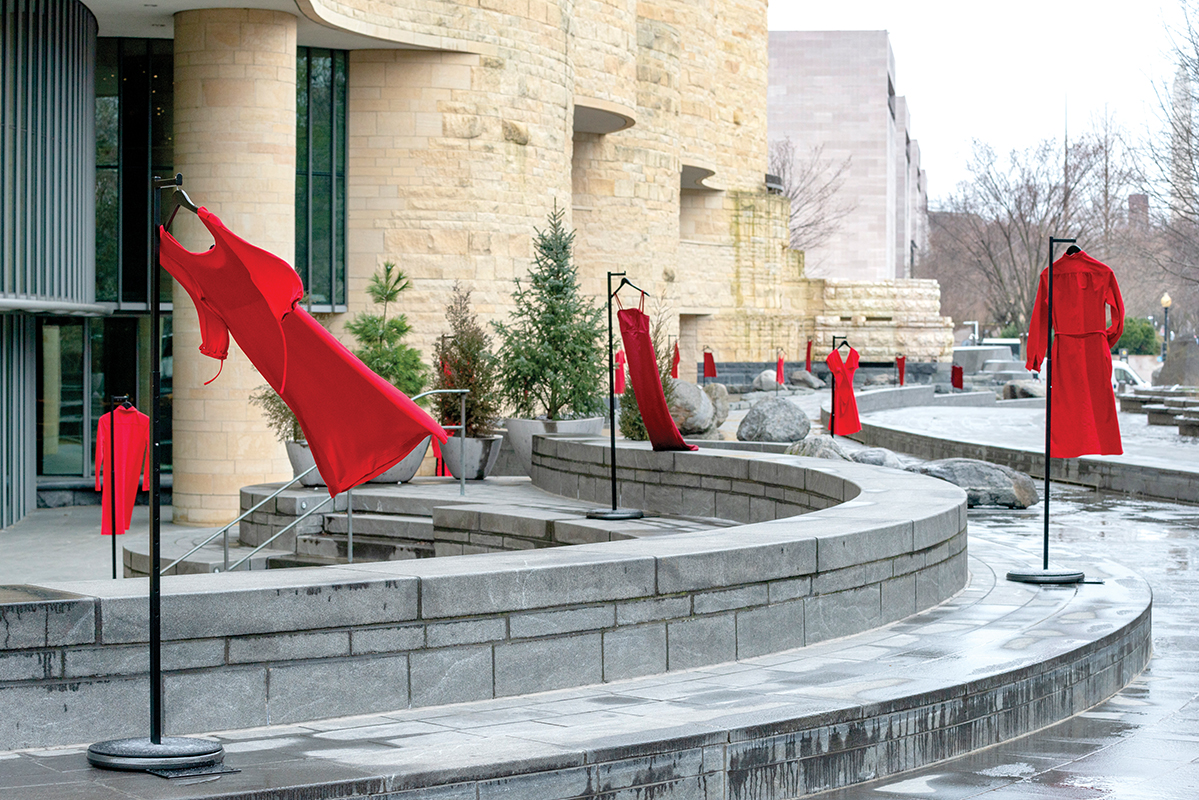 In commemoration of Women’s History Month, the National Museum of the American Indian presents an outdoor art installation by Canadian/Métis multidisciplinary artist Jaime Black on view in the U.S. for the first time. In The REDress Project, several empty red dresses hang along the Riverwalk, located in the museum’s Native landscape, symbolizing missing or murdered indigenous women, in an effort to draw attention to the gendered and racialized nature of violent crimes against Native women. Collected through community donation, the dresses have been installed at several Canadian galleries and colleges since 2011. To March 31. Independence Avenue at 4th Street SW. Call 202-633-1000 or visit www.nmai.si.edu. 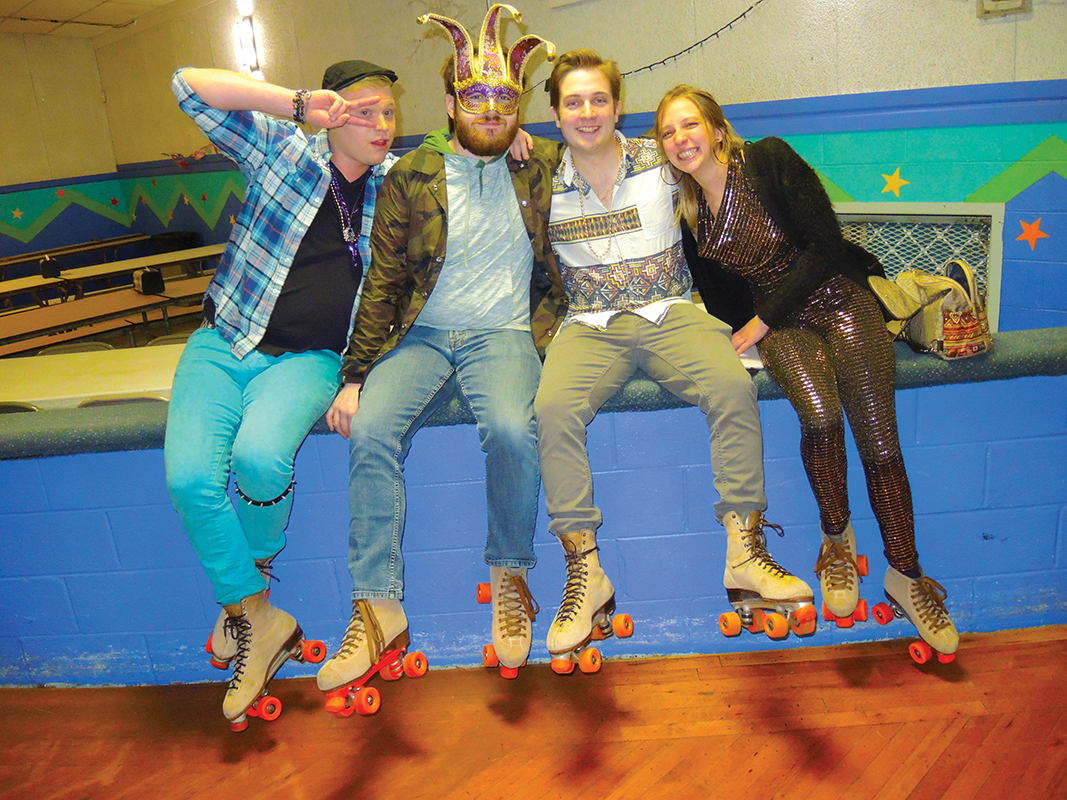 So what if the named Irish holiday will be a faded, week-old memory by the time Monday Night Skating rolls around? After all, being green isn’t easy — and it rarely comes and goes in a mere day (holy or otherwise). Nor is it only ever sad or sullen. In fact, as a certain green sage once put it in song, green is the color of Spring, and green can (also) be cool and friendly-like. And when surrounded by kindred spirits and — literally — rotating around all the many colorful members of the queer Rainbow Connection, well, you’ll likely be green mostly in attire only. Said to be “the gayest skate a Monday night can have and the most fun on eight wheels,” MNSkating is a longstanding LGBTQ roller-skating tradition held the last Monday of every month in Maryland. It includes couples/trios skating, limbo, conga line, and other fun games — “Ghostbusters Mayhem,” say — that are nothing to be afraid of. There’s also a charity-benefiting 50/50 Raffle and a Door Prize of a 90-minute massage courtesy of Metro Weekly photographer/professional masseuse Ward Morrison. Just don’t go in dreaming of green beer, or of imbibing a spirit of any kind — the Laurel Roller Skating Center is a dry venue. Monday, March 25, starting at 7:30 p.m. 9890 Brewers Ct., Laurel. General admission is $7 to $8.50, plus $4 for skate rental. Call 301-725-8070 or visit www.MondayNightSkating.com.