Jordan Peele's Us may deliver the scares on a bloody platter, but it amounts to so much more than a simple horror film 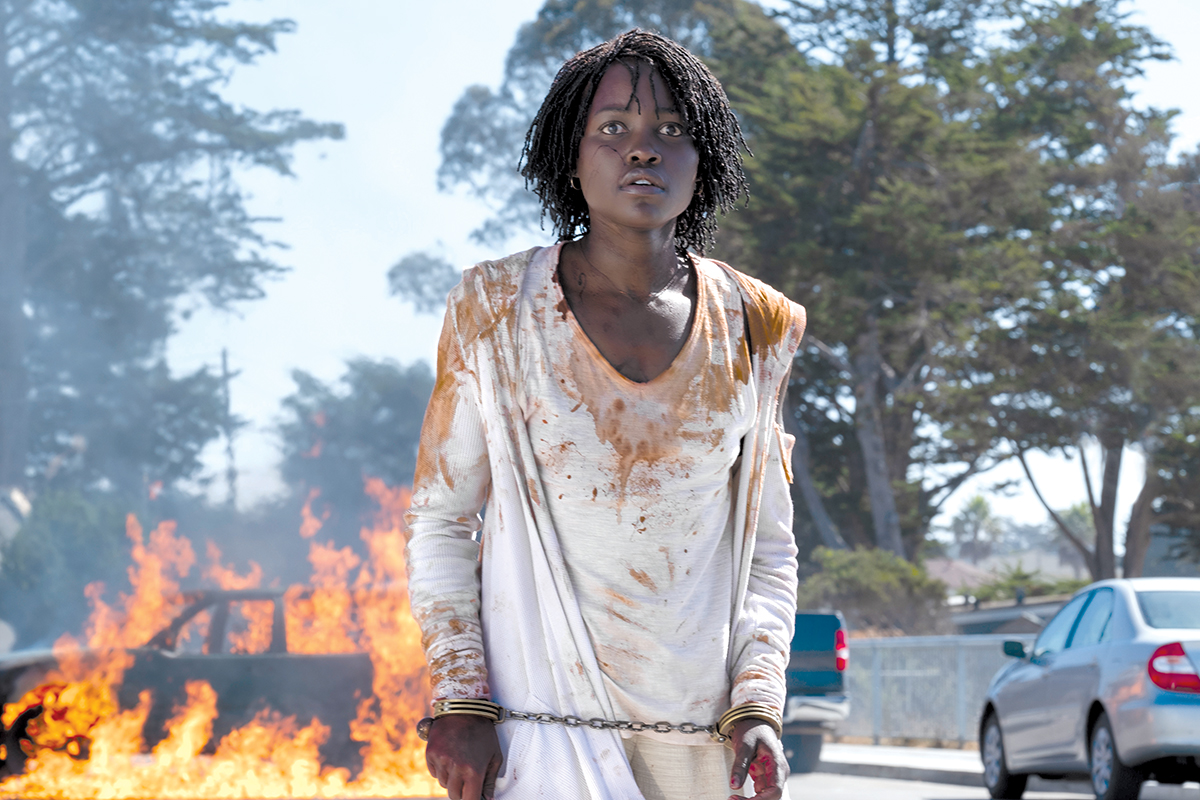 Lupita Nyong’o in “Us”

Warning: Do not watch the trailers for Us. Even if you’ve seen them in passing leading up to opening weekend — and, let’s face it, they’re inescapable — it turns out they contain a moment that, quite frankly, I’m flabbergasted director Jordan Peele let get through. But maybe he doesn’t have final say on how studio marketing divisions sell his films. Regardless, the anticipation is high because of that very brilliant marketing campaign. Audiences are primed to be scared senseless by Peele and company.

If Us (★★★★★) doesn’t quite scare you senseless, it’s still plenty terrifying. More to the point, it seems to be Peele’s way of telling society to come to its senses before it’s too late. It layers on allegory after allegory until they’re piled high. And while some work, a few miss their (presumably) intended target. Still, Us packs a quadruple punch: it’s scary, troubling, thought-provoking, and vastly, vastly entertaining. Why can’t every movie be like Us?

Admittedly, the lead up is probably more anxiety-producing than the final product. Yet, as with his breathtaking debut feature, Get Out, Peele has more on his mind than to merely offer up a scary ride. His films burst with ambition. He won’t settle for less, and he wants his audiences to do more than scream. He wants them to think, debate, question. He wants them engaged on every possible level. Most importantly, he wants his horror films to mean something, he wants them to resonate — as they did back in the glory days of The Birds, Rosemary’s Baby, and The Exorcist, back before the genre was hijacked by routine slashers and hackers. The evil in Us is more than just an immortal lunatic in a mask trying to even a score with a wacky, old, rifle-toting family member. It is the family member. Or, as one character quietly puts it, “It’s us.”

The movie’s premise is by now well-established: A family of four on vacation are terrorized by another family of four who look, but don’t quite act, exactly like them. These doppelgangers — soulless, feral, and scissor-wielding — call themselves “The Tethered,” and they’ve come to “untether” themselves of their earthbound others who, in some supernatural way, control their lives, their movements, their destinies. Let the violent games begin.

Lupita Nyong’o in “Us”

Of the four, only one, Red (Lupita Nyong’o) can speak, and only in an achingly strained, raspily halting voice. When Adelaide Wilson (also Nyong’o) asks “Who are you people,” Red declares “We are Americans.” It gets a laugh, but there’s a far deeper meaning to that statement that doesn’t become fully clear until we’ve seen film’s final, dread-inducing shot.

Get Out dealt pretty much with racism, and veered more toward satire than full-on horror, but Peele is now edging the other way. He’s ready to test his ability to terrify. The Wilson family — Adelaide, Gabe (Winston Duke), Zora (Shahadi Wright Joseph) and Jason (Evan Alex) — and their tormentors may be African-American, but Peele has even bigger things on his mind than racial relations. He’s aiming more broadly here, firing at society-at-large, in particular, the divide — arguably caused by the rich, the Republican Party, the xenophobic, and the intolerant, all exacerbated by President Trump — tearing this country apart. The film is dense with allusions to the sociological troubles currently plaguing our country — the “haves” and “have nots,” the sensationalization of mass murders — but it also takes a dip into a pool of sci-fi gloomery, the kind that reminds us that experiments aren’t always conducted for the greater good. 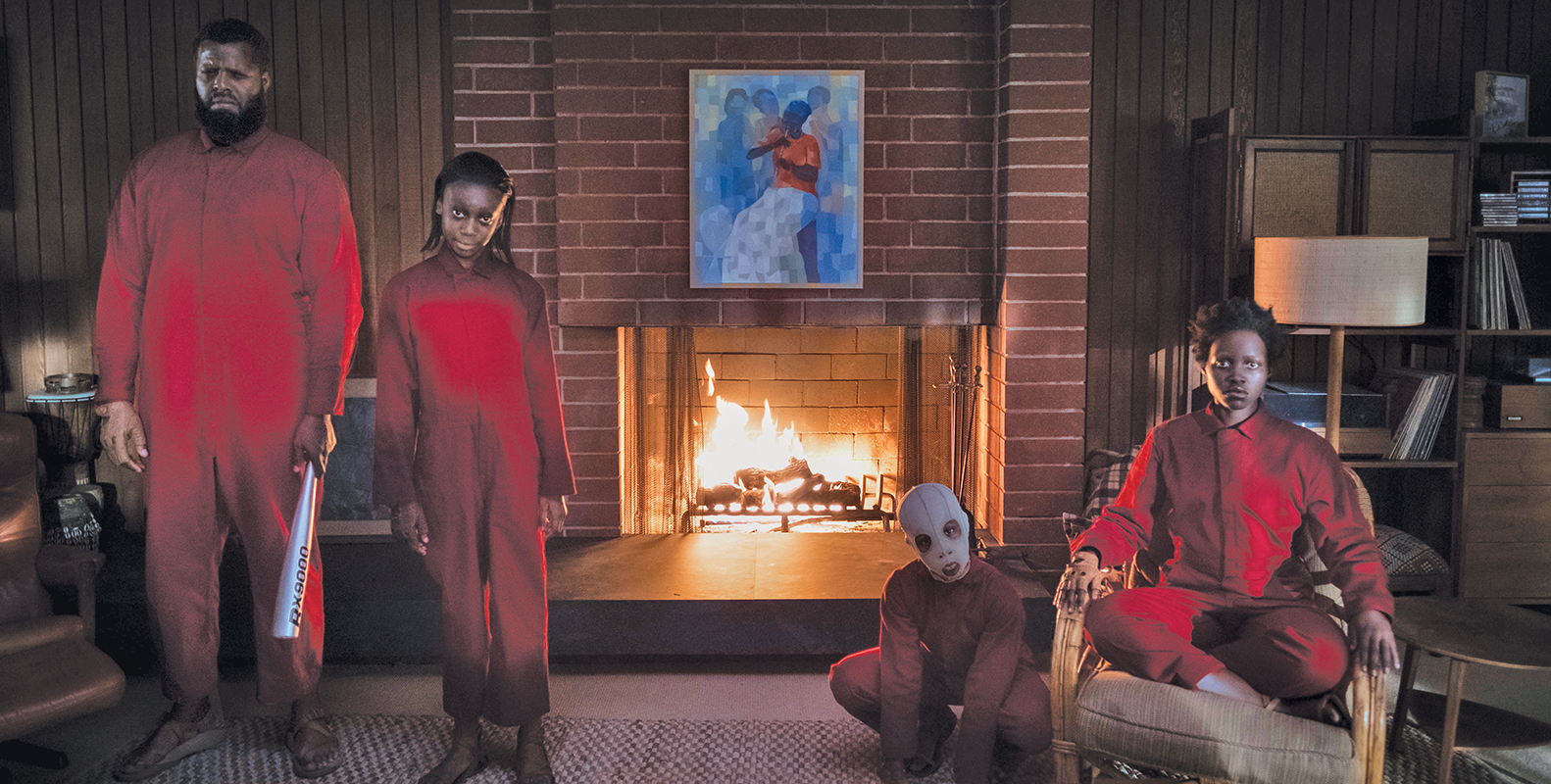 Peele’s imagination is clearly firing on overdrive, and he takes a cue from Hitchcock’s The Birds by refusing to provide clear answers to every little detail, even though several aspects of Us, in retrospect, make absolutely no sense at all. Still, the film’s themes get under your skin, and its logic haunts you like few others in recent memory. Which is box office mojo in the making. Audiences are going to quickly go back for second and third helpings of Us to decipher its true meaning. (Here’s a hint: start with Jeremiah 11:11.)

Us is more frightening than Get Out, and contains a fair share of sudden jump scares and jolts, rousting the audience into wholly expected and supremely satisfying wild frenzies. But Peele is careful never to make things so terrifying that they become unbearable. (This is no Hostel, thank God.) That said, a scene between Zora and her double, Umbrae, set in an empty car, is pure, visceral thrill, and a dance-like fight between Adelaide and Red, perfectly set to Michael Abels’ stunning score, is heartstopping in its perfection. Peele injects enough humor to balance out the scares, and, like most contemporary directors, finds ingenious ways to reference other films that clearly had an influence on him, notably Jaws.

Enough can’t be said about the performances, particularly Nyong’o, whose Adelaide at first seems classic protective mother tiger but evolves into something more. Her Red, meanwhile, is a masterpiece of dreadfulness and originality. She’s like a shudder come to life. It’s a performance bourne out of deep pain and suffering, out of revenge and vengeance, out of extreme darkness. It’s like peering into madness, but a lucid kind of madness, one with an insidious, fully cogent purpose.

Duke offers much needed comic relief, and both Joseph and Alex are excellent. Tim Heidecker and Elisabeth Moss fill in with somewhat smaller — yet no less significant — roles, with Moss, in particular, rising to the challenge when the story demands. You don’t hire Moss and expect her to not have a huge moment. When it comes, offset by a window reflection, it reminds us of why she is among our greatest living actors.

Peele is about to unveil a new version of Rod Serling’s classic The Twilight Zone on CBS All Access. Us feels like a preamble to the series — giving us a taste of hopefully mind-bending, supernatural swirls to come. But it’s demeaning to call Us a simple horror film and Peele a horror movie director. It’s clear, with this second outing, that Peele is in the process of inventing a whole new genre all by himself. He’s determined that we get something out of the scary movies we so eagerly flock to. He’s determined to give us more than a good primal scream. He’s determined to make us use our brains. So far, he’s doing a pretty damn good job of it.

Us is Rated R for violence and terror, and opens nationwide in area theaters on Friday, March 22. Visit www.fandango.com.

Us by Jordan Peele