More than 160 major companies announce support for the Equality Act 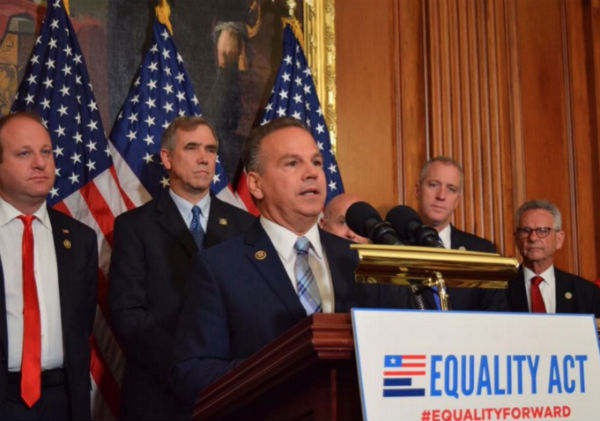 On Friday, the Human Rights Campaign announced it had organized a coalition of 161 leading businesses that support for the Equality Act, a piece of federal legislation that would codify protections for LGBTQ people into law.

The coalition announcement comes less than a week before Democratic leaders in Congress are expected to introduce the bipartisan bill, which would expressly prohibit discrimination based on a person’s sexual orientation or gender identity in employment, housing, credit, and public accommodations.

Currently, 50% of LGBTQ Americans live in the 30 states that lack a comprehensive statewide nondiscrimination law that protects LGBTQ people. LGBTQ advocates have attempted to engage the business community and have prominent companies — many of whom already have pro-LGBTQ employee policies in place — place pressure on members of Congress to pass the law.

“The more than 160 leading American companies that have joined HRC’s Business Coalition for the Equality Act are sending a loud and clear message that the time has come for full federal equality,” HRC President Chad Griffin said in a statement. “By standing with the LGBTQ community and joining the fight to pass the Equality Act, these companies are demanding full federal equality for the more than 11 million LGBTQ people in this country who deserve to earn a living, raise their families and live their lives free from discrimination.

“These leading employers know that protecting their employees and customers from discrimination isn’t just the right thing to do — it’s also good for business,” Griffin added.

Taken together, the companies announcing their support for the legislation have operations in all 50 states, generate more than $3.7 trillion in revenue, and employ more than 8.5 million employees across the United States.

“At the Hershey Company we recognize that our talented employees are our business edge, and that retaining our place as the market leader in our category requires the best talent,” Kevin Walling, chief human resources officer at The Hershey Company. “To help us achieve our goal of recruiting the nation’s top employees, we know that we must foster a business culture that is welcoming to all, regardless of sexual orientation, or gender, or race, or other status. By the same token, if our nation is to compete on a global stage, our federal laws must ensure that all employees are treated with the same respect.”

“At Kellogg, we firmly believe in diversity, equality and inclusion in the workplace, marketplace and in the communities where we work and live,” Mark King, the global head of diversity and inclusion at Kellogg Co., said in a statement. “Supporting the Equality Act demonstrates our continued commitment to creating an environment in which all employees are included, treated with dignity and respect, and are empowered to achieve their full potential.”

Beyond support from the business community, most Americans are largely supportive of the concept of expanding the nation’s nondiscrimination laws. A recent survey by the Public Religion Research Institute found that more than 7 in 10 Americans claim to support laws that protect LGBTQ people from discrimination, although the public continues to be divided as to whether there should be religious exemptions for some business owners.

In addition, post-election polling from the Human Rights Campaign found that 60%in the 2018 midterms opposed the Trump-Pence administration’s reported plans to define gender entirely by sex assigned at birth, which would effectively erase recognition of transgender people when it comes to civil rights laws. That is significant because the last time the U.S. House of Representatives voted on an LGBTQ nondiscrimination bill under the Bush administration, protections for transgender individuals were excluded.

“As one of the world’s leading innovators with more than 165 years of life-changing inventions, we know how important it is to foster an environment where every individual is treated with dignity and respect,” Christy Pambianchi, the executive vice president of Corning Inc., said in a statement. “Consistent with Corning’s values, we believe in equal treatment for all employees regardless of sexual orientation and gender identity. LGBTQ people are our innovators, our friends, our family members, and our neighbors, and they deserve to be able to live their lives free from discrimination or harassment.”

John Riley is the local news reporter for Metro Weekly. He can be reached at jriley@metroweekly.com
← Previous Story Maryland court lifts injunction on Trump’s transgender military ban
Next Story → Marvel executive: “The world is ready” for a gay superhero