Home / Arts + Entertainment / Stage / Theater Review: ‘Into the Woods’ at Ford’s hits all the right notes

Theater Review: ‘Into the Woods’ at Ford’s hits all the right notes

Ford's production offers everything, from dazzling design and soaring voices to a heartwarming cow 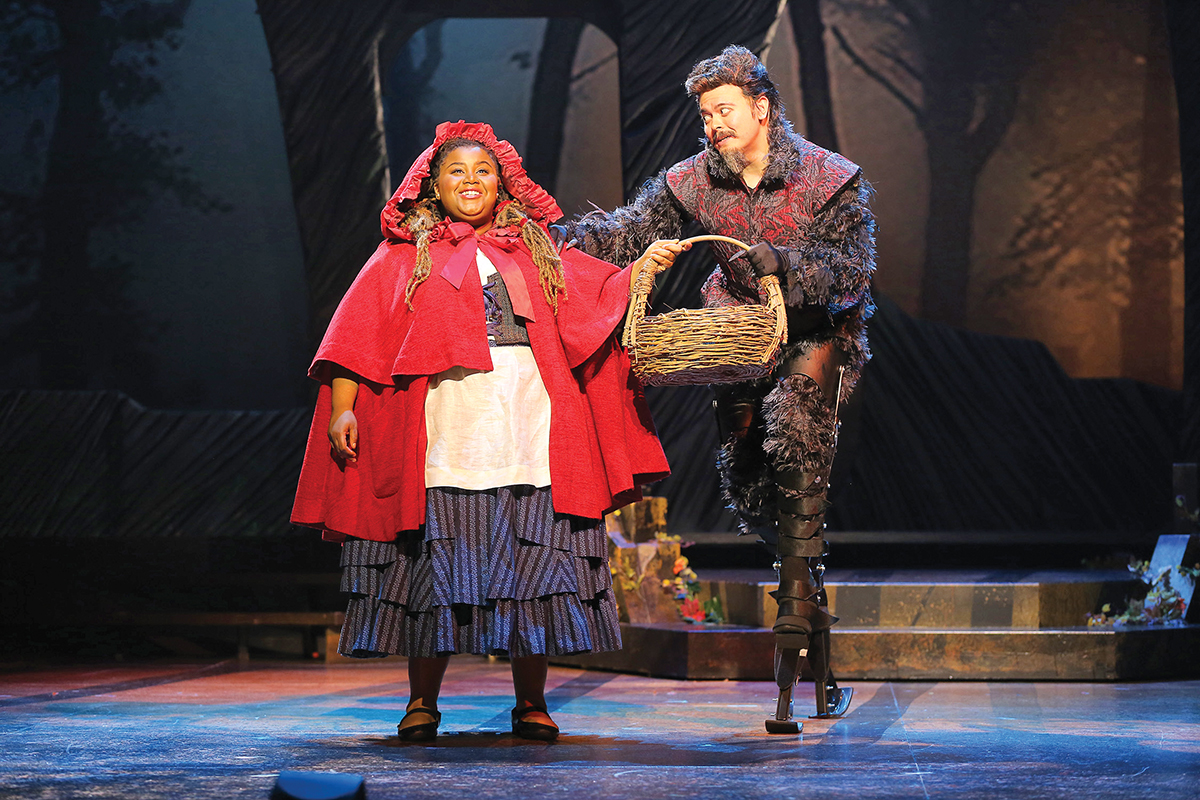 Into the Woods at Ford’s Theatre — Photo: Carol Rosegg

Somebody’s hauled a fabulous eight-piece orchestra into the enchanted forest of Ford’s new production of Stephen Sondheim’s Into the Woods (★★★★), and the brilliant, Tony-winning score, conducted by music director William Yanesh sounds great.

The songs, including the title tune, might not wield the phantom pull of the familiar, but the rolling melodies and canny lyrics compensate. And the mostly sharp delivery of director Peter Flynn’s talented cast can keep the listener hanging on every word of Sondheim’s winding lines.

The characters, derived from fairy tales, are plenty familiar to just about anyone over the age of four. Sondheim and frequent book writer James Lapine send Cinderella (Erin Driscoll), Little Red Ridinghood (Jade Jones), and Rapunzel (Quynh-My Luu) into the forest, and Jack (Samy Nour Younes) up his beanstalk, to frolic with giants, and princes, and big bad wolves. These are treacherous woods, less an idyll for peaceful strolls to grandma’s house than a fateful crossroads of change. Milagro Ponce de León’s forest set, rippling layers of flattish trees and vines, definitely carries through the creators’ image of the woods as a foreboding place and time, a field of dark unknowing. That looming danger might be anything, but it’s a hazard that must be crossed by every innocent in the story, including the Baker (Evan Casey) and his Wife (Awa Sal Secka), who venture into the woods to seek items that might break a curse set upon their house by a vengeful Witch (Rachel Zampelli).

Flynn and company do a marvelous job delineating every major and minor character in this vast storybook population of kings, commoners, cows and chickens, even with some actors performing several roles. But let’s start with the cow, Jack’s beloved bovine Milky White, rendered in a warmly expressive performance by Tiziano D’Affuso, aided by simple but effective costume design by Wade Laboissonniere. The costumes take on more lush and elaborate form for the likes of the Witch and Rapunzel and the Wolves (Christopher Mueller and Hasani Allen), who dog Red Ridinghood’s path on her way to see Granny (Karen Vincent).

The elaborate make-up works wonders, too, especially in the case of Zampelli’s Witch, whose surface appearance transforms dramatically, although throughout, the villainess retains the power of Zampelli’s zestful voice and charisma.

A powerful voice and charisma come wrapped in a blood-red cape with Jade Jones’ Red Ridinghood, an appealing mix of wide-eyed fawn and tough cookie. Jones presents not the most nuanced reading of the character, but she connects exceedingly well to everyone she encounters onstage, and in turn with the audience. Similarly, Milky White’s robust rapport with practically everyone, not just Jack, adds heart to the overall mood of fear and gloom that grips all who enter the woods.

Gloom hangs heavily over the cursed Baker and his wife, but their love sustains them through all manner of trials. Casey and Secka, whether Baker and Wife are arguing, or singing of sweet togetherness in “It Takes Two,” create a sympathetic pair who in the midst of mayhem and mystery seem grounded in the reality of genuine human need, longing, and loss. Casey, not the strongest singer, limns a solidly comic Baker, and Secka, fantastic in Signature Theatre’s recent Judy Garland tribute cabaret, simply sounds lovely always.

Secka, Casey, Zampelli, and Jones receive winning support from Mueller and Allen, wonderfully pompous as the one-upping princes; from Vincent in a variety of roles, including Cinderella’s mother; and Scott Sedar as both the show’s sly Narrator and the Mysterious Man who march us through the sometimes harrowing tale.

Flynn’s absorbing staging marches with gusto into the second act, which examines, or pokes holes in, the contentment that comes after Happily Ever After. But the show hits a few roadblocks. The pace slackens, and the fire wanes, until a hardy finish. Of Michael Bobbitt’s choreography, there seems to be not much of it. It’s the incidental movement, be it choreographed or ad-libbed, that’s more arresting — the flounce of a skirt, or a frightened double take, or the ridiculous bounding of the princes over bushes and branches.

Sometimes it’s the small details that delight the most. But, as a whole, Ford’s production beautifully conveys the weight and lightness of Sondheim and Lapine’s journey into the woods, where

characters forced to coerce, deceive, or steal from strangers can find whatever they believe might bring them happiness.

Into the Woods at Ford's Theatre

André Hereford covers arts and entertainment for Metro Weekly. He can be reached at ahereford@metroweekly.com. Follow him on Twitter at @here4andre.
← Previous Story Theater Review: ‘Masterpieces of the Oral and Intangible’ at Signature Theatre
Next Story → Theater Review: Aaron Posner’s ‘JQA’ at Arena