In a rare moment of transparency, DeVos said that she knew revoking protections for transgender students would impact their mental health 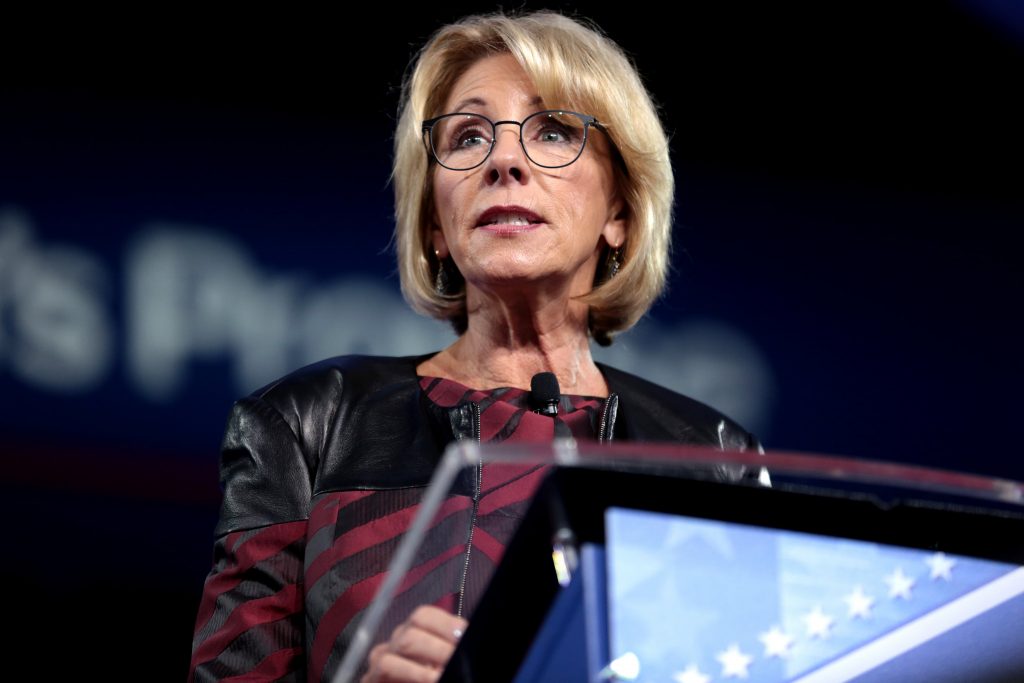 Education Secretary Betsy DeVos has admitted that she knew her departments actions against transgender students could directly impact their mental health and wellbeing.

Appearing before the House Education and Labor Committee, the usually evasive and opaque DeVos was pressed to directly answer a question from Civil Rights Subcommittee Chairwoman Suzanne Bonamici (D-Oreg.).

Rep. Bonamici wanted to know if DeVos knew that rolling back President Obama-era guidelines preventing discrimination in schools based on gender identity would put transgender students in danger.

“When you rolled back that guidance, did you know that the stress of harassment and discrimination can lead to lower attendance and grades as well as depression and anxiety for transgender students?,” Bonamici asked. “Did you know that?”

DeVos tried to dodge the question, saying that the Office of Civil Rights is “committed to ensuring all students have access to an education free from discrimination.”

However, Bonamici stopped DeVos and pushed for a direct answer.

“I would really like an answer. Students and families need to know this,” she said. “We had a mother of a transgender student here yesterday. We need to know this. Did you know when you rolled back the guidance that the stress of harassment and discrimination can lead to lower attendance and grades as well as depression for transgender students? Did you know that when you rolled back the guidance?”

“I do know that,” DeVos responded.

She then reiterated her line about OCR’s commitments to all students.

Bonamici then asked DeVos if she was aware of the high rates of attempted suicide among transgender youth.

“When you rolled back the guidance,” she asked, “did you know that a study recently published by the american academy of pediatrics revealed alarming levels of  attempted suicide among transgender youth?”

DeVos responded: “I am aware of that data.”

Bonamici replied by saying she was “extremely concerned…about the rollback of that guidance.”

.@RepBonamici: "Did you know when you rolled back the guidance that the stress of harassment and discrimination can lead to lower attendance and grades as well as depression for transgender students?"

Secretary @BetsyDeVosED: "I do know that." pic.twitter.com/nEMvk2sFUQ

DeVos — working alongside then-Attorney General Jeff Sessions — originally rescinded the Obama-era guidance in February 2017, not long after assuming her role.

DeVos was also heavily criticized for suggesting that states should have the freedom to craft their own policies on whether schools that may choose to actively discriminate against LGBTQ students, such as religiously-affiliated institutions or public charter schools, can continue to receive federal taxpayer dollars through vouchers or other scholarship programs aimed at providing greater school choice to low-income students.

Appearing before Congress last year, DeVos confirmed that her department would continue to ignore transgender students who have been discriminated against based on their gender identity until either the Supreme Court or Congress changes the law to codify nondiscrimination protections.

And in contrast to her admission this week, last month DeVos refused to answer Rep. Mark Pocan (D-Wis.) when he asked if she opposed discrimination against LGBTQ students.

Referring to comments by DeVos made earlier in the hearing, when she attempted to defend her decision to rescind Obama-era guidance intended to reduce racial disparities when it comes to the frequency and severity of school suspensions, Pocan asked DeVos: “You mentioned race, religion, and I notice you never mentioned sexual orientation or gender identity. Do you think it’s all right for a school to discriminate based on someone’s sexual orientation or gender identity?”

DeVos paused before responding, saying: “We have laws that cover…discriminatory efforts and our office for civil rights has continued to be very diligent in investigating any allegation of discrimination and will continue to do so.”

“We follow the law as this body has defined,” DeVos answered.

Rhuaridh Marr is Metro Weekly's online editor. He can be reached at rmarr@metroweekly.com.
← Previous Story Taylor Swift donated $113,000 to combat anti-LGBTQ hate in Tennessee
Next Story → Mike Pence complains about Pete Buttigieg attacking his homophobia, says he should “know better”