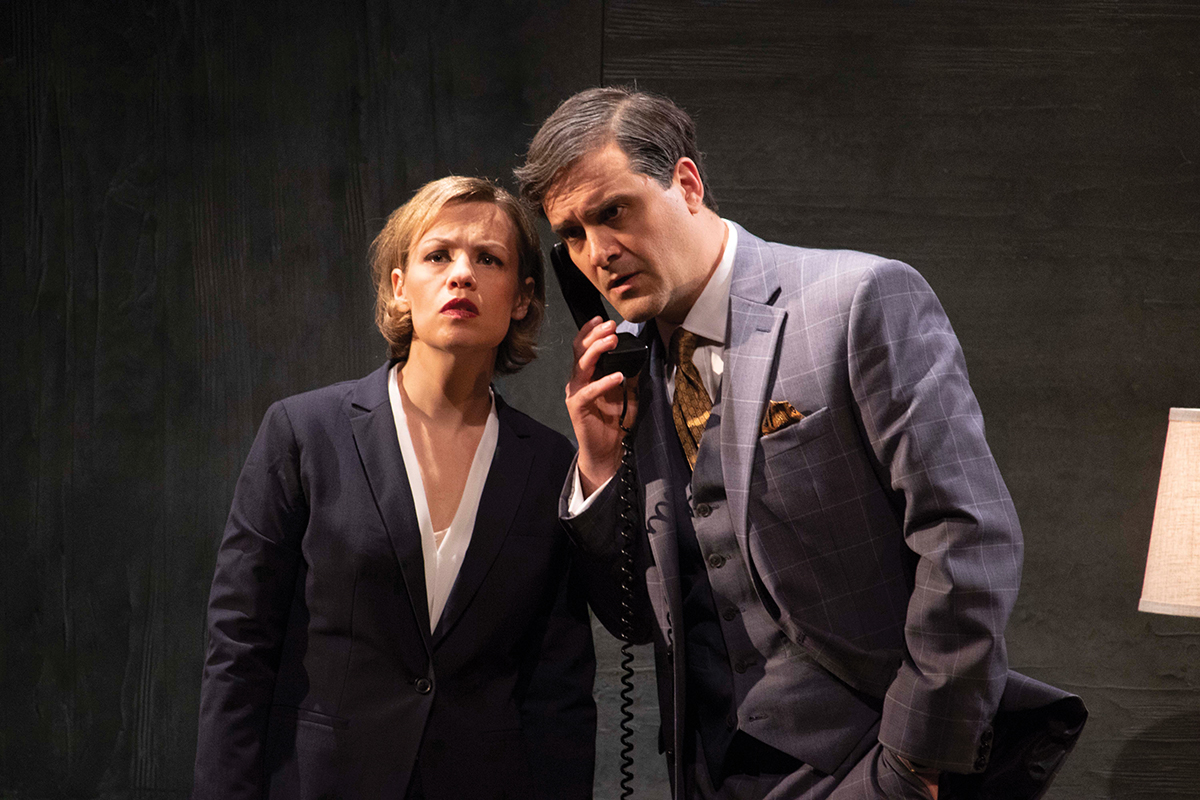 In 1993, a husband-and-wife Norwegian duo assembles a motley band of would-be diplomats from the Middle East to attempt the unimaginable: negotiate peace between Israelis and Palestinians. Round House Theatre’s Ryan Rilette directs J. T. Rogers’ thrilling nail-biter, based on the true events surrounding the Oslo Peace Accords, with Erin Weaver and Cody Nickell (pictured) leading a strong 15-member cast featuring a number of local stage heavyweights, including Maboud Ebrahimzadeh, Kimberly Gilbert, Alexander Strain, John Austin,and Susannah Morgan Eig. The production is presented at the Shakespeare Theatre Company’s Lansburgh Theatre while Round House renovates its Bethesda venue, with its box office transplanted as well. In previews. Runs to May 19. 450 7th St. NW. Call 240-644-1100 or visit www.roundhousetheatre.org. 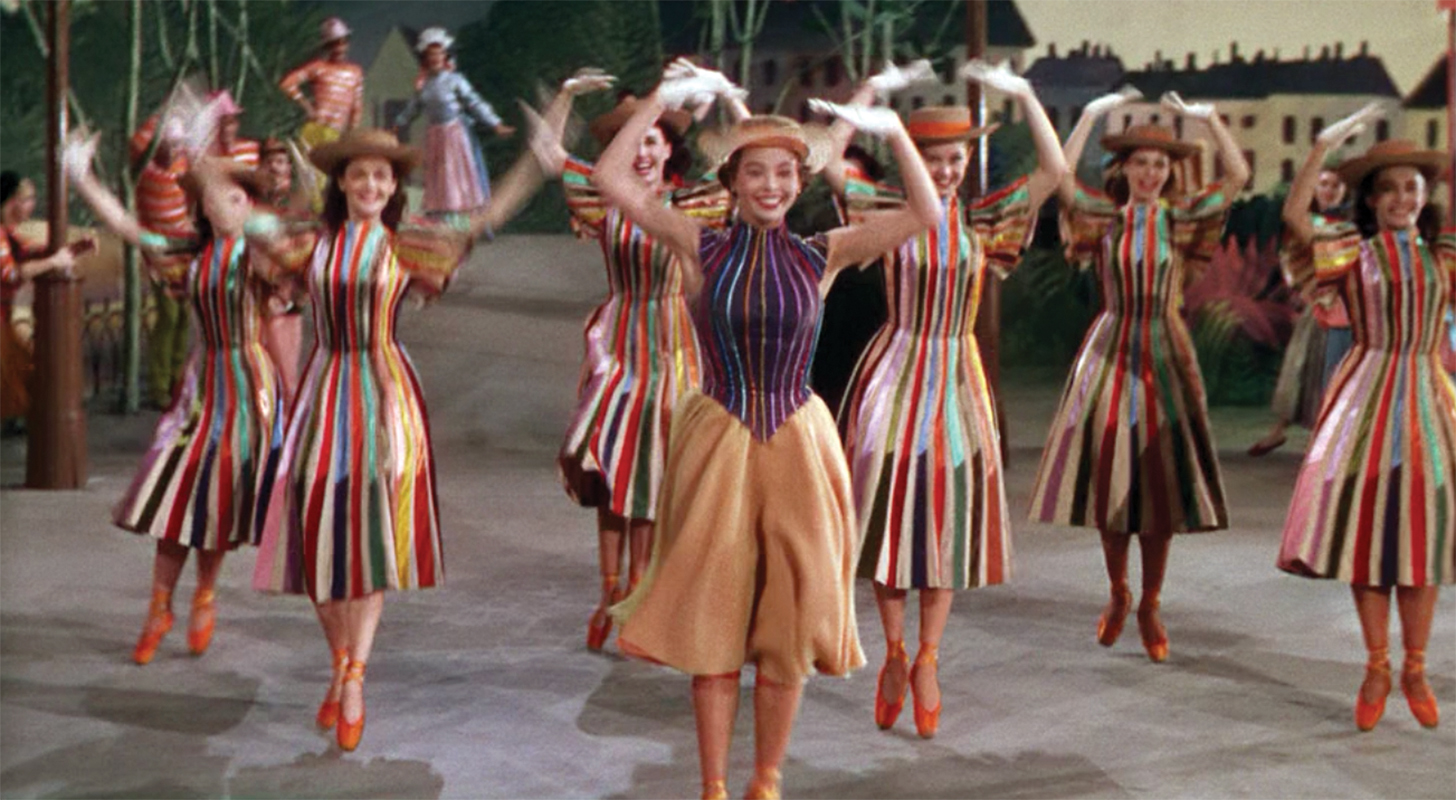 An American In Paris

A “Movie with Orchestra” event, in which the classic 1951 film directed by Vincente “Liza’s Father” Minnelli and featuring Gene Kelly and Leslie Caron is projected on screens overhead as Jack Everly leads the BSO in George Gershwin’s extraordinary film score, including the songbook standards “Embraceable You” and “I Got Rhythm.” Thursday, May 2, at 8 p.m. Music Center at Strathmore, 5301 Tuckerman Lane, North Bethesda. Also Friday, May 3, and Saturday, May 4, at 8 p.m., and Sunday, May 5, at 3 p.m. Joseph Meyerhoff Symphony Hall, 1212 Cathedral St., Baltimore. Tickets are $25 to $90. Call 410-783-8000 or visit www.bsomusic.org. 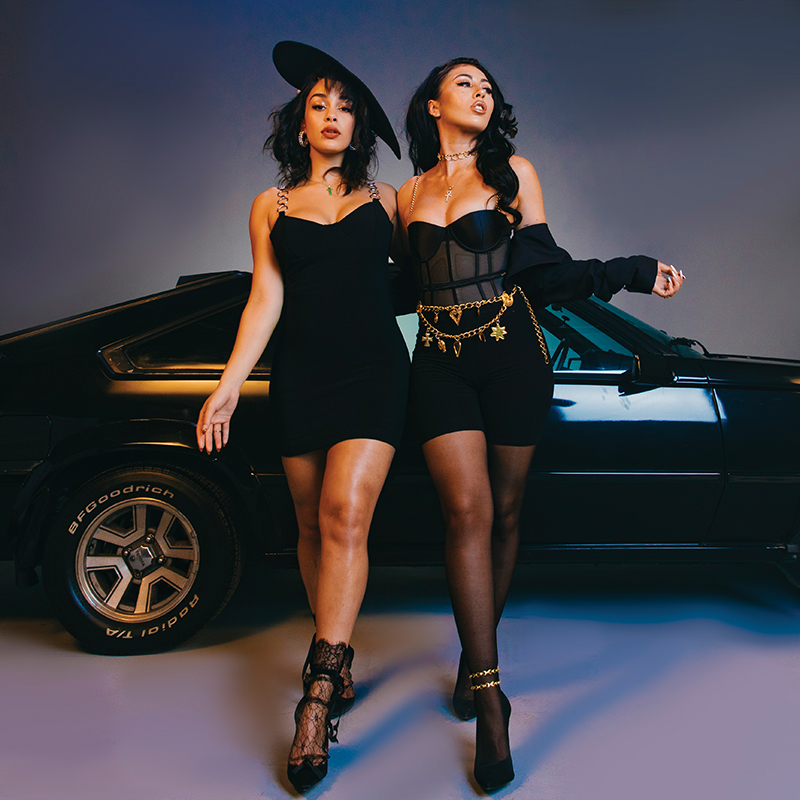 A double-bill of new-school R&B from two Millennial starlets, the Northern Virginia-reared Uchis and the Jamaican-English Smith. Uchis, of Colombian descent, tours in support of Isolation, characterized by a savvy mix of R&B with reggaeton, funk, and bossa nova elements and praised by media outlets including NPR as “one of the most commanding and endlessly listenable pop statements to emerge” in 2018. Smith earned some acclaim of her own last year upon the release of her debut long player Lost & Found, which helped her land a nomination as Best New Artist at the Grammys. Sunday, April 28. Doors at 6:30 p.m. The Anthem, 901 Wharf St. SW. Tickets are $45 to $75. Call 202-888-0020 or visit www.theanthemdc.com. 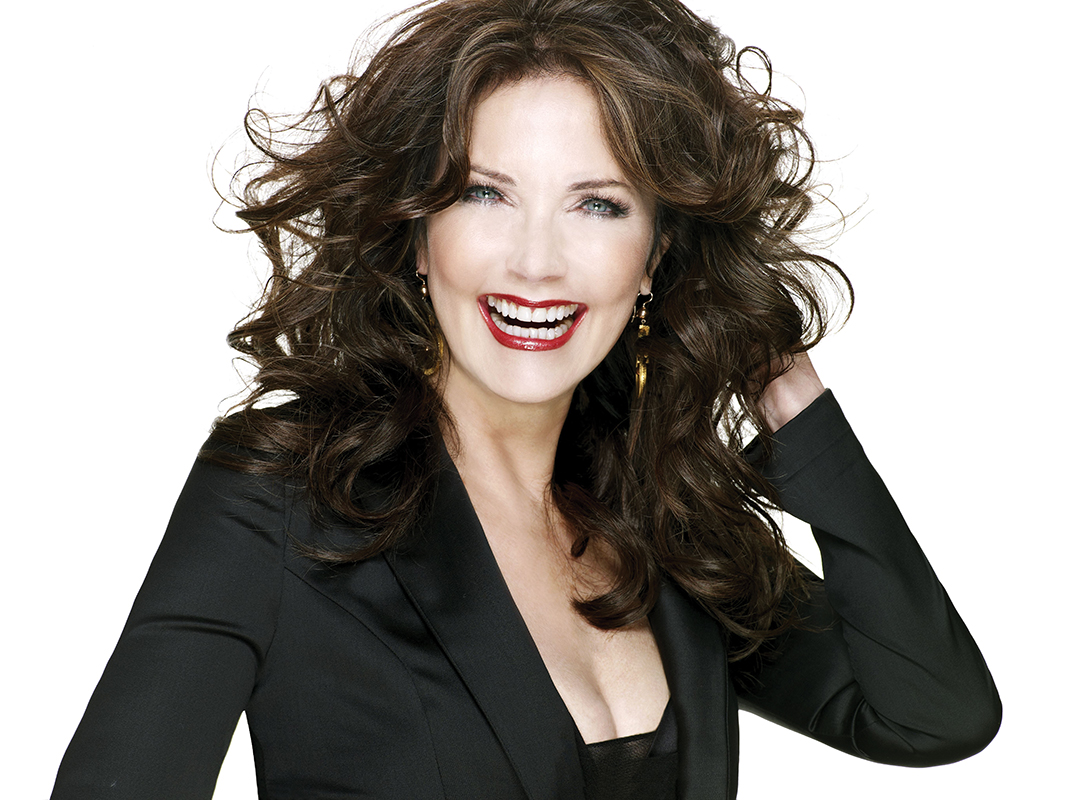 The original Wonder Woman has developed a second career as a cabaret/jazz singer in recent years, and appearing at the Kennedy Center has become an annual pilgrimage of sorts. “It’s a thrill to come back every year,” she tells Metro Weekly. “There’s a mix of old material and new material.” Much of the new material in “This Life: My Music, My Story” hails from her most recent album, 2018’s Red Rock N’ Blues. Carter will be accompanied by her band for a dynamic, sexy, 90-minute cabaret also including classic standards in the jazz, country, and blues genres. Sunday, April 28, at 7:30 p.m. Kennedy Center Terrace Theater. Tickets are $65 to $120. Call 202-467-4600 or visit www.kennedy-center.org. 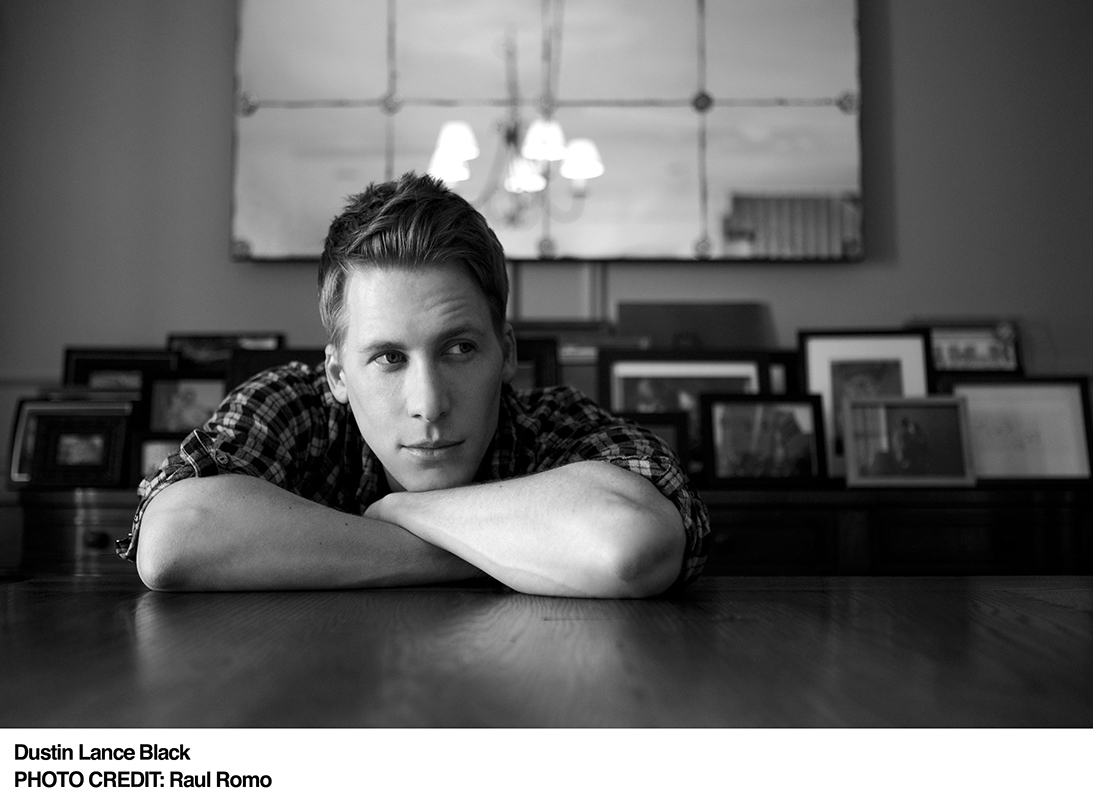 Next week, Knopf will publish Mama’s Boy: A Story from Our Americas, a stirring memoir from the Oscar-winning screenwriter of Milk who also helped lead the fight a decade ago to overturn California’s anti-gay marriage Proposition 8. Above all, Black’s behind-the-scenes look into his life, work, and activism shines a light on the woman who most inspired him: His mother, who defied doctors’ expectations as a child survivor of severe polio, went on to break free from two abusive marriages, and eventually chose to support her gay son rather than give in to the anti-gay teachings of her Mormon faith. Thursday, May 2, at 7 p.m. Politics and Prose, 5015 Connecticut Ave. NW. Call 202-364-1919 or visit www.politics-prose.com. 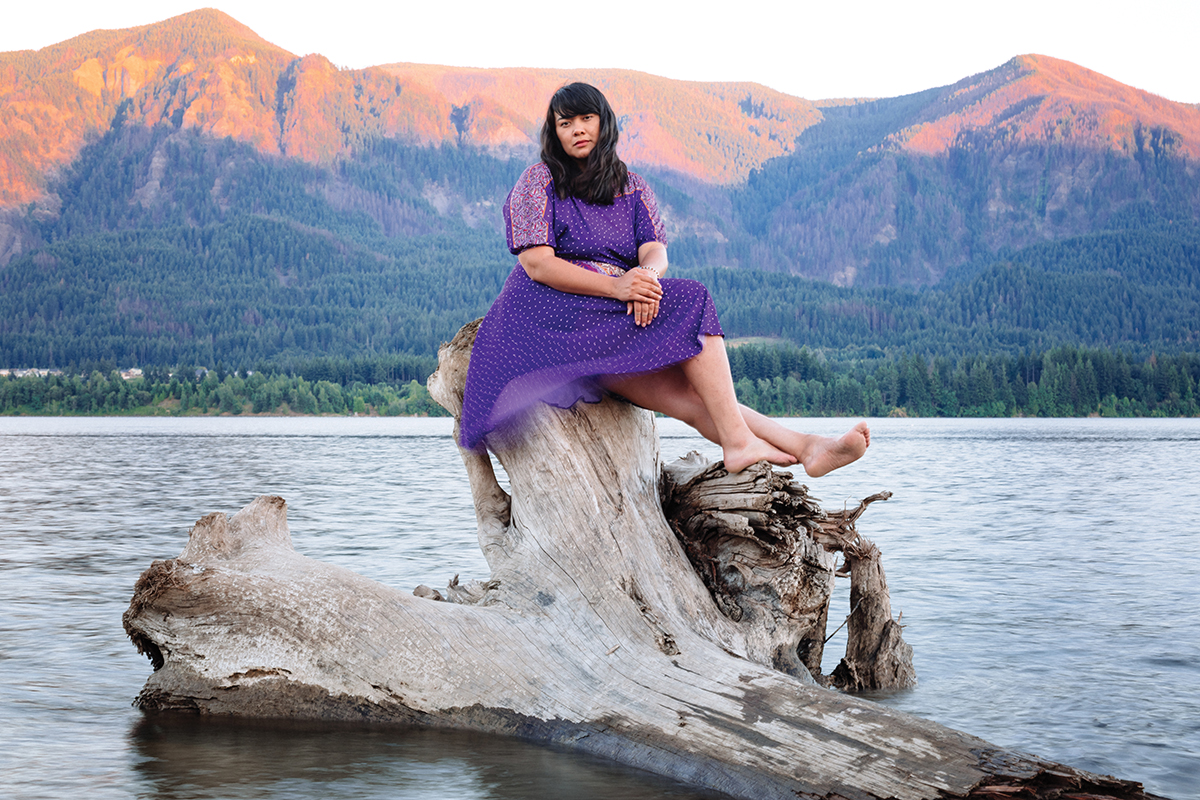 “A friend came up with Black Belt Eagle Scout, actually,” says singer-songwriter Katherine Paul, or KP. “I thought, that’s a really nice name. It’s a very fierce name.” The music that emanates from her twice masterly titled project is also pretty audacious, in a rather quiet, pensive way. The full-length debut Mother Of My Children showcases KP’s multi-varied influences: from her upbringing in a musical family on the Swinomish Indian reservation in Washington state; to her love of the state’s homegrown riot grrl punk and grunge scenes; to her identity as an “Indigenous queer cis woman.” Much of the set focuses on a past relationship with a woman she thought she’d have kids with. “It’s a look into what emotions one goes through when you feel heartbreak, and when you feel grief,” she says, “and then when you try and find that part inside of you to heal and to process.” The 29-year-old is remarkably candid about her experiences throughout the reflective set — with standouts including the bristly grunge-esque rocker “Soft Stud,” where KP conveys angst over having an open relationship, and the title track, where she coos the phrase “without you” wistfully yet repeatedly, as if to hammer home the point. In concert, KP sings and plays guitar as part of a four-piece band working in tandem to make the songs sound “a little bit more full live.” Black Belt Eagle Scout also serves as the warm-up for young Australian folk-rock singer-songwriter Julia Jacklin. Tuesday, April 30. Doors at 7 p.m. Rock and Roll Hotel, 1353 H St. NE. Tickets are officially sold out, but available for $17 on resale sites including StubHub and VividSeats. Call 202-388-ROCK or visit www.rockandrollhoteldc.com. (Doug Rule) 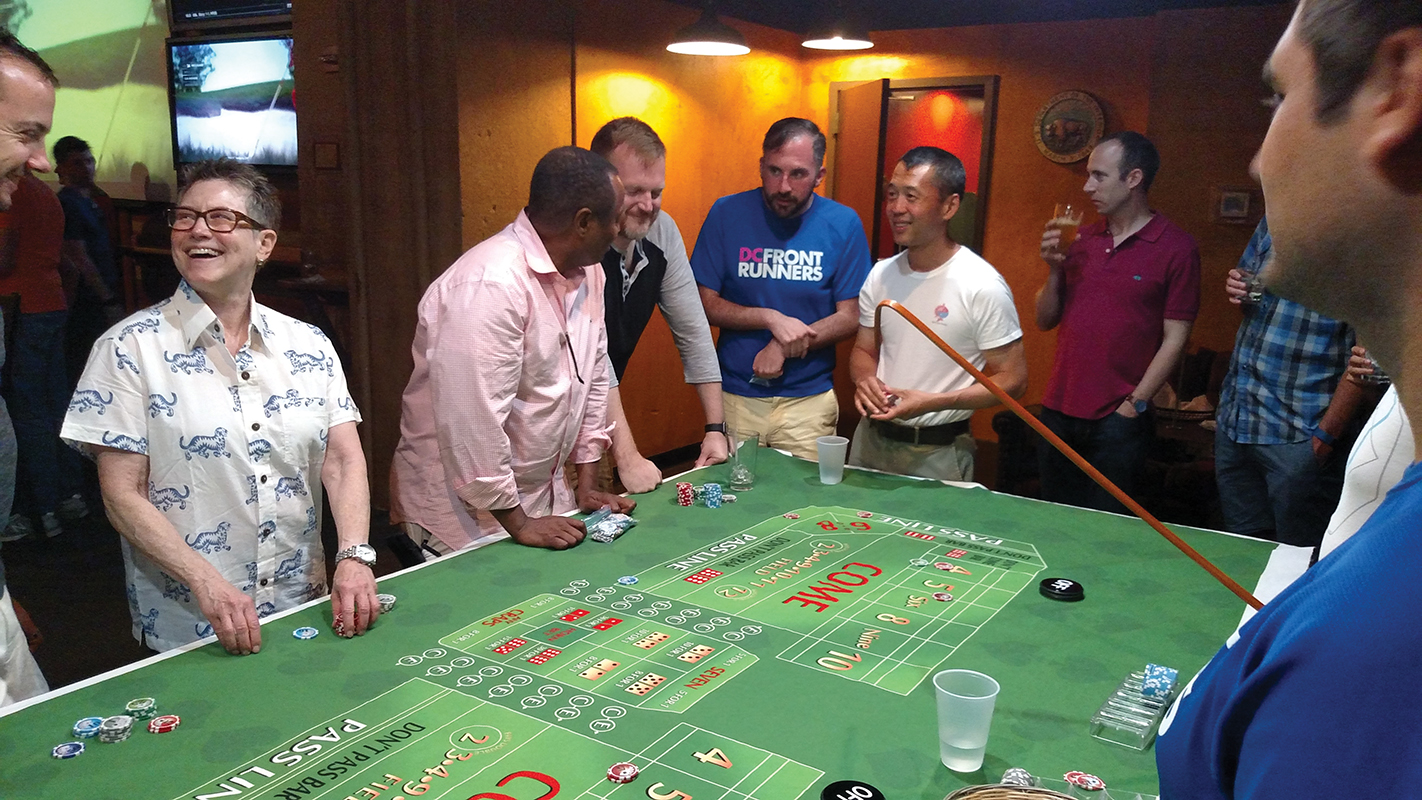 Local LGBTQ athletic-supporting and social sports-boosting outfit Team DC offers gambling-for-fun fundraising events several times a year that benefit a rotating roster of local sports teams and social organizations, whose members serve as croupiers at tables offering poker, blackjack, and craps. Proceeds from the chips used to play at the tables will be split among the teams, and not, to be clear, among the gambling patrons themselves. That said, a patron’s remaining chips at the end of the night do offer chances for winnings — specifically raffle prizes, including tickets to the theater or sporting events, and gift cards. And even if you don’t win a thing, you also won’t lose a penny beyond the $10 donation for the chips. “Casino Night gives you all of the pleasure and none of the harsh debt that comes with [actual] gambling,” says Team DC’s Brent Minor. The Spring 2019 affair is co-hosted by the Capital Tennis Association, the DC Strokes Rowing Club, DC Different Drummers, and Federal Triangles Soccer Club. There will also be food and drink specials. Saturday, April 27, from 8 p.m. to midnight. Buffalo Billiards, 1330 19th St. NW. Cover donation is $10. Visit www.teamdc.org. 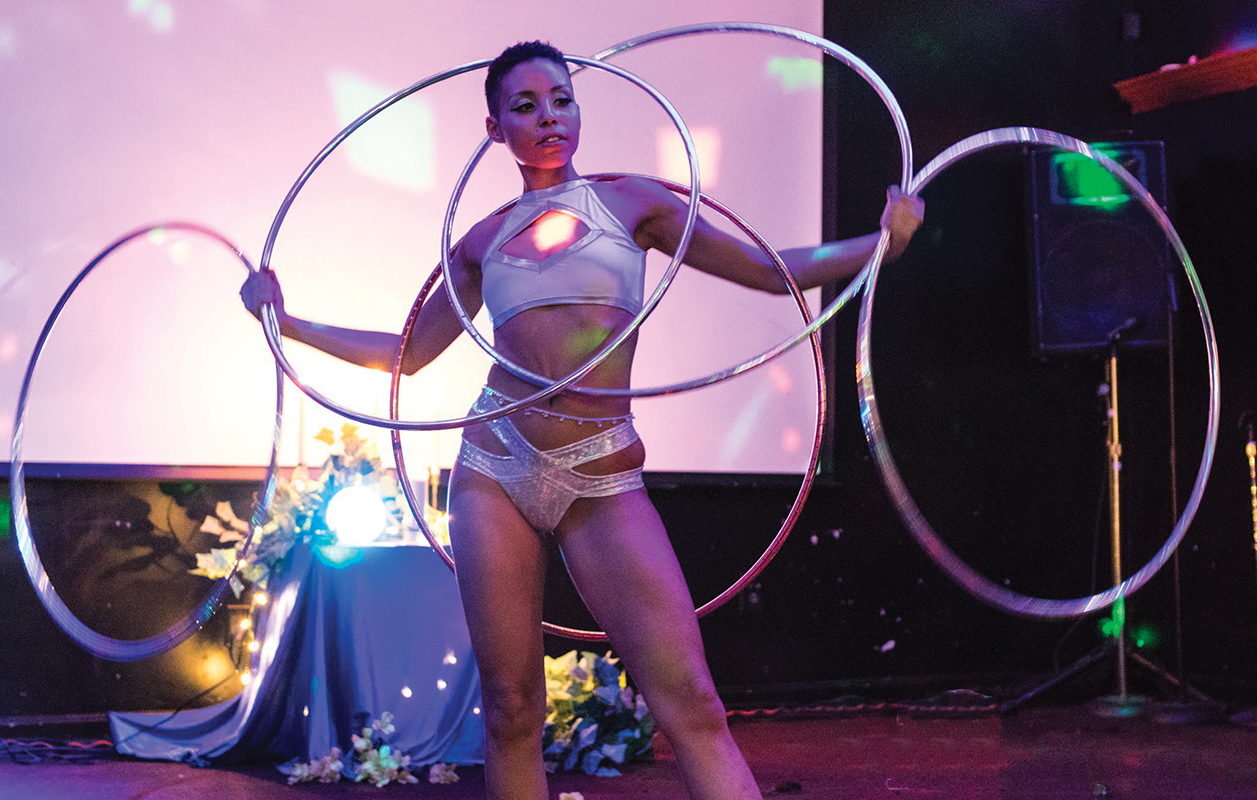 MAY THE 4TH: AN OUTER SPACE DANCE PARTY

On Saturday, May 4, sometimes known as Star Wars Day, local DJ company Scorpio Entertainment plans to transform the historic Terminal A Lobby at Washington National Airport into a spaceship-inspired cosmic dance party. Guests are encouraged to dress for the theme, with supplemental glow wear provided. In addition to music by DJ Edward Daniels and live entertainment by Baltimore’s hula hoop performer Zbu Hoopism and D.C.’s juggler Christian Kloc, this #Maythe4thDC party will feature an open bar, views of the runway, a Hot Pink Photo Booth, social media projection wall, a galactic LED light show, and the possibility of a surprise “real-life Sharknado moment above the crowd,” to quote Daniels, the company’s founding director, a native of rural southern Virginia who, incidentally enough, got his start in the area by hosting karaoke at Freddie’s Beach Bar. Party starts with a Twilight Pre-Show at 7 p.m. before Blast-Off at 8 p.m. Tickets are $65, with partial proceeds benefiting the local shelter and homeless-helping nonprofit Change for Good, Inc. Call 202-536-4495 or visit www.Maythe4thDC.com for more information.