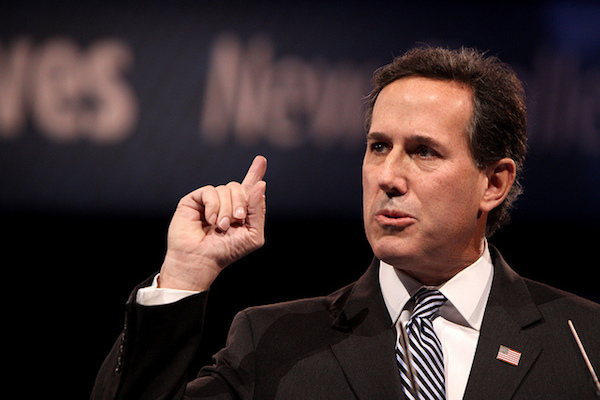 Rick Santorum has come to the defense of Mayor Pete Buttigieg after the presidential candidate was attacked by an evangelical Trump supporter.

Last week, Franklin Graham — son of evangelist Billy Graham — objected to Buttigieg talking openly about his Christian faith as well as his sexuality.

In a Facebook post, Graham wrote that Buttigieg “says he is a gay Christian. But as a Christian I believe what the Bible says.”

Graham then accused Buttigieg of ‘flaunting’ his sexuality.

“God’s Word defines homosexuality as sin, something to be repentant of, not something to be flaunted, praised, or politicized,” he wrote, adding, “The Bible defines marriage as between a man and a woman — not two men, not two women.”

However, while Graham is quick to point out the Bible’s position on homosexuality and marriage with regards Buttigieg, he has been notably silent when it comes to Donald Trump, who is on his third marriage and has been accused multiple times of infidelity.

That hypocrisy led to a somewhat bizarre situation on CNN’s New Day, when former Senator and CNN political commentator Rick Santorum took Graham to task for his words against Buttigieg, while also not criticizing Trump.

Santorum has a long and storied history of opposition to LGBT rights. He has previously said that marriage equality would have “profound consequences” for the world, said that he wouldn’t attend the wedding of a gay friend or relative, argued in favor of denying services to gay people, stated that he has a “problem with homosexual acts,” believes being gay is a choice, and compared same-sex marriage to pedophilia and bestiality.

When New Day host John Berman asked Santorum about Graham’s comments, Santorum was quick to respond that Graham’ had the right to say them.

“He is a religious leader. He is not a politician,” Santorum said. “He is talking biblically. He has the right to put forth what his faith is instructing him to day.”

But after Berman noted Graham’s hypocritical “relativism,” saying Graham was “calling on Pete Buttigieg to repent for being gay, yet [he’s] one of the most ardent supporters of the thrice-married President Trump,” Santorum agreed.

“I would say that you have every right to call him out on that,” Santorum said. “Because if he’s gonna say that about Pete Buttigieg, then he needs to when Donald Trump’s accusations come up about marital infidelity and other things that is equally as sinful. He should be equal and vociferous in calling out a similar sin.”

Berman asked if Santorum considered infidelity to be “a similar sin as being gay?”

“Well that’s what the Christian religion teaches,” Santorum said. “Both are violations of the traditional and sacred bonds of marriage, that outside of marriage is sinful behavior, yes.”

Later in the interview, Berman noted to Santorum that some will say a person chooses to commit adultery, but that people are born gay.

Santorum said that he and Graham follow what the church teaches, which is that both are sins.

Berman asked Santorum if he believes that people are born gay, to which Santorum responded, “You know, I’m not an expert in this area. I don’t know.”

Watch the exchange below: