"Shaft" leans hard on Samuel L. Jackson's movie-star persona, and the lighter side of its action-comedy heritage

Detective John Shaft casts a long shadow across movie history as the private dick who cemented the blaxploitation genre, and in pop culture as an icon of black masculinity, in or out of his badass leather trench coat.

Apparently the man’s aura casts too long a shadow for whomever names his movies. The new, gun-happy action comedy, directed by Tim Story, from a script by Black-ish creator Kenya Barris and The Goldbergs producer Alex Barnow, is the third film inspired by Ernest Tidyman’s Shaft novels to just be called Shaft (★★½).

Following the late, great filmmaker John Singleton’s so-so 2000 Shaft, this makes two for star Samuel L. Jackson, who carries his own legend, with a screen persona as well-known and firmly molded as that of any actor currently working. For this go-round as Harlem’s coolest cat who won’t cop out, Jackson dials his motherfu***r-meter up to 11, and just has a good ol’ time, as John Shaft leads the son he barely knows — John Shaft, Jr. (Jessie Usher) — through a hazardous, but mostly humorous, murder investigation.

JJ Shaft, a straight-laced MIT grad who works as an FBI data analyst, comes looking for his dad’s help after his best friend Karim (Avan Jogia) turns up dead. This is the sort of crime caper where, just moments after popping up for an impromptu reunion with their other childhood pal, Sasha (Alexandra Shipp), and announcing he’s been keeping “clean,” Karim’s dead of an apparent heroin overdose, and JJ’s on the case. Portrayed as a wide-eyed, tech-savvy desk jockey, JJ is the sheltered Millennial who requires lessons from the o.g. in how to work the streets and lay it down like a real man. That’s how this Shaft is playing it.

As a shepherd of film franchises, Story has a spotty record. He launched one decent film series with Barbershop, and doomed another with his Jessica Alba-starring Fantastic Four movies. Recently, he’s done well directing the Kevin Hart-Ice Cube Ride Along action-comedies, and he’s working squarely in that mode here, guiding Jackson and Usher’s engaging good cop/bad cop rapport. Allowing Jackson to do his motherfu***ng thing, Story keeps the action moving efficiently, despite a plot so circuitously wound that the Shafts have to explain it to each other more than once.

Not that any of the tangled web of old friends, ex-soldiers, drug runners, and suspected terrorists matters one bit. The flimsy murder mystery takes a backseat in Shaft’s smokin’ ’71 Chevelle SS, as the movie steers towards comedy, played up in the cross-generational banter between father and son. The movie tries to check Shaft for his old-school machismo and unevolved ideas about what women want from a man, while also celebrating his alpha maleness. He’s slick but uncouth, and not p.c. He never stops for traffic, traffic stops for him. And sure, Sam Jackson can make just about anything look cool, but always crossing against the light and oncoming cars is obnoxious. 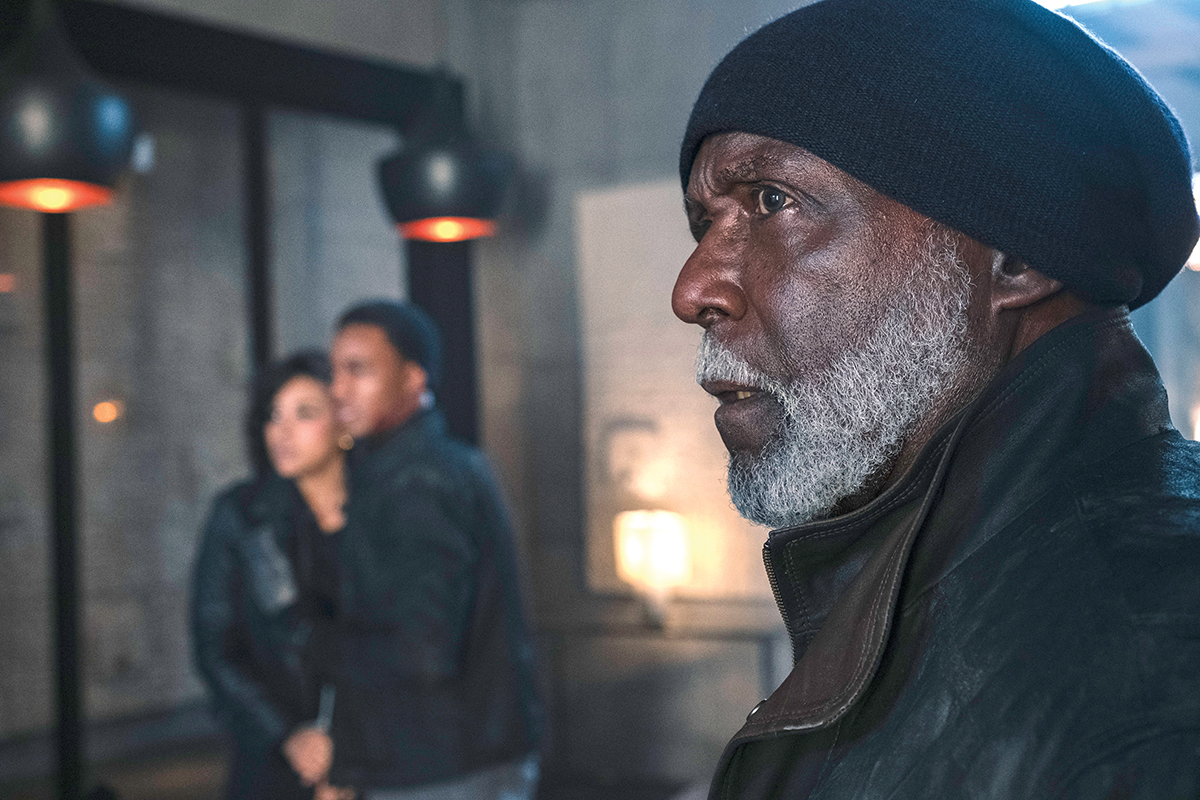 Shaft knows but he doesn’t care. The best thing the film does, besides nail a nice share of its jokes, is make a genuine story of Shaft learning to care about the example he sets for his son. JJ’s mom, played by the wonderful Regina Hall, had raised her son far away from Shaft in order to keep the boy out of harm’s way, and to ensure that he didn’t turn out to be anything like his dad. To no one’s surprise, father and son discover they have much to teach each other. Thankfully, the movie’s not too obvious about it, and Story doesn’t pour a drop of treacle into the cocktail of gunfights and family-time lesson-learning. He keeps it soulful, yet blasé, just like Shaft.

Jackson stays light on his feet in a role that suits his persona perfectly. Usher and Shipp — who’s so much better than her barely-there Storm in the recent disappointment Dark Phoenix — are cute together holding it down for the young lovers. Too much of them, though, and the movie starts to feel like Shaft Meets the Scooby-Doo Gang. Just in time, Shaft brings in the big gun: the original John Shaft, Richard Roundtree, who can still rock a long leather trench, and looks like he’ll pop one of these whippersnappers in the mouth if they get too cute.

André Hereford covers arts and entertainment for Metro Weekly. He can be reached at ahereford@metroweekly.com. Follow him on Twitter at @here4andre.
← Previous Story Film Review: ‘Pavarotti’ explores the life and legacy of a legend
Next Story → Documentary ‘Gay Chorus Deep South’ follows the San Francisco Gay Men’s Chorus into Trump country