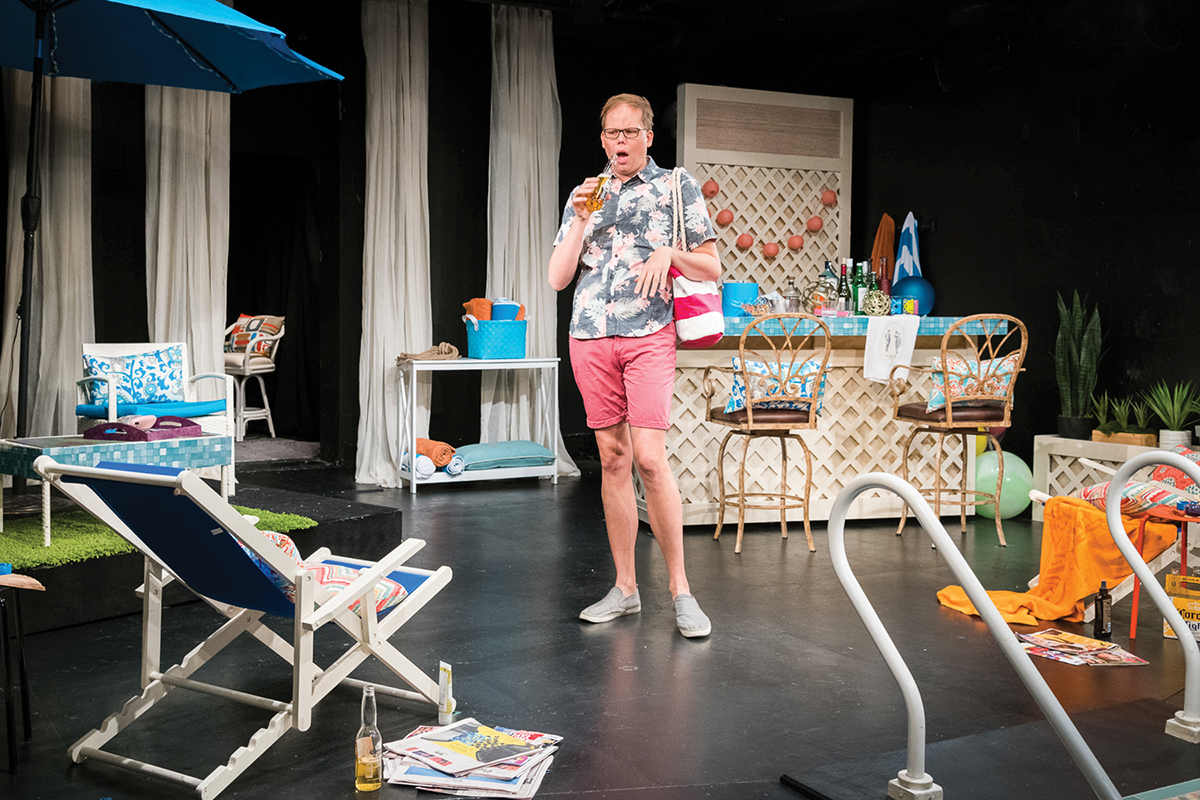 “Most of my career has been as a guest star, on television shows you’ve heard of and some you haven’t,” says Jeff Hiller. “I play a lot of gay ‘insert profession’ roles. A lot of gay customer service representatives that the main character meets and is bothered by.” Take, for example, NBC’s 30 Rock, when Tina Fey’s Liz Lemon went to her high school reunion. “I played the hotel concierge who was not good at his job,” says Hiller.

Among Hiller’s credits are The CW’s Crazy Ex-Girlfriend, MTV’s Boiling Points, and NBC’s Law & Order: Criminal Intent, as well as Netflix’s The Unbreakable Kimmy Schmidt. “One of the mole women, played by Sol Miranda, becomes a famous businesswoman, and I played her bitchy gay assistant Tomothy,” he says. “And then there was the ‘Sliding Van Doors’ episode later, where my character came back and it turned out I was a flight attendant with Jane Krakowski’s character.”

That wasn’t his first time portraying a flight attendant. “On 30 Rock, there was an episode where Tina Fey was dating Matt Damon and they break up on a plane that is stuck on the runway. I played the flight attendant…. I’ve played a flight attendant, I think, four times. I’m sure Channing Tatum has too, right?”

A native of Texas, Hiller moved to New York nearly two decades ago to pursue a career in performance. “I cut my teeth as an improviser, and then moved into stage work and film and TV,” he says. He’s a longtime member of acclaimed improv group Upright Citizens Brigade, co-founded by Amy Poehler, and is part of the company’s LGBTQ ensemble We Will Turn You Gay and also its signature stage show ASSSSCAT. Anticipating the next question, Hiller says, “I don’t know, it’s just a funny name.”

The 42-year-old has also appeared in a number of Broadway and Off Broadway musical comedies, including Bloody Bloody Andrew Jackson and Silence: The Musical, a spoof of Silence of the Lambs. “Not to brag, but I’m on four cast albums,” he says, with his other credits being a musical version of Shakespeare’s Love’s Labour’s Lost and an Encores revival of Lady Be Good.

At the moment, his focus is on performing Drew Droege’s one-man show Bright Colors and Bold Patterns at Studio Theater. Hiller succeeded Droege during the show’s hit Off Broadway run, directed by Michael Urie, and credits his comedy background with landing the role. “Because this is a show that really needs a comedian, but also a show that runs like a theater show, they wanted a comedian who had done theater,” says Hiller, who had previously worked with Urie on Ugly Betty and the shortlived, gay-themed sitcom Partners. “I am one of the very few who is both a gay comedian who also does theater.”

Hiller describes his character Gerry as someone “who has some really good points that he makes and then…some really awful points too [when] talking about modern gay life.” The show casts a critical eye on the heteronormative aspects of marriage equality and whether the result is a diminishing of our differences as LGBTQ people. As someone who married his partner in 2013, Hiller appreciates both sides of the debate.

“We as queer people are [not] boring, we’re not normal, we’re not plain, and we want to celebrate that difference, and I get that,” he says. “But also, if my husband died, I want the apartment, so I’m going to take it.”