More a solo composer-performer spotlight than a compelling drama, "Love Sick" sings in only fits and starts 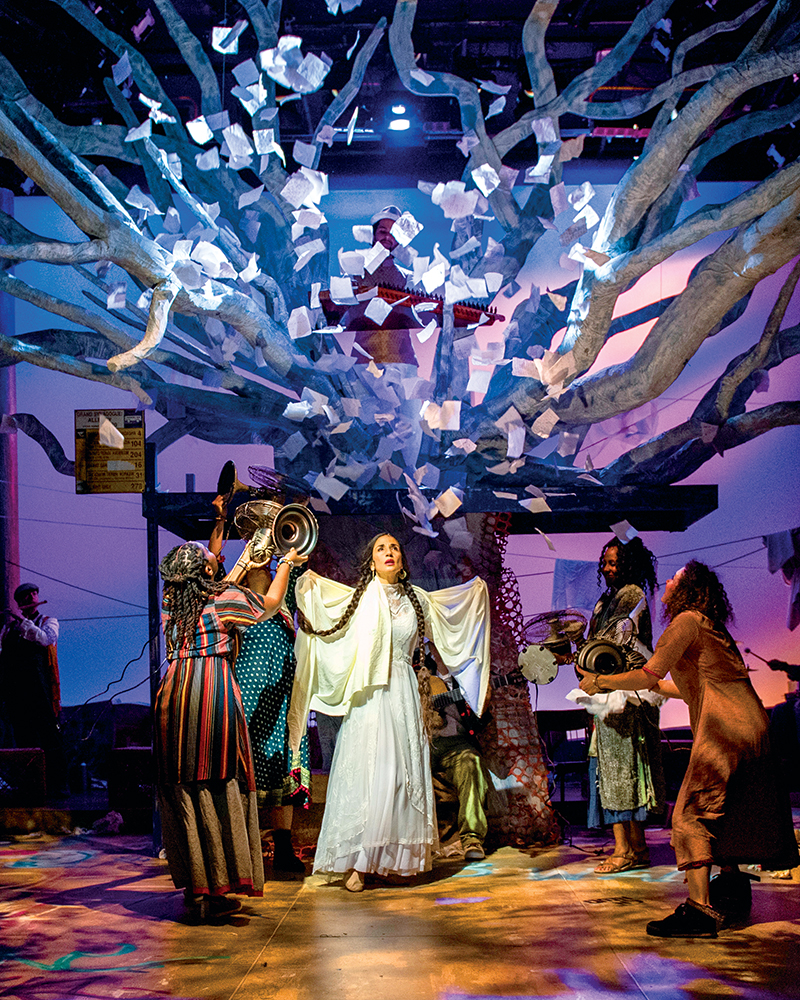 After a season’s sojourn away from the company’s own stage, Theater J returns to its newly renovated home at Edlavitch DC Jewish Community Center with an uneven production of Ofra Daniel and Lior Ben-Hur’s new musical Love Sick (★★☆☆☆).

Adapted from the biblical “Song of Songs” by Daniel — who also composed the score with reggae/world music artist Ben-Hur — Love Sick renders a timeless ode to desire as a clunky romance between the poetic Lover (Ali Paris) and young Tirzah (Daniel). Deeply involved as creator and performer, Daniel’s passion for the poetry and history pulses through her performance, but does not lend itself to a compelling characterization. Daniel holds the center of the show, not “Tirzah,” playing the story of this woman from Israel thrust into an arranged marriage with a kind, older fishmonger Husband (Sasha Olinick).

Tirzah’s exuberant sexuality makes her a target of derision for the gossipy chorus of Women of Jerusalem (Sarah Covey, Sarah Laughland, Kara-Tameika Watkins, Kanysha Williams), while also attracting the amorous attentions of the Lover, who writes to her anonymously. Translating the Lover’s poetry to song, Paris similarly does not so much find a character as merely convey the enticing language of the lyrics.

Paris better distinguishes himself through his contributions as a musician, and as music director of the nine-piece orchestra. The ensemble’s delivery of Daniel and Ben-Hur’s Middle Eastern-flavored score — with a special nod to Mila Weiss’ deft woodwind solos — might be the highlight of director Christopher Renshaw’s production. Olinick impresses, too, as Tirzah’s spouse, a man of the earth — or the sea, as it were — leading an amusing ensemble turn through “The Fish Song.”

Renshaw, Tony-nominated for directing the 2015 revival of The King and I, and choreographer Matt Cole create a handful of exciting tableaux. But, for the most part, the actors and their movement around the stage feel crowded out by the visual noise of Misha Kachman’s scenic design, and not well-captured by the lighting. Setting the story in a version of Jerusalem “unbounded by time,” the graffiti-marked walls, criss-crossed by clotheslines and strewn with litter and milk crates, evoke a contemporary, teeming town in the Middle East, but to no real consequence in this telling that succeeds more as a concert presentation than as a fulfilling dramatic interpretation of a beloved book of verse.

André Hereford covers arts and entertainment for Metro Weekly. He can be reached at ahereford@metroweekly.com. Follow him on Twitter at @here4andre.
← Previous Story DC Theater Review: ‘Fairview’ at Woolly Mammoth
Next Story → DC Theater Review: Heidi Schreck’s ‘What the Constitution Means to Me’