Film Review: ‘Maleficent: Mistress of Evil’ is a Fairy Fail

Visually splendid and a bit dim, in many senses of the word, Maleficent: Mistress of Evil (★★☆☆☆), takes after the none-too-swift romantic duo at its center, the formerly sleeping beauty Aurora (Elle Fanning) and her mildly charming beau Prince Philip (Harris Dickinson).

Among Disney princesses, Aurora has long gotten a bad rap for expressing only the bare minimum of personality beyond her beauty, and maybe that’s unfair. Not every fairy tale heroine has to wear her bookishness on her sleeve like Belle. However, fairness doesn’t account for the fact that, after two movies, Fanning’s iteration of Aurora hasn’t struck any chord for the character that rings louder than just “nice.” Aurora does rule kindly now that she’s Queen of the Moors, the lush, fanciful forest that’s home to her godmother Maleficent and various other fairies and whatzits. But she and her dull Philip usurp too much screen time from the film’s main attraction: Angelina Jolie, returning in the title role.

The 2014 blockbuster Maleficent invested in a sympathetic backstory for the great horned diva villain of the animated classic Sleeping Beauty. The sequel doubles down on defanging the mighty villain. This time out she’s perturbed that her now-revised story got twisted throughout the human kingdoms to cast her again as the baddie in a tale that actually ended with her as a hero. Despite the facts, humans regard her and other fairies with fear and suspicion, when, really, she’s not bad, she’s just drawn that way — and happens to be the victim of really bad press. (Any similarities to the film’s star should be read as purely coincidental.)

Jolie proves, as before, to be the ideal performer to render this arch, angular cartoon villain in lustrous flesh and blood, but, after a busy opening third of the film, Maleficent finds herself unduly sidelined by a roster of new characters and conflicts. Michelle Pfeiffer emerges as the film’s focal point playing Philip’s unsparingly ruthless mother Queen Ingrith. Not even Ingrith’s own son is safe from her nefarious plan to control every kingdom and exterminate all fairies. 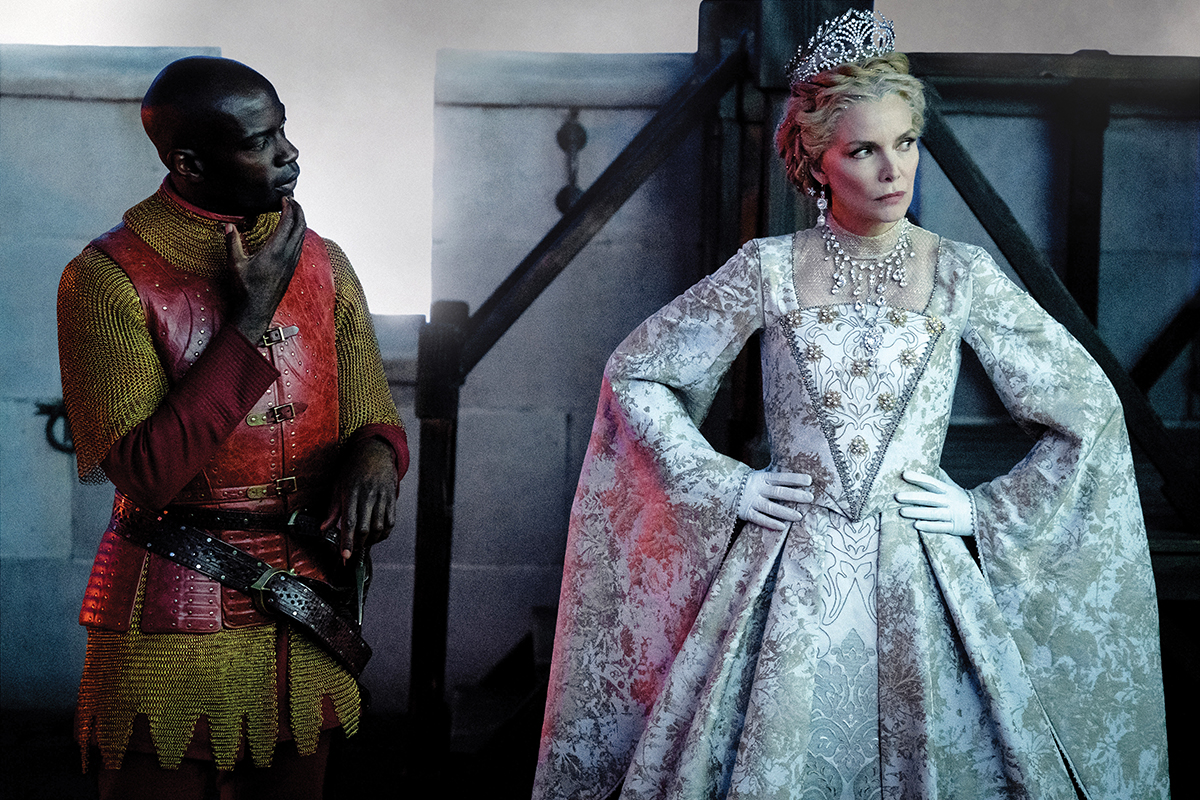 We might be persuaded to support her anti-Philip policies — he’s a stiff, as portrayed by Dickinson, replacing Titans star Brenton Thwaite, who played the prince in the prior film. Dickinson made a memorable big-screen debut as a sexually confused Brooklyn teen in the award-winning 2017 indie drama Beach Rats, but does nothing too memorable as Philip, the most oblivious prince in a whole world of kingdoms. If Philip becomes collateral damage, so be it, but Ingrith’s scheme to rid the world of all those fabulous fairies is far more terrible to contemplate — although it does offer a juicy alternative reading of the plot.

The story of a misunderstood and fashion-forward fairy who, once upon a time, had her wings clipped before she found herself, reclaimed her power and spread her wings, the continuing chronicle of Maleficent is equally viable as crypto-homo camp or big-budget action-adventure. And dialogue like one character’s declaration that “we are not defined by where we’re from, but by whom we love” only reinforces the interpretation that this woke Sleeping Beauty is advocating for every kind of fabulous creature.

At one point, Maleficent wakes up inside the cavernous refuge of the Dark Fae — fairies who, like her, sprout powerful horns from their heads, giant vulture wings from their shoulder blades, and cheekbones that could slice a starfruit. They come in every race and every gender presentation, some even have rainbow-tinted wings, and they’re led by hunky, tattooed he-fairies Conall (Chiwetel Ejiofor) and Borra (Ed Skrein). The pair appear to be just friends, and Borra and Maleficent steal several meaningful glances, but who knows what’s really going down in that rainbow fairy cave.

Onscreen, not much action happens inside that cave. One particular sequence, crosscutting a frantic battle between human and fairy armies back at the kingdom and Maleficent and comrades slowly wrapping up a subplot back in the Dark Fae realm, emphasizes just how drawn out director Joachim Rønning’s action setpieces can seem. Ultimately, the sequel offers about an hour of intriguing plot stretched across a two-hour parade of plotting queens, ditzy asides from CGI woodland folk, and elaborate costume and creature design. If you plan to drink every time some queen mentions saving the fairies from hateful humans trying to kill them all, the time should fly by quickly.