ACLU says all student groups must be allowed the same right to free speech, including "political" speech 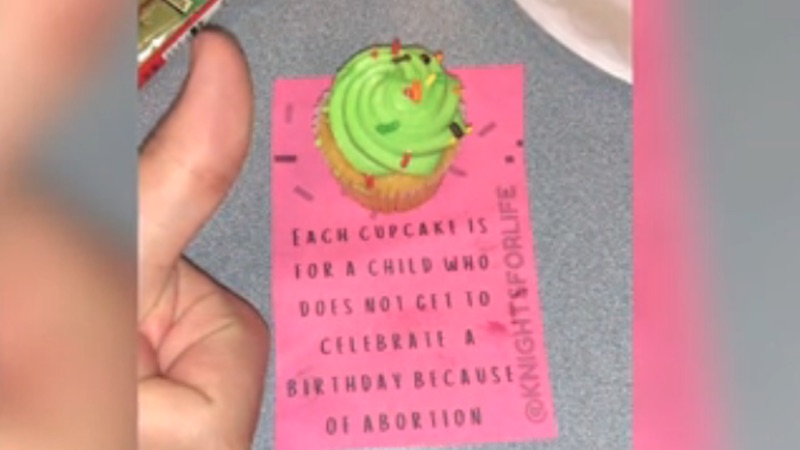 A Pennsylvania high school is being accused of political bias after a pro-life group was allowed to distribute cupcakes bearing a political message, but allegedly stopped an LGBTQ club from forming because it would be considered “political.”

Knights for Life, a student-led, pro-life club that is an arm of the national Students for Life of America club, handed out free cupcakes to students at Norwin High School in North Huntingdon, Pa., last week as part of National Pro-Life Cupcake Day on Oct. 9.

On that day, students across the nation hand out free cupcakes in order to start conversations with their fellow students about the topic of abortion.

The cupcakes came with a message reading: “Each cupcake is for a child who does not get to celebrate a birthday because of abortion.”

But according to CBS affiliate KDKA, some students complained about the fact that the pro-life students were allowed to communicate a political message — opposition to abortion laws — while LGBTQ students must call their club the “diversity club” and cannot be explicit about their LGBTQ identity, because it might be considered too “political.”

Norwin High School denies it has prevented students from forming an LGBTQ club, saying it’s always been known as the diversity club.

Dr. Jeff Taylor, the superintendent of the Norwin School District, which serves children in Irwin, North Irwin and North Huntingdon, told KDKA that Knights for Life specifically asked for, and was given, permission to distribute the cupcakes and flyers by the school’s principal.

“The 20 members of the club are passionate about the club and its mission and are respectful in their participation and distribution of materials,” Taylor said in a statement.

The American Civil Liberties Union of Pennsylvania agrees that Knights for Life has a right to hand out the cupcakes and make political statements opposing abortion, but the school must extend the same right to other clubs.

“Apparently, there is some form of LGBT club that was not allowed to call itself what they wanted. That is a violation,” says Vic Walczak of the ACLU of Pennsylvania. “These are kids who are learning about the Constitution, learning what citizenship means in this country, and if their constitutional rights are violated, then they should have recourse.”