Spotlight: Jaysen Wright in ‘The Royale’ 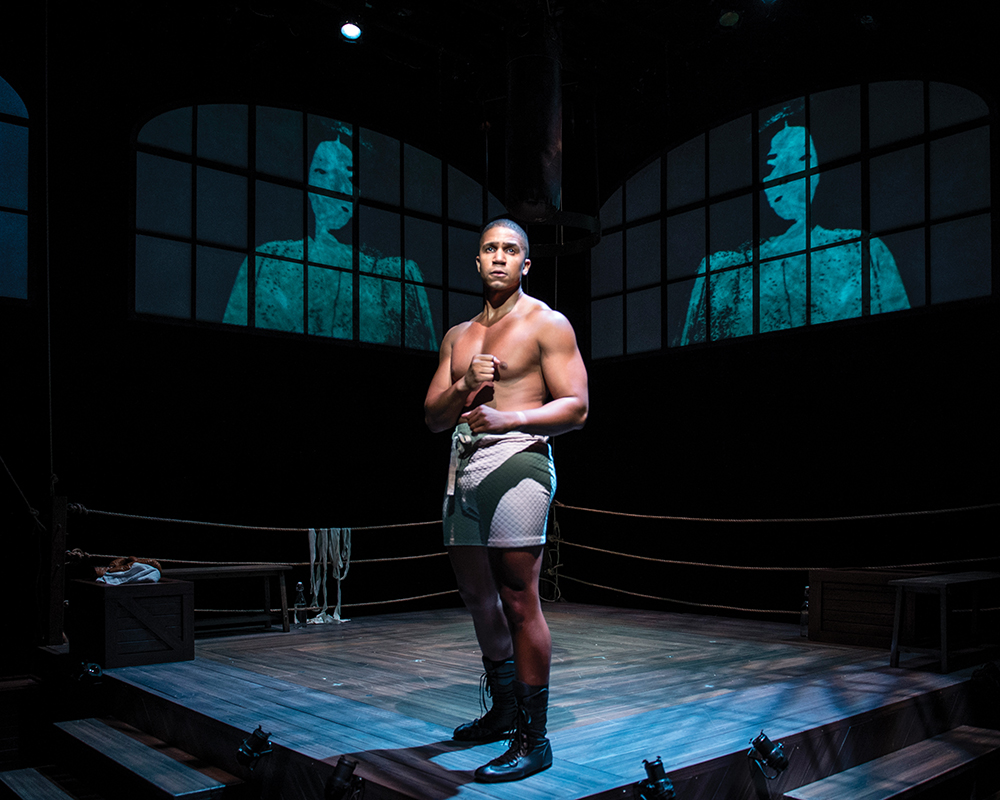 Inside a starkly lit boxing ring, two muscle-bound pugilists trade blows before a cheering crowd. Champ and challenger dodge and weave across the mat in well-choreographed slow-motion, performing an impressionistic, theatrical take on the brutal violence of the real deal.

At the center of the ring, actor Jaysen Wright dances forward to throw what could be the decisive jab in director Paige Hernandez’s powerfully kinetic production of The Royale, currently at Olney Theatre.

Wright stars in the 1st Stage co-production as boxer Jay “The Sport” Jackson, a fictional version of fighter Jack Johnson, who in 1908 became the first black heavyweight champion of the world.

A sports hero like none this nation had known, Johnson defeated so-called Great White Hope Jim Jeffries in the 1910 “Fight of the Century,” igniting race riots from Colorado to Columbus to Washington, D.C.

In Marco Ramirez’s play, this Jackson approaches his own Fight of the Century aware that the pride he spars for inside the ring could cost his community and his family dearly outside of it.

For Wright, stepping into the monumental role of an athlete who carries the weight of a nation’s hopes or fears on his shoulders required the actor to step up his physical training.

“I’ve done a lot of stage combat professionally, but this is the first time with boxing specifically,” he says. “So I joined a boxing gym in addition to my own gym. Then, in addition to our fight choreographer, we had a fight consultant come in — a guy who runs a boxing gym — to run us through drills and give us pointers.”

In addition to studying archival footage of Jack Johnson in action, the cast also had to master the play’s distinctive synchronized dialogue and movement.

“The script is super rhythmic, so it was a really hard script to memorize,” says Wright. “I don’t have problems with memorization usually, but it’s a lot of one line and then the ensemble will go, ‘Ha.'”

Technically precise, yet fluid in its storytelling, The Royale builds to pivotal scenes not just between competitors, but also between Jackson and a woman in his corner, Nina, played in a riveting turn by Lolita Marie, whom Wright praises as “an amazing actor.” In a play about impressive athletic feats, Wright agrees that the emotional blows between Jackson and Nina truly resonate.

“So much of the rest of the play is this really different, stylized work,” he says. “But what I love about that scene is that’s like a book scene. That it’s just two people talking, and it manages to bring in all of the tensions that are bubbling up outside of the boxing ring itself.”

André Hereford covers arts and entertainment for Metro Weekly. He can be reached at ahereford@metroweekly.com. Follow him on Twitter at @here4andre.
← Previous Story DC Theater Review: ‘Dog Sees God’ at Prologue Theatre
Next Story → DC Theater Review: ‘Everybody’ at Shakespeare Theatre