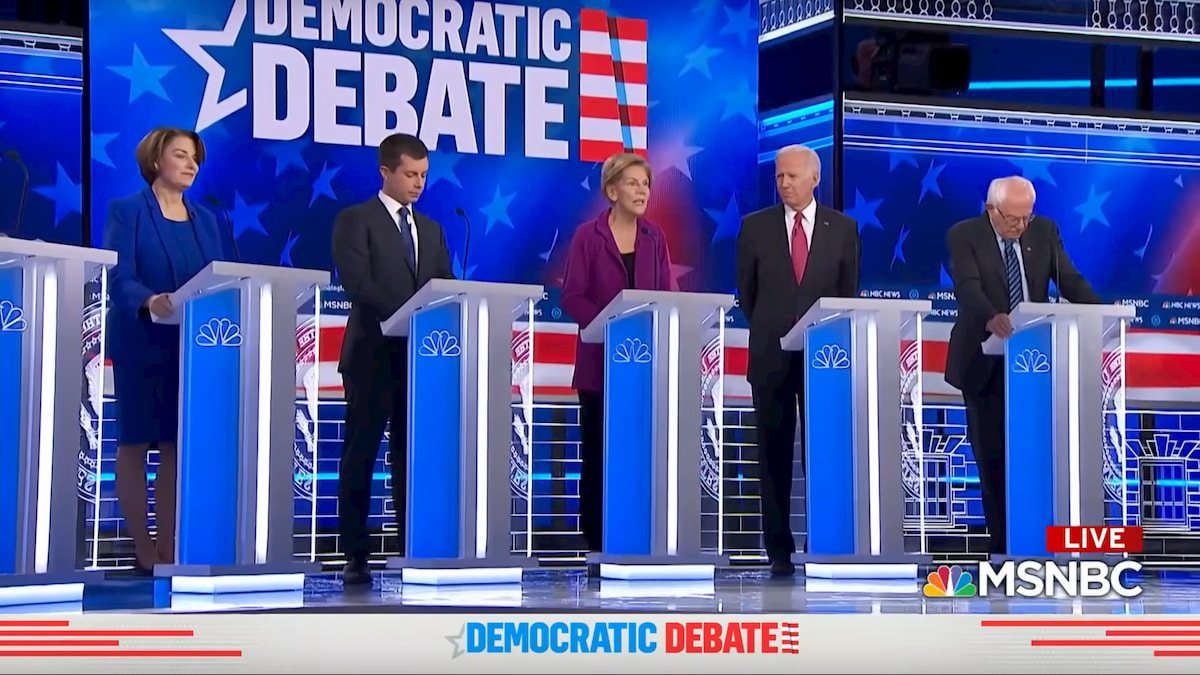 The fifth Democratic presidential debate concluded without a single mention of the epidemic of violence against the transgender community, despite taking place on Transgender Day of Remembrance.

At least 22 transgender people have been killed so far this year — most of whom were transgender women of color — but during the two hours of the MSNBC-Washington post debate, neither the four moderators nor the ten candidates on stage mentioned anti-trans violence.

LGBTQ media organization GLAAD slammed the omission of anti-transgender violence or any acknowledge of Transgender Day of Remembrance from the debate.

“Another Democratic debate has come and gone, and there were still zero direct questions about LGBTQ issues — not even a moment to recognize today’s Transgender Day of Remembrance and the lives we’ve lost due to the epidemic in anti-trans violence,” said Sarah Kate Ellis, President and CEO of GLAAD. “It is a slap in the face to LGBTQ Americans that not one of the candidates nor the media could join in mourning the at least twenty-two transgender women of color killed this year in anti-transgender violence.”

Ellis continued: “Trans issues, specifically violence against transgender women of color, is an issue at the heart of the LGBTQ community — and it’s time for a leader who will work to stop the violence that trans people face.”

GLAAD had previously urged the 2020 candidates to acknowledge Transgender Day of Remembrance during the debate and asked them to share how they planned to deal with the epidemic of violence against the trans community.

The organization also highlighted that LGBTQ issues overall have been largely absent from the Democratic debates, noting a New York Times graph showing the most spoken about issues which found that — while health care, foreign policy and immigration topped the list — LGBTQ rights failed to even warrant inclusion.

A number of the 2020 candidates did acknowledge Transgender Day of Remembrance prior to the debate. Sen. Kamala Harris noted the number of transgender Americans, particularly women of color, who have been killed, saying, “We can never stop saying and remembering their names.”

In 2019, at least 22 transgender Americans—mostly Black trans women—have been targeted and murdered. We can never stop saying and remembering their names.

On Transgender Day of Remembrance, we must recommit to seeking justice for the lives taken and ending this epidemic. #TDOR

Mayor Pete Buttigieg said he was “thinking of them and those whose deaths may never be reported. We must all commit to building a country where transgender Americans are safe, equal, and free.”

At least 22 transgender and gender non-conforming people have been killed in America this year. Tonight, I’m thinking of them and those whose deaths may never be reported. We must all commit to building a country where transgender Americans are safe, equal, and free. https://t.co/mUfDdBLWCD

Sen. Elizabeth Warren retweeted a message from her campaign containing the names of the transgender people killed so far this year, saying “we re-commit to ending this epidemic.”

On Transgender Day of Remembrance, we #SayTheirNames, and we re-commit to ending this epidemic. #TDoR https://t.co/6mTLM2grTq

Sen. Cory Booker tweeted that anti-trans violence has “claimed far too many lives — many whose names we’ll never know.”

“To those who continue to face discrimination & violence due to transphobia: I see you, I love you, & will never stop fighting for you,” Booker continued.

Hateful acts of anti-trans violence have claimed far too many lives—many whose names we’ll never know. Today we honor them. To those who continue to face discrimination & violence due to transphobia: I see you, I love you, & will never stop fighting for you. #TDoR2019

TDoR has since evolved to become an annual day of action in more than 20 countries worldwide, memorializing those lost to violence and other actions, and including vigils, services, marches, and other activities.

Chick-fil-A reverses course, says it might donate to anti-LGBTQ organizations in future

Rhuaridh Marr is Metro Weekly's managing editor. He can be reached at rmarr@metroweekly.com.
← Previous Story Chick-fil-A reverses course, says it might donate to anti-LGBTQ organizations in future
Next Story → Brian Sims has dedicated his life to achieving equality — and he won’t stop until it happens