Less is more in Matthew Gardiner’s simply terrific production of the quintessential Broadway musical about Broadway musicals, A Chorus Line (★★★★★). Gardiner plants the show’s lead interlocutor Zach (Matthew Risch) amidst the audience at Signature Theatre, just where a musical director might sit as he or she peers godlike from the darkness at a line of performers auditioning onstage. Thus, we’re all party to Zach’s gloriously grueling process of demanding that the seventeen assembled actor-dancers — or, are they dancer-actors? — bare their talents and weaknesses for the sake of pleasing him enough to get hired for the potentially career-making show he’s casting.

Aside from the meta touch of big-time Broadway director Zach seated several rows deep in the house, the ebulliently entertaining presentation is pretty straightforward. Or rather, it’s straight sideways, as that long, gorgeous line of dancers extends across Jason Sherwood’s broad, paneled music box set. Lit becomingly from beneath and above by Adam Honoré and costumed with distinctive personality by Sarah Cubbage, the main cast of auditioners creates a formidable line, whether still or in motion.

Gardiner is full of clever ideas about where each character should move or be at any given moment. And Sherwood ensures they’re always seen, via a stripe of mirrored panels lining the rear of the set, reflecting the performers from every physical angle, even from above when the time arises.

Then it’s up to the cast to reflect as sharply as possible all the angles and aspects we can’t as readily see, and almost uniformly they do so generously. From the start, Risch’s Zach sets a brisk, straightforward tone as the man in charge of how things will proceed. He approaches the eager assembly with care and knowing humor, yet Zach is just enough of an asshole to maintain a fearful authority. He’s also alternately kind and encouraging enough to earn the performers’ confidence. In short, he’s a credible director, and a vital key to unlocking the stories behind every hopeful artist onstage.

There’s Sheila, spicy veteran of many a chorus line — and maybe she’s not hopeful anymore, so much as fully present in her attitude that a job is a job and she wants this one. Maria Rizzo, fiery veteran of many a Signature musical, gives Sheila a grit that feels earned, plus that little chip on her shoulder that you just wish she knew how to brush off. It’s a riveting portrayal of sweet and sour self-sabotage, wrapped in a glam black leotard, accented by the unexpectedly touching softness of Sheila’s solo in “At the Ballet.”

She shares the “Ballet” stage with Jillian Wessel’s appealing Bebe, and an intriguing Maggie, played by Kayla Pecchioni, who sings the part superbly. Adena Ershow delivers a darling Val, the surgically enhanced center of one of this nine-time Tony-winning show’s most memorable tunes, “Dance: Ten, Looks: Three,” otherwise known as “Tits ‘n’ Ass.” With little more than well-aimed withering glances, Ershow and Rizzo fabulously embellish the minor subplot of an ongoing rivalry between pert, blonde Val and snarky Sheila. On the other hand, as married auditioners Kristine and Al, Elise Kowalick and Vincent Kempski beautifully demonstrate on “Sing!” the art of working in perfect time with your partner.

Gardiner and choreographer Denis Jones have the cast flowing in pretty much perfect time, and making the hard stuff look effortless, as in the moment when the “Ballet” trio of Maggie, Sheila, and Bebe each step smoothly back into position, as the line opens to include them. This cast looks great spinning and kicking in thrilling unison through “One,” the signature number of Marvin Hamlisch and Edward Kleban’s celebrated score, or in impressive solo numbers like Trevor Michael Schmidt’s exhilarating turn as Mike performing “I Can Do That.”

Song after song, the dances fill the stage with grace and athletic prowess, set to the exquisite sound of music director Jon Kalbfleisch’s 10-piece orchestra. Gardiner and company strike the powerful frequency of blending life into art, in a show that demands actors play dancers being themselves, freely baring their souls and insecurities for the sake of pleasing an audience.

A Chorus Line runs through January 5 at Signature Theatre, 4200 Campbell Avenue, Arlington. Tickets are $40 to $103. The show is nearly sold out, though some single tickets remain, and there is a daily online lottery at TodayTix.com. Call 703-820-9771, or visit www.sigtheatre.org.

A Chorus Line at Signature Theatre 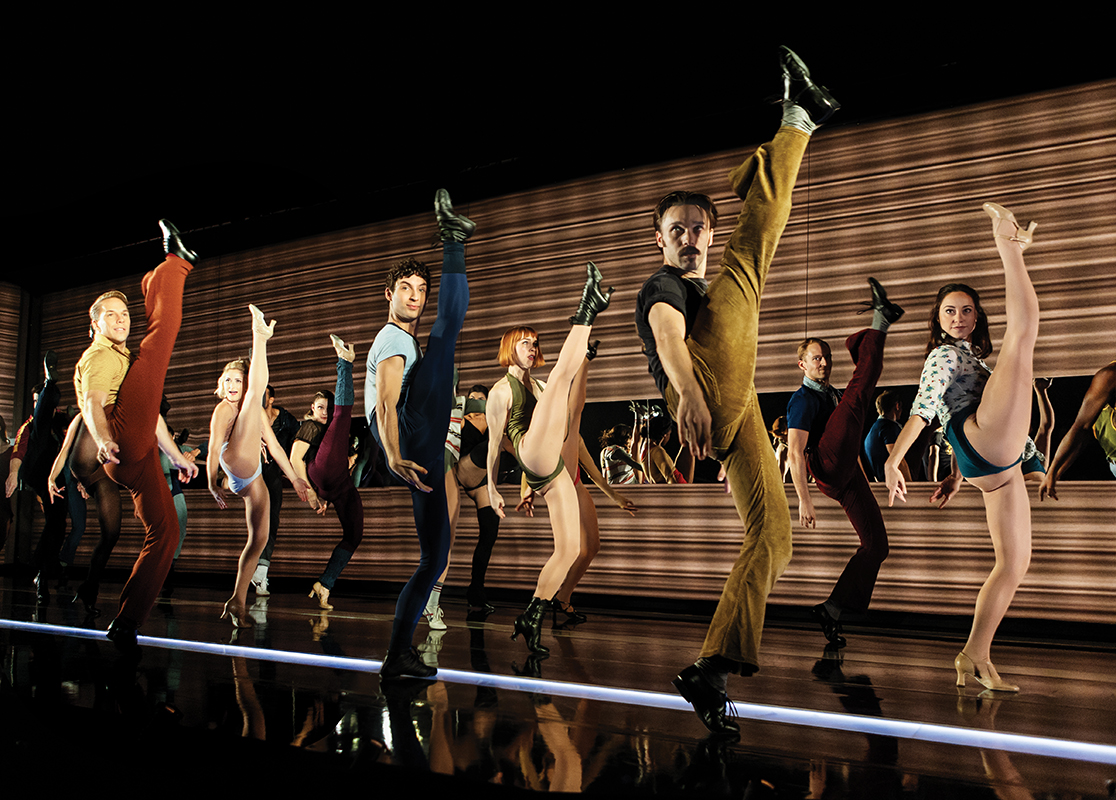 André Hereford covers arts and entertainment for Metro Weekly. He can be reached at ahereford@metroweekly.com. Follow him on Twitter at @here4andre.
← Previous Story DC Theater Review: Blue Camp
Next Story → Review: ‘Amadeus’ at Folger Theatre