Factory 449 puts forth an impassioned, if occasionally overwrought, "Agnes of God" 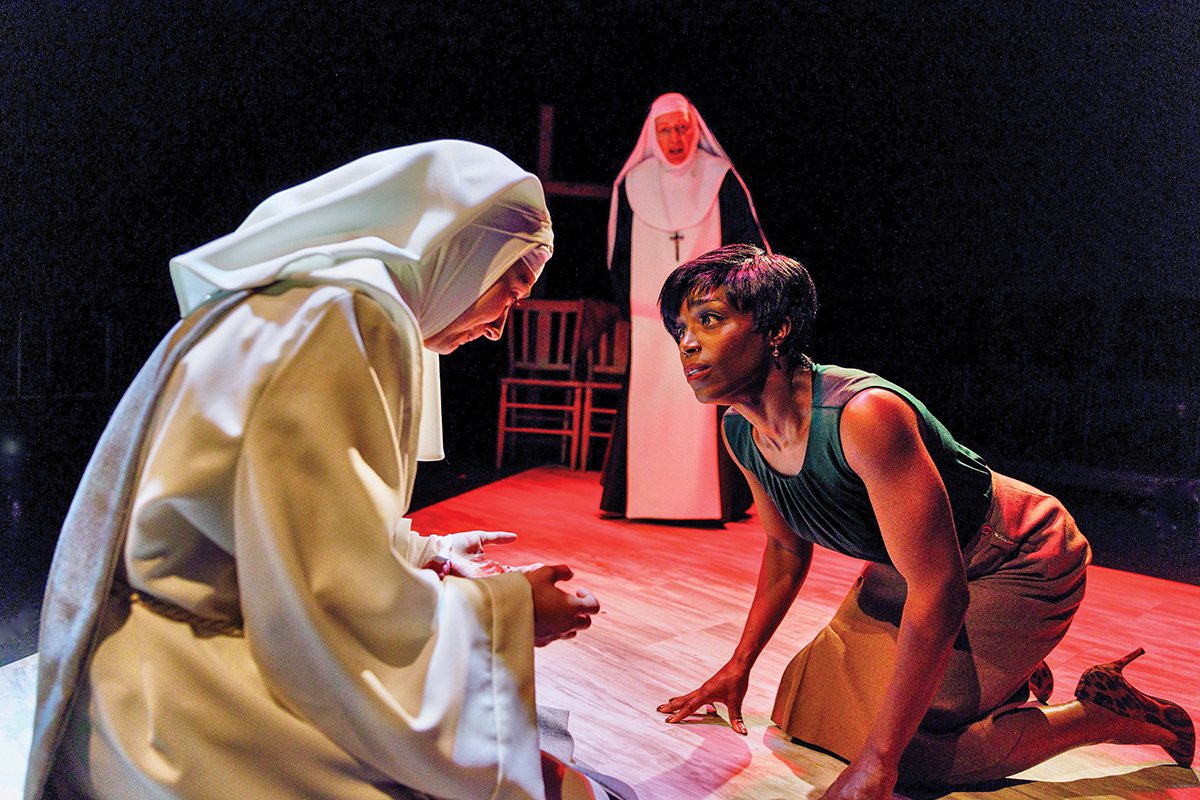 The inscrutable Sister Agnes, under investigation for manslaughter in John Pielmeier’s Agnes of God (★★★½☆), presents a fascinating enigma that’s never firmly resolved in the play. Even after carefully guarded details of her shocking case are revealed, and forgotten events are painfully recalled, Agnes remains obscure, as unknowable as the secrets of the spiritual universe. It’s one of the 1979 play’s many virtues, rendered well by Rick Hammerly’s taut Factory 449 production and featuring a deft performance by Zoe Walpole in the title role.

Accused of taking the life of the newborn apparently no one was aware she was carrying, Agnes might be as simple and timid as she seems, or she might be a devious liar. She seems sincerely devout but it’s unclear whether she truly believes she’s a holy vessel of God’s love, as some in her convent choose to believe. She could just as likely be insane, or traumatized by abuse, or all of the above. Walpole responds to the multi-faceted question of Agnes by making all these possibilities at some point or another feel true. She gives Agnes the awed, airy voice of a dyed-in-the-wool lamb of god, yet in a grounded fashion lays bare this woman’s flesh and blood fragility.

The production focuses on the quandaries Agnes’ divine or disguised pregnancy, and murdered child, raise for her Mother Superior Miriam Ruth (Nanna Ingvarsson) and the court-assigned psychiatrist, Dr. Martha Livingstone (Felicia Curry), who valiantly tries to determine what actually happened. Hammerly and set designer Greg Stevens focus the actors’ energies, and the attention of the audience towards the center of a three-sided stage. Still, the performers’ best efforts don’t always sync up.

The ball passes quickly between Martha, Miriam Ruth, and Agnes, as they volley big ideas and bigger emotions, and Ingvarsson could stand to tighten her grip. However, she has a powerful grasp on Mother Miriam’s climactic breakthrough, and warms up nicely alongside Curry’s Dr. Martha in a lighter scene, that originally appeared only in the Oscar-nominated 1985 film adaptation. Curry’s shrink, oddly attired for this assignment in a leather moto jacket and jaguar-print pumps, serves a solid purpose throughout as audience surrogate, working to unravel the mystery of Agnes. Curry’s performance aptly expresses the doctor’s frustration, a not uncommon one, that even if she learns all the facts, she still might not ever know the truth.

André Hereford covers arts and entertainment for Metro Weekly. He can be reached at ahereford@metroweekly.com. Follow him on Twitter at @here4andre.
← Previous Story Review: ‘Amadeus’ at Folger Theatre
Next Story → Review: Olney’s Singin’ in the Rain